New legislation to tackle the scourge of ticket touting has been proposed with tickets for Ed Sheeran's upcoming Irish gigs at the 3Arena already being offered for sale for massively inflated prices.

In some cases tickets were fetching as much as €1000 even before they went on sale on sale to the general public earlier today.

A fan presale of tickets for Ed Sheeran's much anticipated Irish gigs in April sold out earlier this week, while a second presale for Three customers took place on a day before Thursday's general sale.

But already fans are for being offered a pair of tickets for the concerts on resale sites for multiple times their face value for well over €800, while some are fetching as much as €1000. 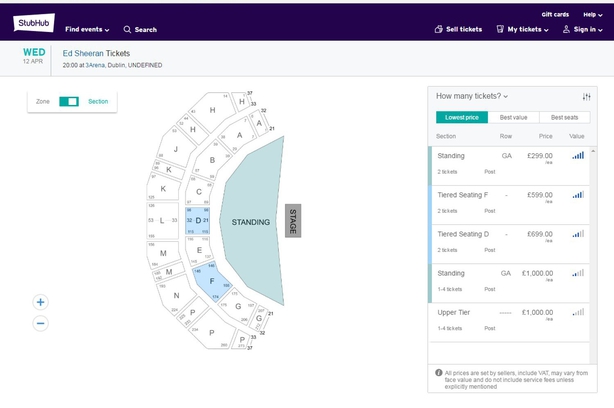 A number politicians recently said the law needs to be tightened to tackle touting following the outcry over U2 concert tickets which were offered for sale on secondary sites for multiple times their original value immediately after the gig sold out.

Fans were left fuming after thousands of tickets turned up on resale websites within seconds of Croke Park selling out, with some selling for over €1,000.

Now Fine Gael's Noel Rock and Independent TD Stephen Donnelly have put forward legislation in the Dáil to clampdown on the practice.

The proposed bill aims to prohibit the resale of tickets for concerts and sporting events for more than their face value.

Deputy Rock said legislation was necessary because regulation was not functioning. He said it was based on Belgian legislation which has had a positive effect, while Deputy Donnelly said it was reported that the profits from ticket touting were linked to Dublin based paramilitaries.

Last week the government's Competition Watchdog, announced that it was launching an investigation into suspected anti-competitive conduct in the ticketing industry.

The Consumer Protection Commission said it will investigate whether competition law has been breached in relation to the sale of tickets and the operation of ticketing services for live events.