The album that has soundtracked millions of lives now has an entire book devoted to its magic. We meet its author.

While most of the talk about music biographies in 2016 has centred on Bruce Springsteen and Johnny Marr's memoirs, there are plenty of other treasures out there just waiting to be discovered - and devoured.

One of them is Matt Taylor's Back to the Front, which tells the story of the making of Metallica's 1986 album Master of Puppets. A record which set a new benchmark for metal, it sounds as fresh today as it did 30 years ago, and every time you listen you manage to get a bit of your own youth back. The same goes for reading Taylor's book - having previously tackled the making of Steven Spielberg's Jaws, he's managed to catch metal's very own Great White hook, line and sinker.

Bringing together band and fan recollections, with photos ranging for Polaroid grit to pro-shot class, Taylor chronicles everything from the build-up to the recording sessions to the subsequent tour, celebrating in-the-moment abandon, seat-of-the-pants creativity and take-no-prisoners talent along the way. It's quite the rush.

But Taylor also goes into great depth about the tragedy at the centre of the story: the death of Metallica bassist Cliff Burton in a tour bus crash in Sweden in September 1986. Back to the Front is the most fitting of tributes to Burton's musical genius, and also an opportunity for fans to wonder about what might have been - while also celebrating all the good stuff too. 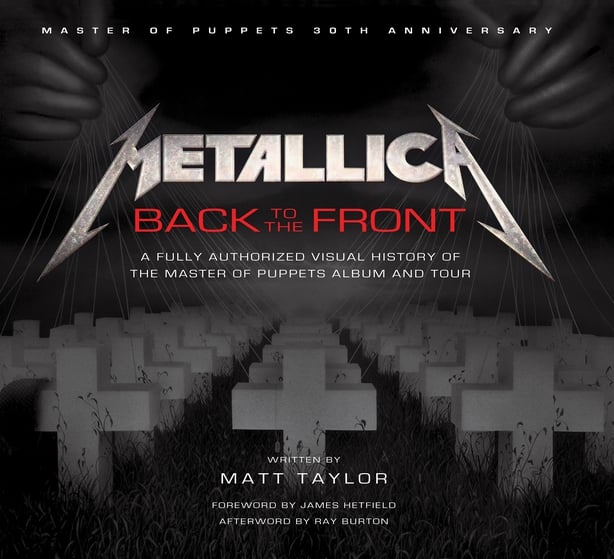 Here, Matt Taylor tells RTÉ Entertainment's Harry Guerin about the making of the book of the album.

Harry Guerin: What was your own introduction to Metallica and Master of Puppets?
Matt Taylor: I guess around 1985 or early '86: reading the rock music magazines like Metal Edge and Kerrang! because of bands like Iron Maiden and Kiss, which I was really into at the time. And there was this band of goofy-looking guys with a funny name I didn't know how to pronounce that I kept seeing, and so I guess I became aware of them that way.

But it was, I think, Spring of 1986 when I first heard someone playing the song Master of Puppets, and thought, 'Wow... so that's what that difficult-to-pronounce-band sounds like!' It was the slow, melodic part of Master of Puppets that I walked in on, and thought it sounded like a heavy metal symphony. Just so melodic, which I loved.

How long from the light bulb moment of thinking about the book to having it in your hand - and what were some of the twists of fate along the way?
Almost three years. Twists of fate? I guess the band themselves getting more and more involved. I didn't expect that at first.

So many of the photos haven't been seen before, and the background info is fascinating. Was it a case of 'kill your darlings', where there was great stuff you had to leave out?
Only in that a handful of photos were submitted, but couldn't be used because they were scanned at too low a resolution. Lots of people don't realise the whole 'scanning at high res' thing, scan them low, toss the originals, and then are surprised when their photos look terrible in print or can't be used.

Were there wild goose chases to track down stuff, where you wondered did it really exist? Is there anything still out there, somewhere?
Yes. Some stuff took me a year or more to track down. I'd see photos posted online and then take many months emailing all around trying to figure out who owned them, and then getting them to scan from the originals.

I've read that when warming up in the studio in Copenhagen to make Master of Puppets, Metallica recorded covers of The Misfits' Last Caress and Green Hell with Cliff Burton. Despite everything I had read about the band since 1987, it was 26 years later when I discovered this. So have you heard them?
I looked into this quite a great deal, and in the end, concluded that those two songs were not recorded, but were played over and over again in the studio in order to get the sound levels right. I may be proven wrong some day, but that's how it seems, now.

The book brilliantly captures the very moment when Metallica went from underdogs to a phenomenon - 'We're going to need a bigger boat', if you will. In your interviews with the band, did you get the sense that they now look back on making the album and touring before Cliff passed away as the time of their professional lives?
Yes. I think they even say so at some point in the book. Of course, they didn't realise it at the time. In hindsight, I think they definitely feel that way - James [Hetfield, singer-guitarist] and Kirk [Hammett, guitarist], at least.

Who, for you, is the unsung hero of the Master of Puppets story?
The original Metallica fans! I did my best to bring them into the book to weigh in on their passion for the band.

Given Jason Newsted's huge role in the Metallica story as the bassist who 'replaced' Cliff Burton, did you consider including his thoughts about hearing the record as a then-fan in another band?
I didn't want to cover anything beyond the accident and its immediate effect on the band. Jason entering the fold was the beginning of a whole different feel and vibe, which I didn't think belonged in this book. I also wanted the majority of the book to feel very 'up' - like a party - and losing Cliff was sort of the end of the party in a way, and so I avoided getting into that era.

Hindsight is a wonderful thing. Did you get a sense talking to the band that they feel they rushed back into it all too soon after Cliff's death? Not that Jason wasn't 100 per cent the right person for the impossible job, but that they should've got to know each other better before heading out again?
Yes, I think certain members of the band and management feel that way. [Manager] Cliff Burnstein told me he always has felt a bit guilty for pressing them to get on with it so quickly, but what were they going to do? They were on the brink of super-stardom, and in the middle of a very important tour. They had so much invested in the album, and promoting it, and to just sit around for months wouldn't have been a good thing, career-wise. That's the professional standpoint. The personal one is that they should have sat it out for a while.

As you get older, does it amaze you more and more how young Metallica were when they made Master of Puppets?
I barely had the sense to get out of the rain at that age - 19, 20, 21. It's amazing how focused and disciplined they were then at that age. And capable of writing such amazing songs.

What memories of your own came flooding back while working on the book?
Memories of freedom, and not being a slave to impossible deadlines!

If there's another book you could write about the 'making of' an album, what album would it be?
Not sure about an album - something KISS related. I'm not so much into historical writing. I only like to do it if it's in coffee-table book format, where the text is balanced out with tonnes of cool, rare photos. My medium of choice is old snapshots. I love their look. I'm not sure if you know this, but I design my own books - Jaws: Memories from Martha's Vineyard and Back to the Front. I'm much more a designer than a writer. I don't think I'd ever write a text-only book.

Could your arm be twisted to do a book about Metallica's follow-up to Master of Puppets, And Justice for All?
Hmm. Not sure. I think I'd rather get on with my own stuff. By that I mean not writing about other people's work, but creating my own fictional stuff.

So what's coming next for you?
Not sure. Maybe a graphic novel - I hope!

Matt Taylor's Metallica: Back to the Front: A Fully Authorized Visual History of the Master of Puppets Album and Tour is published by Insight Editions (and you're going to need a bigger shelf)