Rockers Guns N' Roses will make a return visit to Slane castle next summer after a twenty five year absence.

The band will perform at the Co. Meath venue on May 27th 2017. The announcement was confirmed by Alex and Tamara Mountcharles, the children of Lord Henry Mountcharles, at a press conference in Dublin city centre this morning.

The concert is the first on the reformed band's 35-date Not In This Lifetime World Tour, which takes in venues across North America and Europe.

The gig will mark the twenty fifth anniversary of their last gig at Slane when they performed there back in 1992.

At this morning's press conference, Tamara Mountcharles said that she was just a one year old when Guns N' Roses last played there venue and she added that she didn't think she'd see the band play Slane again in her lifetime.

The band reunited in April to play the Coachella festival in California. Although they never officially broke up, lead vocalist Axl Rose had been the only original member left in the band since bassist Duff McKagan and lead guitarist Slash left in the 1990s.

The Coachella show was the first date to be officially announced by the revived band, whose songs include Sweet Child O' Mine and November Rain. 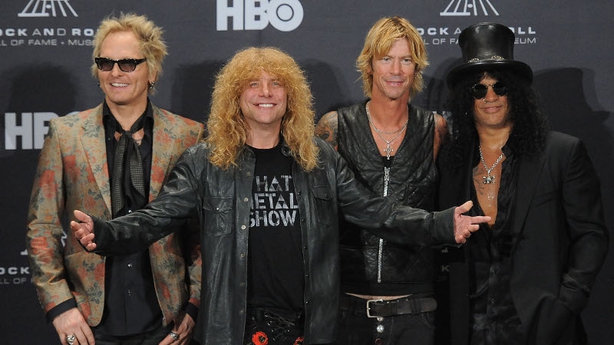 However, the band sorted out their differences during the past couple of years and in an interview earlier this year Slash said: "It was probably way overdue, you know ... it's very cool at this point."

The last gig at Slane was in 2015, when the Foo Fighters headlined along with support from the Kaiser Chiefs, Hozier and Ash.

Tickets are priced from  €89.50 including booking fee for Guns N' Roses at Slane and go on sale on this Friday, December 9 at 9.00am.