While many voters and observers in the United States and around the world have been left reeling after Donald Trump's surprising victory in the Presidential election others have found refuge in humour.

A host of hilarious memes have been surfacing on Twitter, imagining what outgoing President Barack Obama and his Veep Joe Biden have been plotting to prank Trump when he finally makes it to the White House. 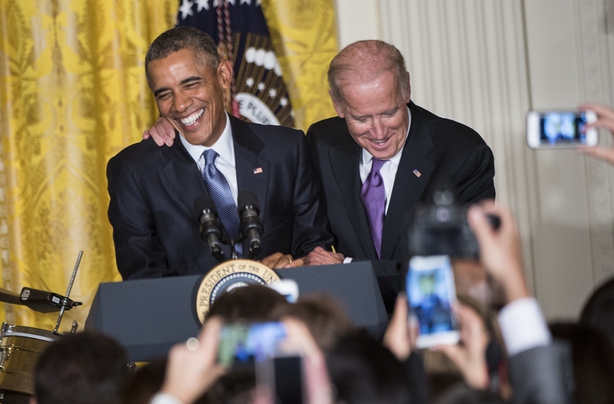 If the Twitterati are anything to go by, the duo are like a pair of giddy schoolboys dreaming up a whole host of escapades to confound and embarrass the new President and his Vice President Mike Pence.

Though based on these examples it does seem as if Biden is the ringleader.....

Obama: Did you replace all the toiletries with travel size bottles?
Biden: He's got tiny hands Barack, I want him to feel welcome here pic.twitter.com/e7NRIZ43Ww

Obama: "Joe, why are you still holding my hand?"
Biden: "I wanna freak Mike Pence out"
Obama: "But why?"
Biden: "Just roll with it" pic.twitter.com/o5KZZ0Ysgz

Biden: I painted "Michelle Obama 2020" on your bedroom ceiling

Biden: What if we paint the Mexican flag in the office
Obama: Joe, no
Biden: I already ordered the paint
Obama: Joe pic.twitter.com/mCCh6OPQRk

Biden: mikey, i have to tell you something

Pence: what is it

Biden: ive hidden whoopee cushions under all the chairs in the white house pic.twitter.com/PNbdoDx3kW

Joe: I told trump that there was important meeting in a room but it was a broom closet & now he's locked in there