U2 frontman Bono has joined female luminaries from the worlds of business, politics, human rights, fashion and sport to be named in Glamour magazine's Women of the Year list for 2016.

He will be honoured as Man of the Year at a ceremony in Los Angeles on November 14.

The magazine is recognising the U2 leader for his work on the rights and needs of women and girls who live in extreme poverty around the world. Last year, the singer and his One campaign launched a 'Poverty is Sexist' movement, armed with facts and figures.

In a letter to world leaders, Bono and numerous other celebrities, such as Robert Redford and Grey's Anatomy creator Shonda Rhimes, called it an outrage that girls account for 74% of all new HIV infections among adolescents in Africa.

Speaking to the Press Association, Glamour's editor-in-chief Cindi Leive said: "We've talked for years about whether to honour a man at Women of the Year and we've always kind of put the kabash [sic] on it.

"You know, men get a lot of awards and aren't exactly hurting in the celebration and honours department."

She added: "But it started to seem that that might be an outdated way of looking at things, and there are so many men who really are doing wonderful things for women these days. Some men get it and Bono is one of those guys."

In a statement through Glamour on Tuesday, Bono said that the battle for gender equality won't be won unless men step up and lead alongside women. "We're largely responsible for the problem, so we have to be involved in the solutions," he said.

Asked how Bono's wife, Ali Hewson, reacted to the news, Leive said: "Apparently he turned to his wife and broke the news and she told him, 'Eh, I think you still have some work to do'."

In its Man of the Year citation, Glamour magazine said: "Bono, 56, has an extraordinary talent not just for music, but for tackling problems that seem intractable - and making mighty gains. In 2004 he co-founded ONE, the international volunteer advocacy organisation that has helped get lifesaving AIDS drugs to millions of people in Africa.

"And now Bono has created Poverty Is Sexist, a campaign specifically aimed at helping the world's poorest women - those who survive on less than $2 a day. The campaign's first order of business: to document a clear link between poverty and gender, and send that data to every president and prime minister in the world.

"That report motivated leaders to donate an additional $13 billion to the Global Fund to Fight AIDS, Tuberculosis, and Malaria, which will help save the lives of millions of women and babies.

"By establishing Poverty Is Sexist, Bono is making it clear that powerful men can, and should, take on these deep-rooted issues. 'The battle for gender equality can't be won unless men lead it along with women,' he says. 'We're largely responsible for the problem, so we have to be involved in the solutions'." 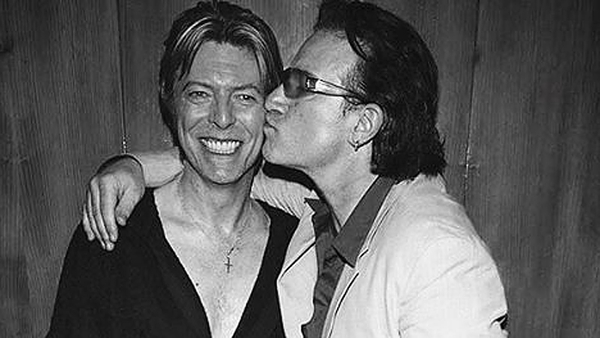 Bono says Bowie was his idea of a rock star