Alan Hughes has said he is "happy and proud" after tying the knot with his long-term partner Karl Broderick.

The TV3 presenter and his partner of 23 years entered into a civil partnership in 2011 at Dublin's Unitarian Church, today wed in a secret ceremony.

Alan’s brother Kevin and Karl’s sister Ann were present as witnesses for their nuptials and Hughes joked that he hopes his family and friends "don't kill us" for not being invited to the intimate ceremony. 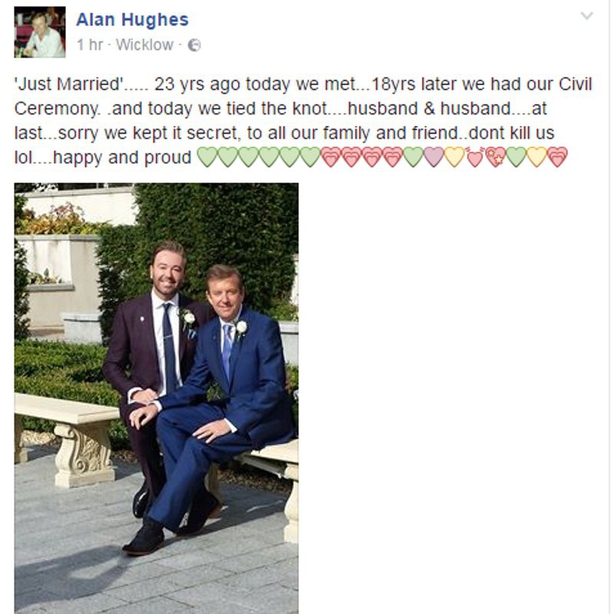 The couple's wedding may have been a private affair but their proposal was quite the spectacle.

Hughes left Broderick "gobsmacked" in November last year when he proposed live on air on TV3's Ireland AM.

The TV host and Broderick were talking to Sinead Desmond and Mark Cagney during a special feature on same-sex marriage and how things have changed in Ireland over the past 20 years, when Hughes took Broderick by surprise by going down on one knee and proposing.

Speaking to RTÉ Entertainment shortly after the proposal, Hughes said he felt it was the "perfect time" to pop the question as the Marriage Bill had been signed into law.

"I'm really happy not only for us but for marriage equality and gay people in general that this week has finally come. It seems so long since the referendum and finally it's come into law, now people can finally be married."

The TV3 host said Ireland AM has been his TV family for the past 16 years, so it was "the right place to be this morning for the week that was in it".