Glee star Jane Lynch has paid tribute to the welcome she has received in Ireland in recent days, saying she is leaving "the ole sod with a full and happy heart".

The Irish-American was invited to Ireland by University College Dublin's Literary and Historical Society (L&H) and Drama Society and received the L&H's James Joyce Award, which is presented to those who have achieved outstanding success in their field. Previous recipients include Roddy Doyle, Rory O'Neill, JK Rowling and Emeli Sandé.

Speaking to Ray D'Arcy on RTÉ Radio 1, the Illinois-born performer described the honour as "a terrific thing for me".

"I welcomed the trip to Dublin," she continued, "and I met some really great folks over there at UCD."

Slán, Dublin. Thank you so much @ucddublin for the #dramasoc James Joyce honor. I depart the ole sod with a full and happy heart. pic.twitter.com/EJ6aojW2FT

Lynch told D'Arcy she had been "hanging out in Dublin for the last four or five days". She had also visited Sligo, "seen a bunch of plays" and attended two shows at the National Concert Hall.

Lynch said she was sad to be leaving on Wednesday as she had enjoyed herself so much. "I'm doing more culture here than I ever do at home," she said.

Asked by D'Arcy about her Irish heritage, Lynch said her father's family hail from Swinford, Co Mayo and that she had traced her roots on a trip to Ireland 20 years ago.

"I actually ran into a woman who is now in her 80s who my grandmother was a babysitter for," she revealed. "My mother's side of the family, the Carneys, I'm not sure where they're from. They've been in the States for quite a while."

As I leave Ireland, the home of my ancestors, I wish my late great old Dad, Frank Lynch, a very Happy Birthday. He would be 93 today. pic.twitter.com/eA7UJ8quNp

D'Arcy inquired whether Lynch had ever been approached to take part in TV genealogy show Who Do You Think You Are?, and Lynch's response was suitably droll.

"About two years ago they approached me and I said 'yes'. You know, they don't do a show unless they find something really fascinating, so obviously they never found anything fascinating! They never came back to me again!

"They actually did a trip to see my aunt who's first-generation American. She provided them with all [the information] - she's the family historian. Who knows? Maybe someday they'll stumble upon something that's vaguely interesting!"

Lynch said the "UCD kids" had told her all about this weekend's All-Ireland Football Final replay, but that the green and red of Mayo were not colours that suited her.

@janemarielynch thank you so much for coming to UCD and getting a picture with me, you turned my crappy day into a wonderful one xo pic.twitter.com/CDAopitzxQ

Lynch will be back on screens next month when the comedy Mascots premieres on Netflix on October 13. The new film, which reunites Lynch and Best in Show director Christopher Guest, is set in the cutthroat world of sports mascots and also stars Chris O'Dowd.

"It's really fun; it's about the world of the non-professional mascots," she explained. "They take themselves very seriously, like all of the subcultures Christopher Guest focuses on."

"Chris O'Dowd is really wonderful in Mascots too," she added. "He's the bad boy of 'mascotery' as he calls it." 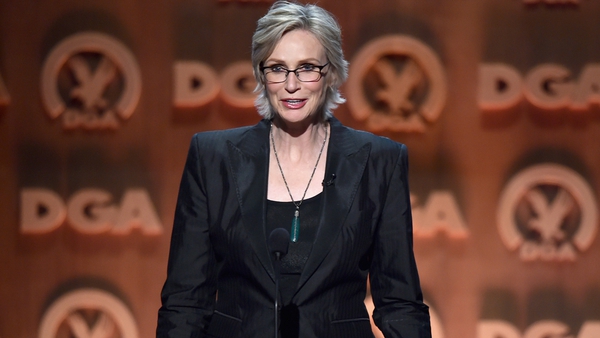