Michael Leader, the actor who played the milkman in EastEnders since the soap began in 1985, and who was known to movie fans around the world as the stormtrooper who bangs his head in the original Star Wars, has died.

Leader passed away on Monday with the EastEnders cast and crew saying they were "terribly saddened" to hear of their much-loved colleague's passing.

Our dear friend and colleague Michael Leader passed away on Monday. He will be greatly missed.#EastEnders pic.twitter.com/z42Ic1CbGD

"Michael has been on the show since the very first episode and will be sorely missed by the EastEnders family, past and present," they said in a statement.

Leader worked on EastEnders for 16 years before he said his first line. That moment arrived when he asked Albert Square resident Charlie Slater "Is this yours, Squire?" as he dropped off his drunken daughter Kat who had hitched a ride on the milk float.

"I'm happy I've got my little break and I'm very, very pleased to still be in the show after all these years," he said at the time.

"I just work at EastEnders and have done for 16 years - it was very exciting to twinkle for a few seconds among an array of stars."

Fans recently saw Leader driving Walford matriarch Peggy Mitchell (Barbara Windsor) around in his milk float during her final week on the show. 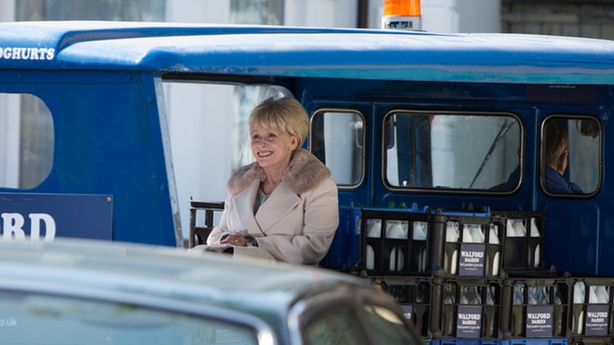 Leader's golden stormtrooper moment in 1977's Star Wars: A New Hope is one of the most celebrated goofs in cinema history.

Star Wars supremo George Lucas even paid tribute to the iconic scene in 2002's Attack of the Clones when character Jango Fett ducks to avoid bumping his head on the door of spacecraft Slave I at the end of a fight scene.

The 2004 DVD release of the original Star Wars trilogy also enhanced the sound of the stormtrooper banging his head.

Among the EastEnders actors who paid tribute to Leader were Bonnie Langford, who described him as "a true gentleman and 'old pro'".

Jonny Labey, who played Paul Coker in the soap until recently, described him as "the kindest, most supportive man I've met".

Other EastEnders stars also took to social media to express their sadness:

So sorry to hear about Michael Leader.
A gentleman to the last.
He will be missed by many.
With fond memories always from John.

R.I.P Michael Such a lovely man and a true gentlemen 🙏💕