Donald Trump is lampooned in a new clip released from The Simpsons, where Homer and Marge debate over who to vote for in the forthcoming US presidential election before opting for his Democratic rival.

The couple are in bed together, when Marge says that she "can't make love until I've decided who to vote for".

Recalling Hillary Clinton's infamous campaign ad from 2008 a voiceover then asks the question: "It's 3am and the phone is ringing in the White House - who do you want to answer that call?"

Bill Clinton is first seen answering the phone with: "The situation room? I'll be right there."

His face drops when he realises the call is for his wife Hillary, saying "Oh, it's for you." She snaps back: "Yes, from now on, it's always for me." 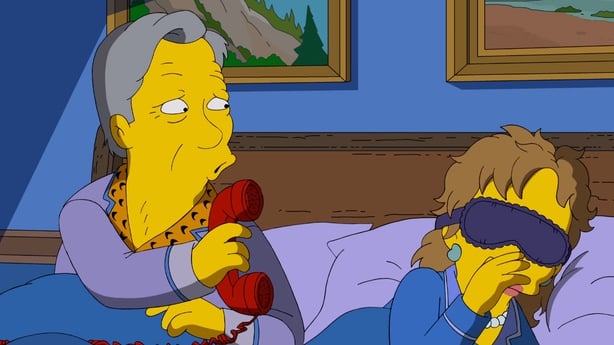 Bill and Hillary Clinton in The Simpsons

Republican candidate Trump, who is in bed with a Great Speeches by A. Hitler book, is none-too-pleased to be at the receiving end of a similar phonecall from the situation room, saying irritably: "Not now, I'm on Twitter."

He then makes some demands over the phone to one of his aides, saying: "Put my name on the Lincoln memorial, disband Nato... and make me some scrambled eggs on a gold plate."

When he realises the importance of the situation room emergency, his team of helpers come running in to prepare him to leave his bedroom, injecting him with botox, giving him an orange spray tan and using a puppy as a hair piece.

At the end of the clip when Homer indicates that he might vote for Trump, Marge says: "If that's your vote, I question whether I can ever be with you again." As ever Homer listens to his wife and does an about-turn, declaring: "And that's how I became a Democrat."

The ad ends with the sign off: "Paid for by Americans who are really starting to miss Obama."