Her nude selfies may have been widely mocked - Bette Midler said she would have to "swallow the camera" to show something we haven't seen already - however Kim Kardashian's pics at least have the unwavering support of her husband.

Kanye West has said he's all for his wife taking naked pictures of herself and even went so far as to say that Kim sharing nude selfies is like Adele singing.

During a recent interview with Harper’s Bazaar magazine, the rapper chatted about his wife’s talent for nude selfies and said depriving the world of them would be like Adele refusing to use her golden voice.

"I love her nude selfies. Like, I love the ones from the side, the back ones, and the front. I just love seeing her naked; I love nudity."

He went on to say, "And I love beautiful shapes. I feel like it's almost a Renaissance thing, a painting, a modern version of a painting. I think it's important for Kim to have her figure. To not show it would be like Adele not singing."

The pair were photographed together for the September issue of the magazine. However, they suddenly seemed to become very coy when they were asked to name a a favourite Taylor Swift song.

The couple are involved in a very public feud with American sweetheart Swift over the lyrics to West's song Famous, which included the contentious line: "I feel like me and Taylor might still have sex, I made that b**** famous", which led to accusations of misogyny and whether Swift had actually given her blessing.

When asked to name a favourite Swift song, West replied "For me? I don't have one," while Kardashian added pointedly: "I was such a fan of hers."

Maybe though Swift can take some consolation from another revelation made by West to the magazine:

"Here's something that's contrary to popular belief: I actually don't like thinking," he said. 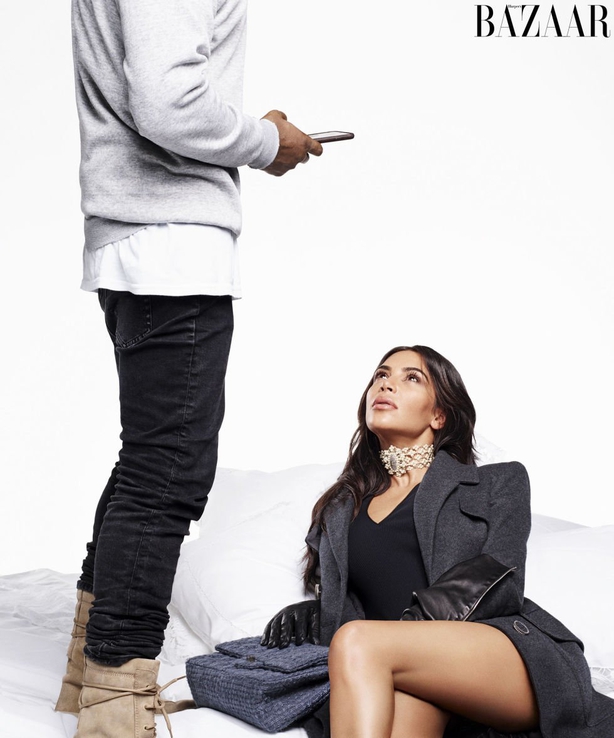