Sweetie! Darling! Dress it up anyway you want, but Absolutely Fabulous: The Movie is not quite a Bolli-wood classic, says fashion victim Alan Corr

Dress it up anyway you want but Absolutely Fabulous: The Movie is just sooooooo last season. Scrap that - it’s just sooooooo first season of Absolutely Fabulous from 1992. Already relics by the time of their last outing for a Christmas special in 2012, Patsy and Edina return to an even more complicated world, a place where death by social media is possibly a worse fate than being seen in double denim.

Our dipso fashion victims are still living in grandiloquent self-delusion in a palatial pad in West London: PR maven Edina is struggling to hang on to her clients (a “boutique” vodka, Lulu and Baby Spice) and Patsy’s fashion mag is losing its lustre so when they hear that Kate Moss, who’s ageing nearly as well as Joanna Lumley, has fired her PR, it is time for Edina to pounce. 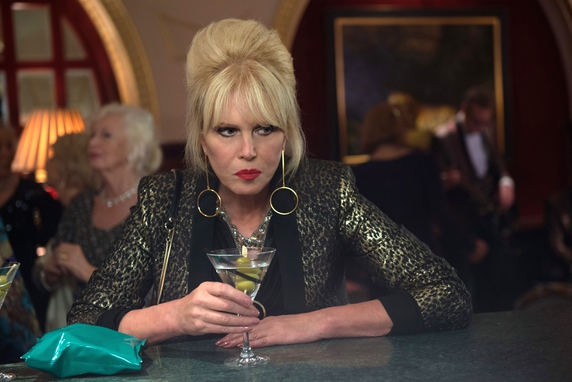 Lumley is imperious as Patsy, the agitated but elegant lush

However, her encounter with La Moss ends badly when the supermodel is pitched headlong into the Thames and her certain death inspires Diana-like levels of national mourning. Even the grave-faced Orla Guerin is brought on to capture the sheer, terrible awfulness of this truly global event and this is where Ab Fab: The Movie is most fun. Edina and Patsy dash around town in blind denial and A and Z listers break down in public, as long as there's a TV crew nearby.

Not even a night with the bong, goodly servings of Bolivian marching powder, and boutique vodie can blot out the reality. Hunted by the police and paparazzi, Patsy and Edina finally have all the attention they’ve always craved but for all the wrong reasons and so Ab Fab: The Movie follows the well-beaten (to death) path of all Brit-coms turned movies - it travels abroad. To the glittering opulence of the South of France, to be exact, where the duo hope to land a life of luxury among the decrepit playboys of the Côte d’Azur. Sensible old Saffy is back as Edina's long-suffering daughter

Saunders and Lumley are, as ever, brilliant as the ultimate grotesques in a business of grotesques. Lumley is imperious as Patsy, the agitated but elegant lush, and Saunders remains a true sitcom classic as Edina, the frumpy friend whose miscomprehension of everything ever was always one of the Ab Fab’s biggest attractions.

Much needed ballast and Botox is provided by the countless cameos. Genuine stars, Z listers, designers (Gaultier, McCartney et al), hangers-on, and reality TV eejits crowd nearly every scene but the best walks-ons come from Rebel Wilson as a budget airline hostess and Jon Hamm, who is aghast to meet Patsy again many, many years after their first encounter in New York in the even more garish 1980s.

The hideousness and uselessness of PR and the vacuity of red carpet greet `n’ grins have been better sent up in better and funnier films but in many ways, Ab Fab is the original of the species and so why wouldn’t they lash on the clichés about a business of clichés like MAC foundation? It’s their party and they’ll cry till their mascara runs if they want to.

There is a brilliant scene about using something called “hand money” instead of plastic, which really should enter real world slang, and there’s even an oddly moving confession about the tyranny of youth and the grim acceptance of age.

The two fashion dummies have been jolted out of suspended animation for a semi-worthwhile wheeze. It’s short at an economical hour-and-a-half but in the end, this is more prefab than ab fab.