After a few middle of the road episodes, No One will make you wish there was more than two left in the season, writes Sinead Brennan.

Much of the season so far has been a slow build up to what will hopefully be an explosive finale (or explosive episode 9 at least, as is always the way) and this episode leaves us almost tasting the action and drama to come next week.

There were a few "oh my God" moments and a couple of "finally's" thrown in too.

First up though, that ending.

"A girl is Arya Stark of Wintefell, and I am going home"

Finally Arya is to leave Braavos. After too many episodes in the free city with some slow and (nearly) boring scenes that were only watchable because of the level of intrigue, her time there is complete and she is on her way West. 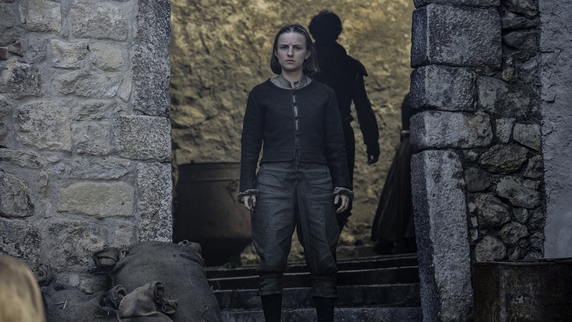 After an exciting Terminator-esque chase scene with the Waif, Arya lures her into her room where her trusty Needle lies in wait. Bleeding profusely, Arya is the underdog in this fight, but in a stroke of genius she cuts the candlelight and fights in the dark, blind, giving her the upper hand.

Westeros-bound, we can only hope she'll cross paths with Sansa and Jon, or a friendly face of some sort. With her new skills and her killer attitude, Arya is someone you want on your side, and is sure to be a fearsome foe. Maybe she'll work her assassin skills on Ramsay? We can definitely expect a few more names to be crossed off her list.

Another big moment came just at the end. After some awkwardly hilarious wine and joke time with Tyrion, Missandei and Greyworm, the masters sailed into Meereen and set the city alight. 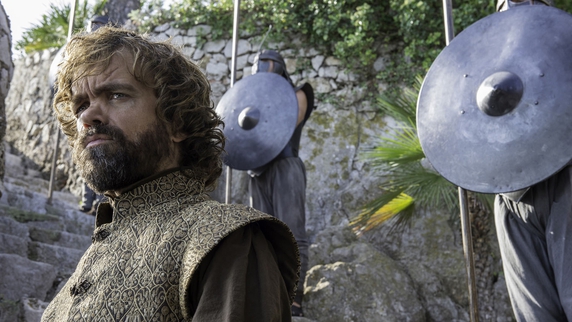 Side note: I hope Tyrion gets his vineyard some day.

Just as it seemed like their pyramid fortress was about to be compromised, who walks through the door only Daenerys Targaryen. Her appearance was short lived but I can only imagine she'll have more screen time next week.

Finally it's looking like Meereen will have to be abandoned, which is great news. As long as all our favourite characters make it out alive, hopefully on dragonback because how cool would that be, I'll be so glad to see the back of the place.

Tyrion and Varys are one of the best bromances on the show and the scene in which they leave each other was just lovely. 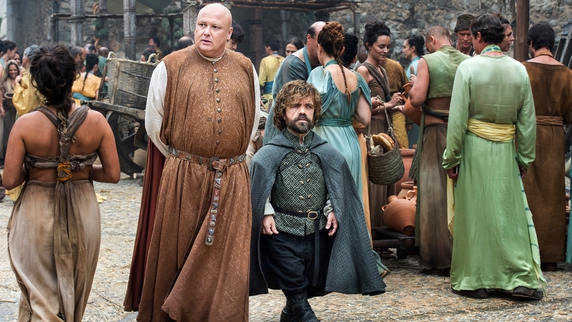 The all-knowing Varys did drop an air of foreboding into his goodbye, telling Tyrion how sceptical he was that his plan had actually worked. He's off to secure some ships, will he meet with Euron or Yara, or someone completely different?

In a long-awaited reunion, Jaime and Brienne came face to face.

Two friends on opposing sides of a fight, I wondered if they would both make it out alive, but I always kind of knew there wasn't going to be a big battle at Riverrun - the big battle will be for Winterfell. After freeing Lord Edmure on the condition that he surrender, Jaime orchestrates a peaceful takeover.

The scene with Brienne and Jaime was bittersweet, as was their distant wave goodbye.

When Brienne tried to give him back his sword - his Valyrian steel sword - he says it will always be her's. CUTE. To be fair, she needs it more up North with the impending White Walker threat. 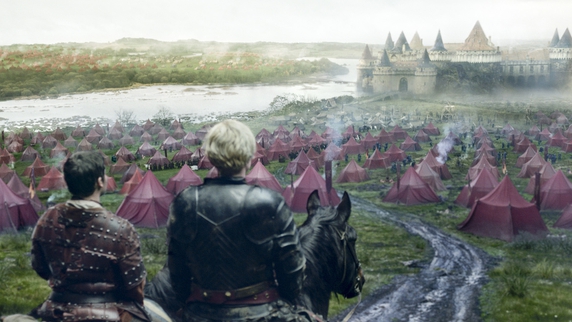 What was brilliant though was Bronn and Pod's reunion. It's so great to have Bronn back on the show. No other character quite calls it like Bronn.

We've all wondered about the sexual tension between Jaime and Brienne and he doesn't mince his words in telling Pod that there's definitely something between them. Cersei may be his driving force, bringing out his darker, more brutal and ruthless side, but Brienne brings out the Jaime we all grew to love.

Down in King's Landing, Cersei is in big trouble. 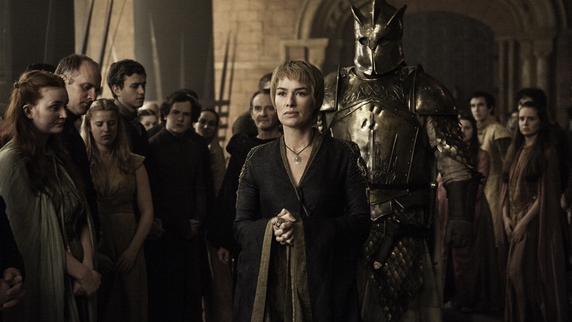 As the Faith Militant visit her in the Red Keep we finally get to see The Mountain in action against them in what was a gorey, but beautifully shot sequence.

Later in the episode King Tommen makes an announcement that the idea of a trial by combat is now deemed inhumane, so all of Cersei and Qyburn's work has been for nothing. The Frankenstein Mountain won't be able to be her champion and a judging panel of seven septons will decide her punishment. I don't fancy her chances, but or course, this is Cersei Lannister and she always has something up her sleeve. What exactly is this rumour that she had Qyburn investigate?

And last but not least, the Hound is on a killing spree and he hasn't lost his touch.

On his travels to hunt down the three members of the Brotherhood Without Banners that slaughtered his new friends, he comes across a familiar face. Beric Dondarrion. The man that first told us dead doesn't mean dead and that it's impossible to come back to life.

Beric tells the Hound of the cold winds in the North and that they must all join forces to fight against the real threat. As another follower of the Lord of Light (who isn't at this stage?), Beric will no doubt love Jon Snow and fight alongside him should they meet and well, they kind of have to.

This, for me, was the best episode since The Door. The pace was quick and sharp, each storyline moved forward exponentially and it left me wanting more.

Next week's Battle of the Bastards can't come quick enough.