Game of Thrones has finally returned to our screens and the stage has been set for what may just be the most eventful season yet. TEN's Sinead Brennan stayed up to watch.

Spoiler alert for anyone who has not yet seen season six, episode one!

The episode picked up exactly where it left off in the season five finale - looking at Jon Snow's dead body lying on the cold hard ground of Castle Black. While I hoped that we would get answers with regard to his fate in the first episode, I always knew that was wishful thinking and a storyline like this would never be resolved in the opening 60 minutes, purely because any method of bringing someone back from the dead is sure to take a bit of time and planning. After almost a year of waiting, what's another couple of weeks?

As suspected, Ser Davos, Ghost and a number of loyal members of the Nights Watch are guarding Jon's body from Alliser Thorne and the brothers that lost faith in his vision. Thorne - who freely admitted to the entire Watch that he killed Jon, labelling him a traitor and someone that was leading them down the path to destruction - is now in charge and frankly, that's a scary prospect. 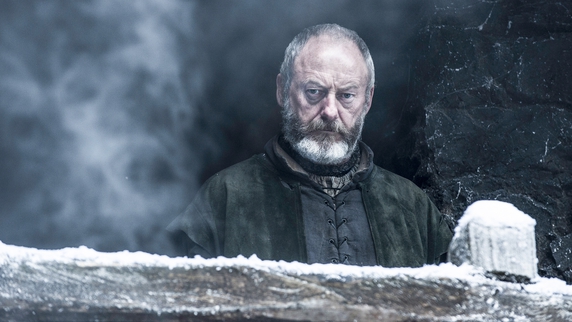 As Davos and co. lock themselves in a room they realise that they can't do it alone, and upon Davos' instructions, one sets off to bring back someone that owes their life to Jon. He's saved a lot of people but this can only mean bringing the Wildling army back to The Wall because they have the man-power to make a difference.

It is in the last moments of the episode that Davos suggests Melisandre may be able to help Jon, telling the others, "You haven't seen her do what I've seen her do." This feels like the bingo moment but we discover something about the Red Woman that may or may not have some impact. As she undresses completely, she transforms into an old woman. This throws up so many questions. Does she do this every night before bed? If she does, how was it never discovered on her travels with Stannis and his army? If not, does this mean that since Stannis' death, and now Jon's, that she's losing some of her faith in the Lord of Light? Does this ability give her eternal life? 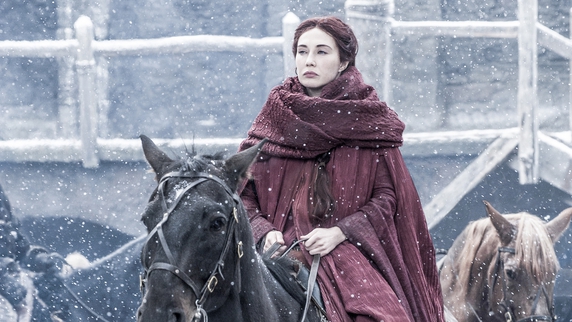 Does Melisandre hold the key?

As with all of the other opening episodes, we caught up with all of the main players for a couple of minutes to see where they're at and to set up their storylines for the coming episodes. While there is still a lot of distance between many of them, things seem more linked than ever before.

When we catch up with Sansa and Theon they are running through the snow in a bid to put as much distance between them and the Boltons as possible. It appears winter has well and truly come.

Now more Theon than Reek, he is all about putting Sansa first and when they are eventually tracked down, he tries to sacrifice himself for her. Luckily though, the Bolton soldiers weren't the only ones hot on their trail, with Brienne and Pod coming to their rescue in the first bit of action we see this season. 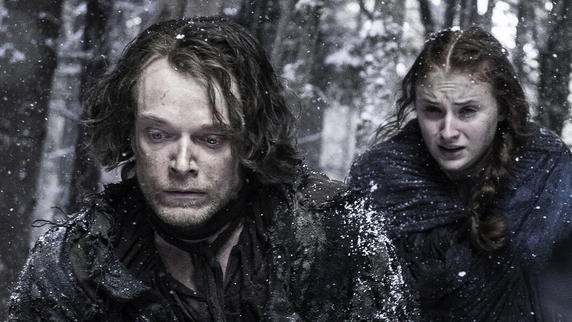 On the run - Theon and Sansa

Before Brienne arrived on the scene, Theon told Sansa to go North to Jon at Castle Black as he could protect her. Will they decide this is their safest option? There are limited places Sansa can actually go. How great would it be for Sansa to be reunited with her big brother just as he is resurrected from the dead... Wishful thinking?

Meanwhile, back at Winterfell, Ramsay shows some genuine emotion - who knew? - as he visits the dead body of his former lover. And his day gets deservedly worse. During a chat with his dad, Ramsay is scolded for letting Sansa slip away because they can never really have The North without her and her Stark name. 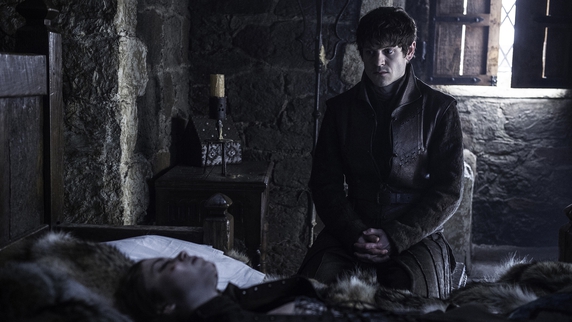 Roose also points out that if Ramsay doesn't find his wife, he cannot have an heir, and without an heir there's essentially no point in him taking the Bolton name as they planned last season - Ramsay Snow he'll remain. Throwing extra shade, Roose remarks that his wife better give birth to a boy so there will be a Bolton heir. But I'm pretty sure no baby they would have would actually be safe from Ramsay, especially if it's going to have everything he ever wanted.

Next, we took a trip to King's Landing where it was impossible not to pity Cersei as she rushed with excitement to greet her daughter Myrcella, only to discover that she has been killed. She has done some terrible things, but one thing Cersei always loved was her children and in a darkly hilarious line she described her daughter by saying, "She was good. I don't know where she came from." One thing you can admire about Cersei, she's self aware. 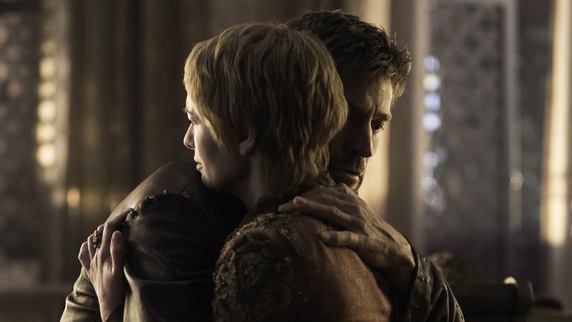 Opening up to Jaime about the prophecy she received as a child - that all of her children would die before she does - Cersei was more subdued than usual, heralding a change from their usual dynamic. It is Jaime now that pushes them to reach for power, regain all that they have lost and "take it all".

In Dorne, it turns out poisoning Myrcella was only one part of Ellaria and the Sand Snakes' plot. In a scene that appears friendly at face value, Prince Doran Martell, brother to Oberyn and Elia, talks to Ellaria about Oberyn, fondly remembering his zest for life. As soon as he takes his throne, however, having just received word that Myrcella was killed, Ellaria stabs him for being weak and not avenging the deaths of his siblings. They then find Doran's son Trystane to kill too, because "a weak man will never rule Dorne again". With someone so volatile now in power, we've a feeling Dorne won't remain peaceful for long. 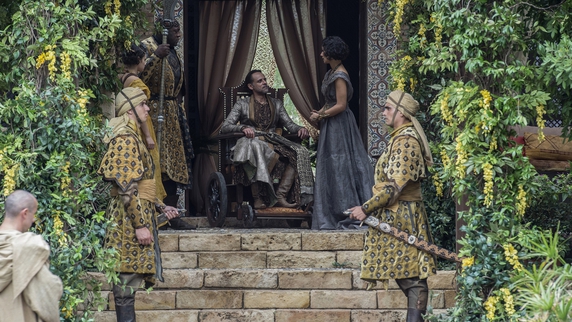 What's going to go down in Dorne?

Having seen nothing of Margaery since her incarceration, we get a quick glimpse of the Queen, still locked up and being asked to "confess" to her sins by the evil nun that rang the bell and shouted "shame" at Cersei during her walk of atonement. The High Sparrow then takes over, telling Margaery that King Tommen misses her and that she should confess in order to be with him again. Adamant that she has nothing to confess to, the Sparrow tells her that she has "miles to go" so she might not be getting out any time soon. I know Tommen is young and he never really had a 'Good King' role model to learn from, but he really should man up and get his wife out of prison. Like, you're King, do something!

In Meereen, we enjoy some quality dialogue between Tyrion and Varys as they discuss their plans going forward. Knowing that the Sons of the Harpy are a force to be reckoned with - they've even burned the harbour so there'll be no return sail to Westeros any time soon - they set about finding out who their leader is. Varys' little birds are sure to find out something soon. 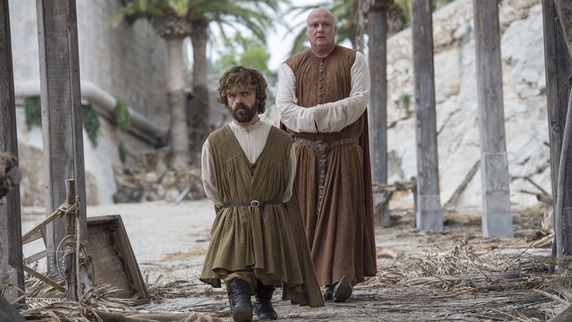 From Meereen to Daenerys' trail, we then catch up with Daario and Jorah who are on the hunt for their Queen. Jorah, the man who lives in the friend zone but cannot stay away; and Daario, the man who's actually with Dany, talk about their love of her. Jorah admits that his feelings for her are frustrating - duh! Possibly more frustrating is his spreading Greyscale. Jorah may not last to see the world after she has conquered it.

When they come into a clearing and see all of the hoof marks, and come across Dany's ring that she left for them to find, they continue on their mission, realising that she is likely with Dothraki horsemen. 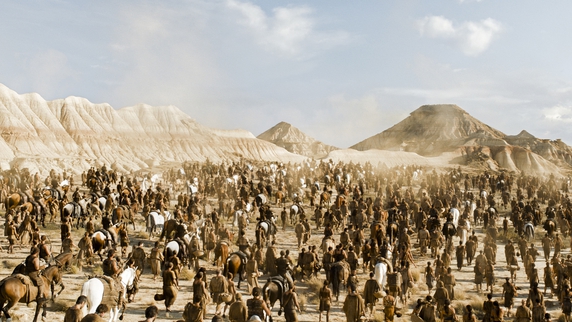 Shoot to Dany, bound and whipped as she walks alongside the Dothraki, listening unbeknownst to their conversations about her - they discuss her white hair, stupidity and intentions to sleep with her.

When they eventually bring her to the Khal, who laments her beauty and his intentions to impregnate her, she bites back in Dothraki that she will lie with no man and bear no children for any one. She then reveals her marriage to the late Khal Drogo which immediately changes their attitude towards her. Removing her bonds, the Khal assures her that no man will lie with her and that she will be taken to Vaes Dothrak to reside with all of the other Khaleesi widows. We've a feeling this won't be the route she takes but until Daario and Jorah catch up with them, she might just have to go along with it. I wouldn't be surprised if she somehow manages to get this khalasar to join her army - she's a persuasive one! 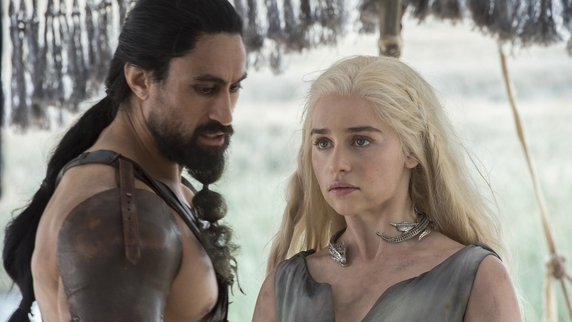 Dany is nothing if not persuasive...

The last major player we catch up with is the newly blind Arya who is seen begging on the streets of Braavos, before being visited by that awful girl from the House of Black and White who throws her a stick and tells her to fight. Arya, who is at an obvious disadvantage due to her lack of sight, is essentially beaten by the girl and told she will return tomorrow. Is this all part of her training? What exactly is going to happen to her now? Will she get her sight back? 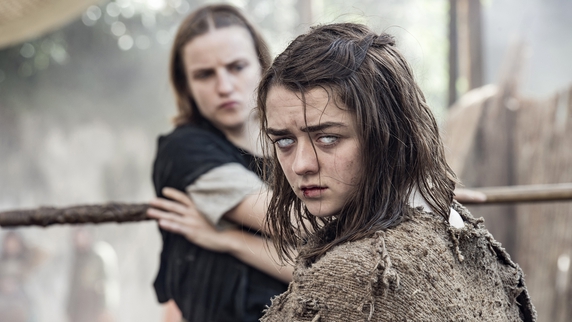 Will Arya get her sight back?

It's been a season since we saw Bran, and hopefully we'll catch up with him next week because he was nowhere to be seen.

The episode sets up the season nicely, with everyone on a very specific path. With very little action, it really was just a 'welcome back' establisher. But there's nothing wrong with that.