Adele was the big success story at the 2016 Brit Awards, picking up a whopping four gongs.

She took home the awards for Best Album, Best Female Solo Artist, Best Single and the Global Success Award. The superstar also took to the stage for a rousing rendition of her track When We Were Young to close the event.

It was the second time Adele has won the Best British Female Artist award. After making a brief speech thanking her fans and her management, the singer also took the opportunity to voice her support for Kesha. 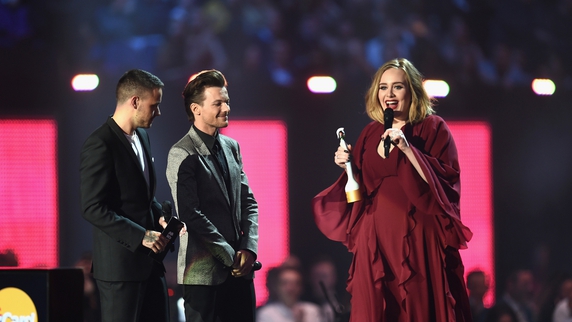 The hotly contested Best British Single gong went to Adele for her hit comeback single Hello. She said the second win absolutely blew her mind, and joked that although she's been loving the performances, she thought Justin Bieber was going to set the place on fire with his pyrotechnic-filled stage antics.

The London-born singer became hugely emotional when taking to the stage to pick up her third statue of the night, the Global Success Award, saying she had gotten "really lost for a while" and how much it meant to her to be accepted by her fans. 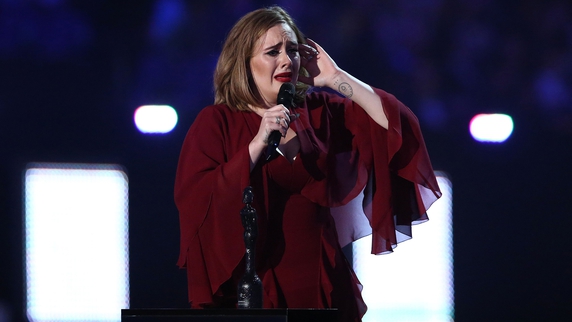 When picking up her fourth award for British Album of the Year for her best-selling record 25, she demonstrated her trademark humour by apologising for her "ugly cry face" from earlier, and emotionally thanked her boyfriend and their son, saying "this is all for you peanut".

Adele won more awards at #Brits2016 than she could carry! https://t.co/vga186byq5https://t.co/TdhpnuCgbF

A host of stars graced the red carpet for the ceremony at the O2 Arena in London, including pop icons Rihanna, Kylie Minogue as well as One Direction members Louis Tomlinson and Liam Payne.

Take a look at our gallery of the event here.

After a brief intro from hosts Ant & Dec, Coldplay opened the proceedings with a live performance featuring lots of confetti and a fresh flower-encrusted piano. 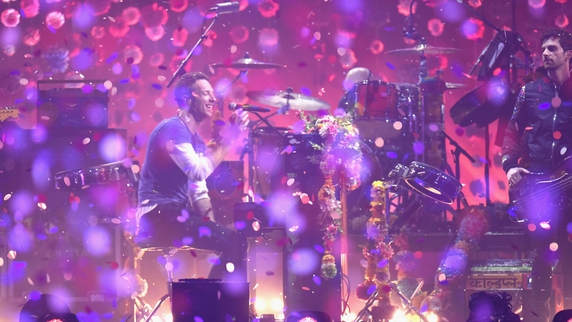 Coldplay perform at the Brits

Justin Bieber treated the crowd to a pared-back version of his hit single Love Yourself, accompanied just by an James Bay on guitar, before breaking into a more dramatic rendition of Sorry surrounded by backing dancers, a ring of fire and plenty of pyrotechnics. 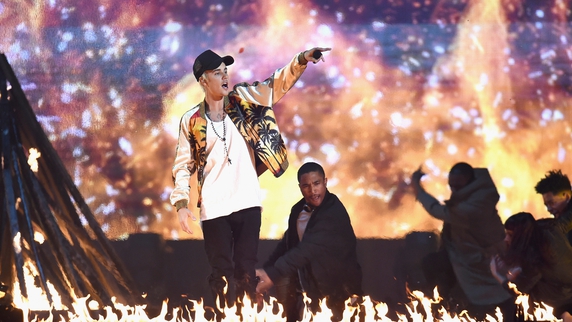 Justin Bieber on stage at the Brits 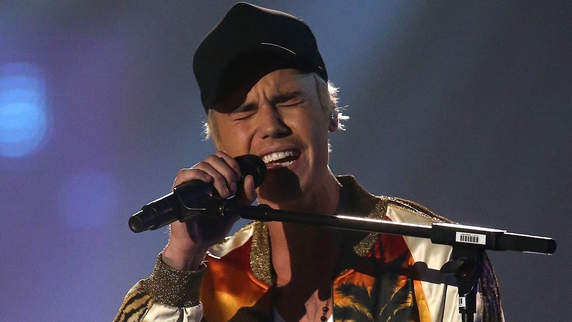 Kylie Minogue presented the Best British Male Solo Artist award to James Bay, who thanked his family for being with him at the awards, saying "this is insane".

The Best British Band gong was presented by Star Trek and Mission Impossible star Simon Pegg to Coldplay. This is the fourth time they've won the award, having first picked it up a whopping fifteen years ago in 2001.

Rihanna rocked the stage in a fantastic pair of fringed trousers, with a sneaky surprise cameo from rapper Drake, performing her new single Work. 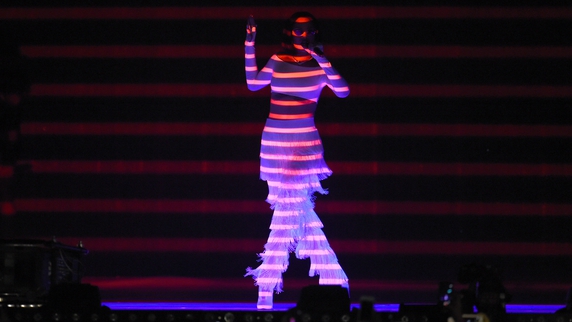 Nick Grimshaw and Cheryl presented the British Breakthrough Act to Catfish and The Bottleman who beat out competition from James Bay, Jess Glynne, Wolf Alice and Years & Years. International Female went to Bjork, who was unable to attend the ceremony to pick up her award, but accepted it via a video message, in which she said she was "honoured" to have the title.

The awards show featured a special tribute to David Bowie, who passed away in January. He won the Brit award for Best British Male twice - in 1984 and 2014 - and received the Outstanding Contribution to British Music award in 1996. 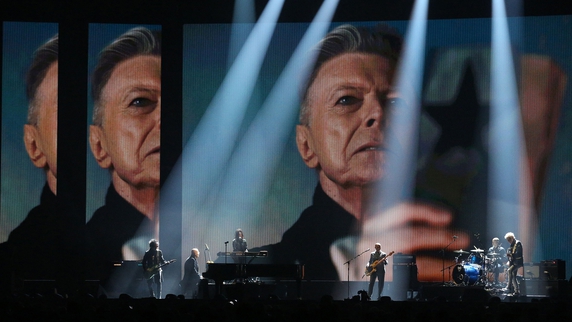 The tribute began with a live musical medley of some of Bowie's best-known tracks including Space Oddity, Let's Dance, Under Pressure and Ashes to Ashes, played alongside a video montage of the star at work.

Lorde, who Bowie once hailed as the future of music, then took to the stage for a pared-back and moving rendition of Life on Mars.

Annie Lennox paid tribute to the late music icon, with Bowie's close friend Gary Oldman accepting the Icon Award on his behalf, saying "the world lost an artist of transcendent talent" adding that "David's contribution, his influence on popular music and culture itself has no equal".

Oldman said that Bowie was the "living embodiment of that singular word 'icon'", and said he was "so deeply touched and honoured to be here tonight to accept this award for David and his family." 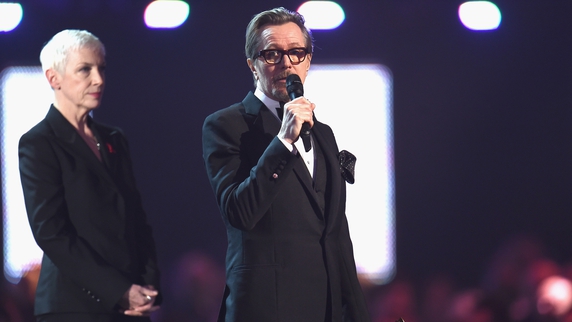 British Artist Video of the Year went to One Direction for Drag Me Down. Although the band are currently on a much-publicised hiatus, Louis Tomlinson and Liam Payne took to the stage to accept the gong. 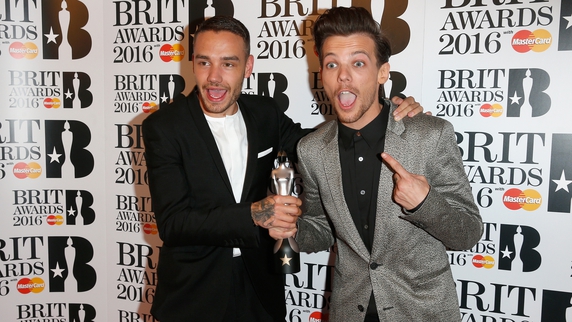 Liam and Louis delighted with their Brits win

British Album of the Year
Adele: 25 - WINNER
Coldplay: A Head Full Of Dreams
Florence + The Machine: How Big, How Blue, How Beautiful
James Bay: Chaos And The Calm
Jamie xx: In Colour

British Artist Video of the Year
Adele: Hello
Calvin Harris and Disciples: How Deep Is Your Love
Ed Sheeran: Photograph
Ellie Goulding: Love Me Like You Do
Jessie J: Flashlight
Little Mix: Black Magic
Naughty Boy featuring Beyonce and Arrow Benjamin: Runnin (Lose It All)
One Direction: Drag Me Down - WINNER
Sam Smith: Writing's On The Wall
Years & Years: King 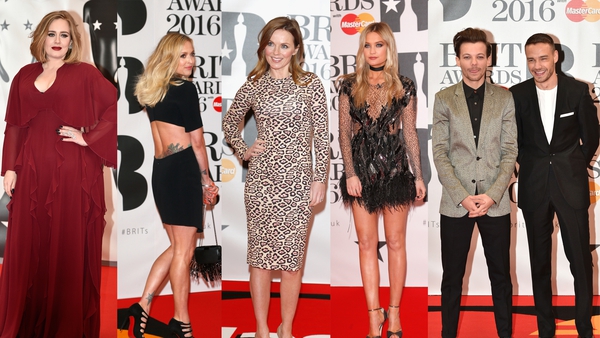