Carol star Blanchett was one of our top looks from the night in an elaborate floral cut-out Alexander McQueen dress with a feathered skirt. She complemented the edgy dress with a classic chignon hairstyle and diamond drop earrings. 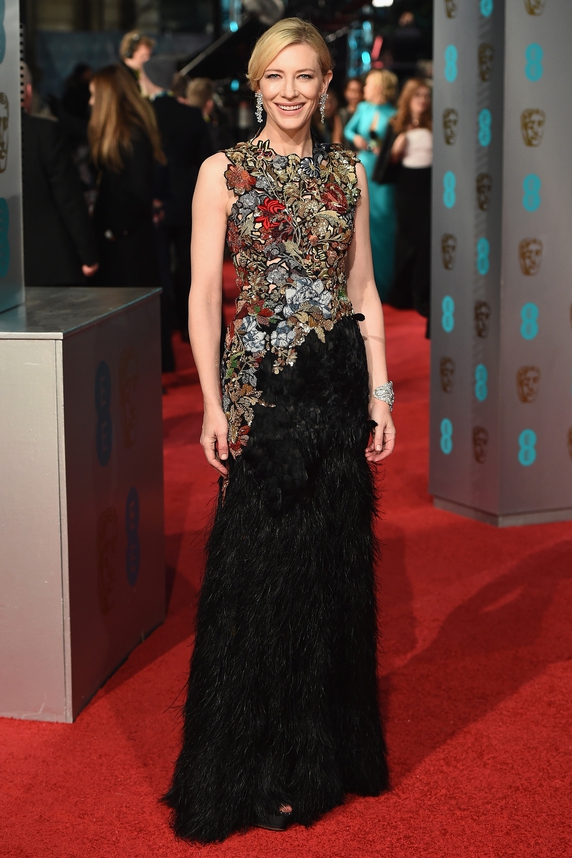 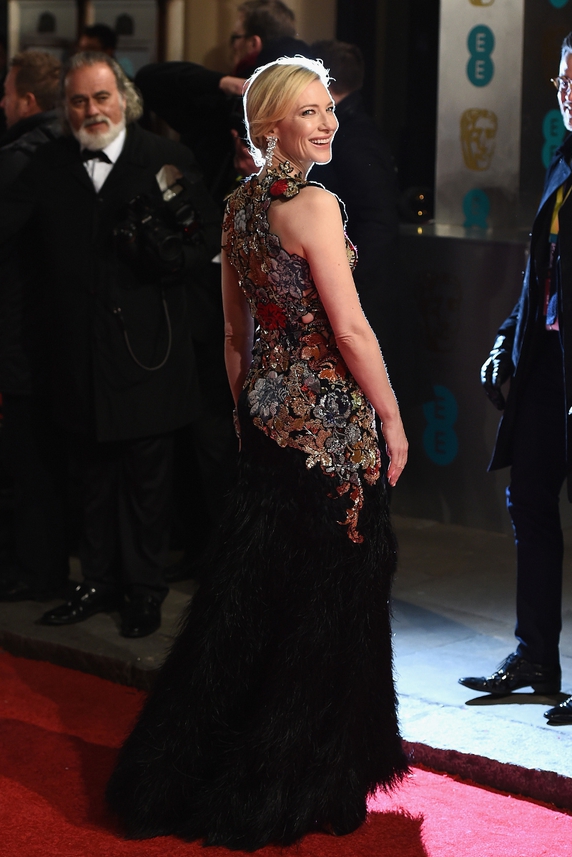 Saoirse Ronan has been ruling the red carpet recently, and the BAFTAs were no exception, with the Brooklyn star supporting British fashion in a strapless, heavily embellished Burberry column gown, which she accessorised with a gemstone three-tier necklace. The vaguely Grecian vibes of the dress were complemented with thick cat-eye liner and a dishevelled ponytail. 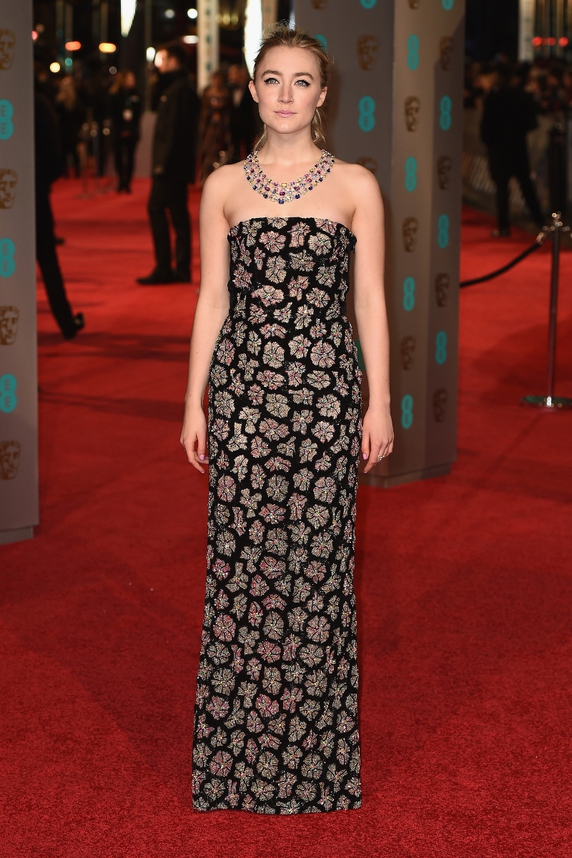 The Danish Girl's Alicia Vikander injected a bit of rock chick-chic into the proceedings in a Louis Vuitton leather dress which was studded all over with dangerous-looking silver spikes. The actress, who is dating Michael Fassbender, told showbiz channel E! on the red carpet that the fashion-forward gown weighed a whopping 35lbs. 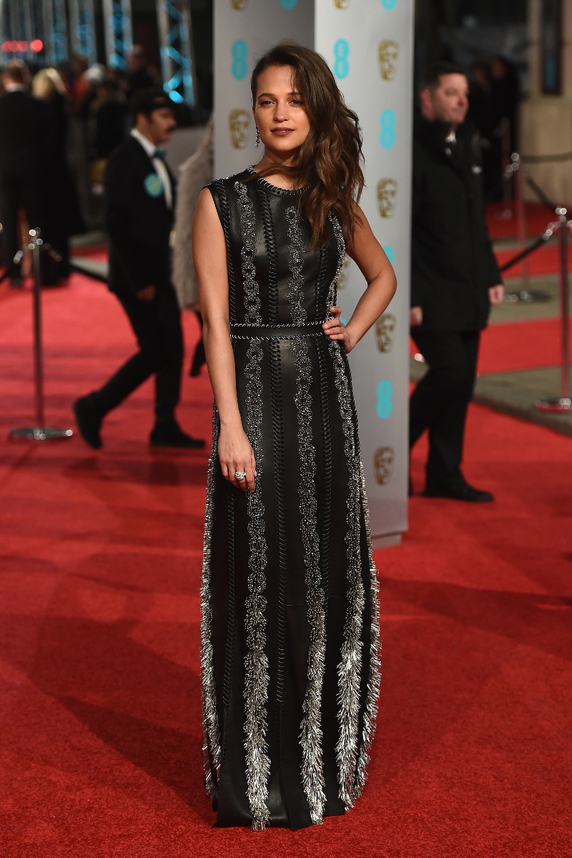 Kate Winslet was a vision on the red carpet in a figure-hugging black Antonio Beradi gown which had a dramatic fishtail skirt and jagged neckline. She kept her hair and makeup simple but glam, with lightly tousled waves and a classic pillarbox red lip. 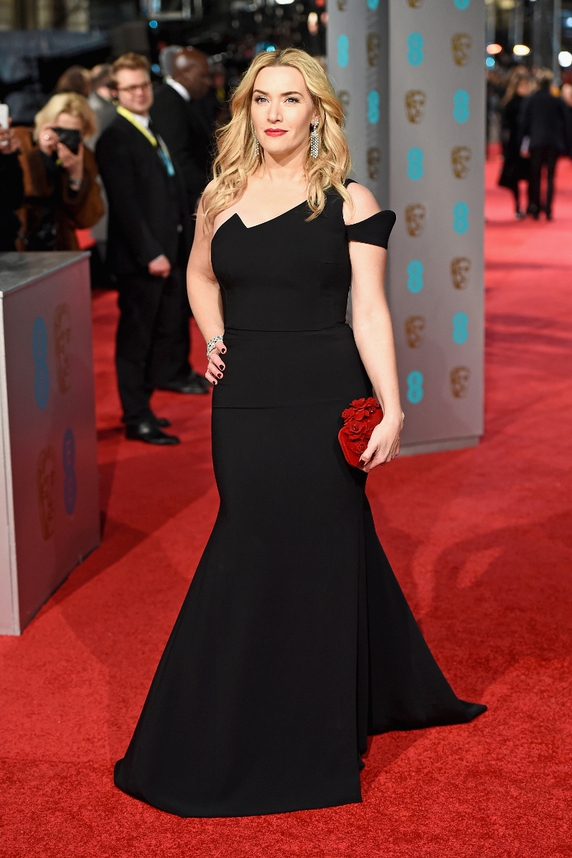 Poldark star Heida Reed made waves in a seriously plunging shimmering gown from Nicholas Oakwell which she cinched in at the waist with a thick leather belt. A deep burgundy lipstick and simple middle-parted hairstyle lent the overall look an understated but classic style. 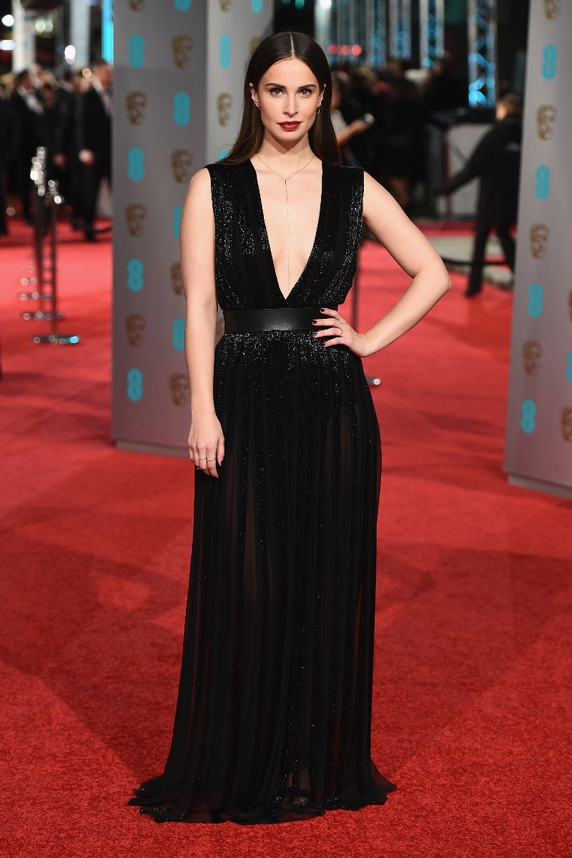 Actress Laura Haddock, who is married to The Hunger Games star Sam Claflin, went for a dramatic black dress with a voluminous feathered skirt, pairing the dress with black platform heels. 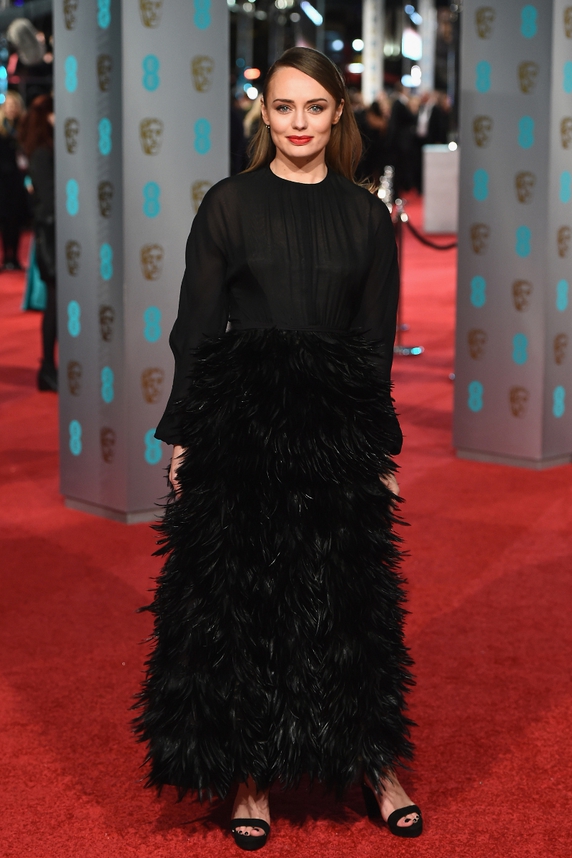 Australian actress Isla Fisher, pictured here with her husband Sacha Baron Cohen, was a welcome break from the sea of black gowns in a simple white strappy dress. She wore her famous red locks in cascading Hollywood waves and finished off the look with subtly contoured cheekbones and dark lipstick. 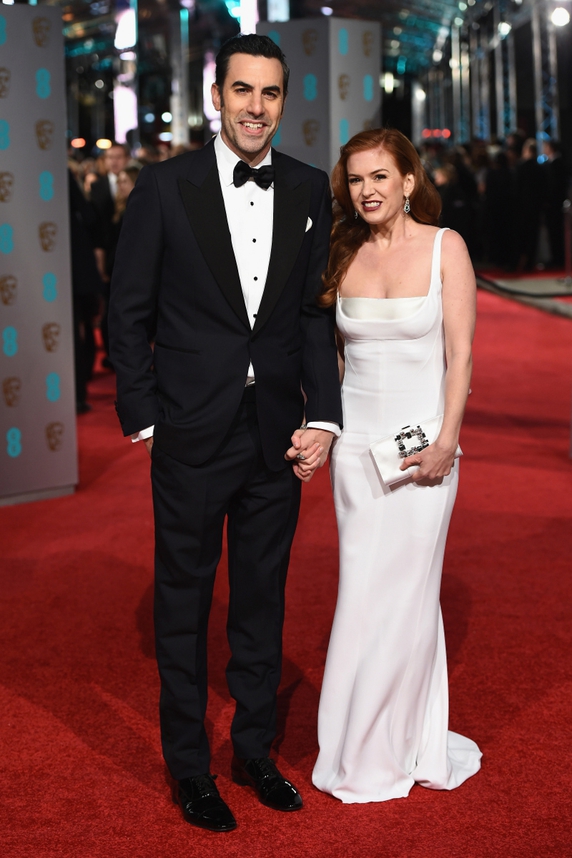 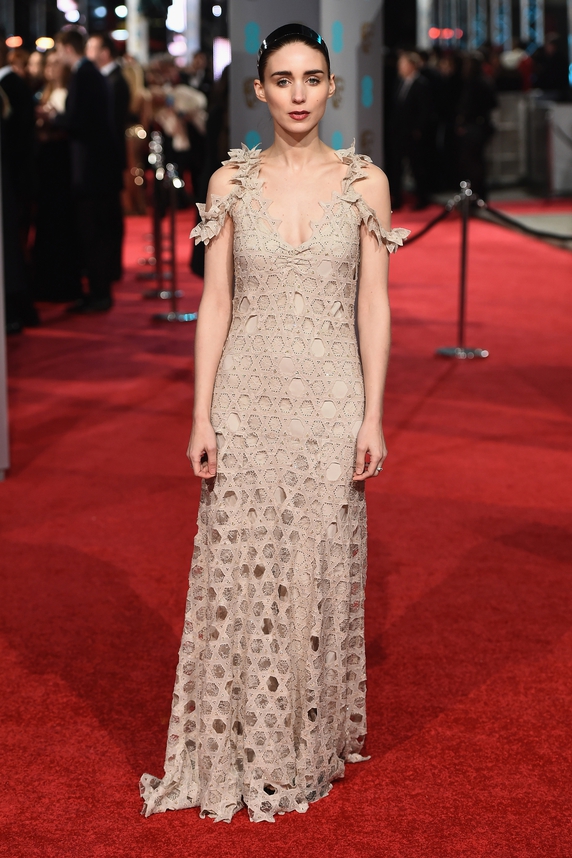 Julianne Moore was typically fabulous in a sleek white and black fishtail gown which was custom-made by Armani. Chopard jewels and a bright pink lipstick provided the perfect finishing touches. 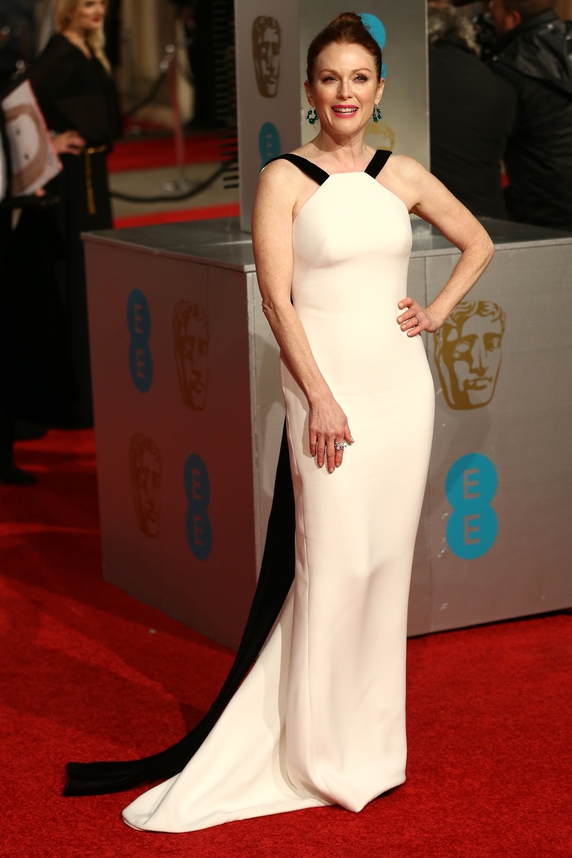 Red was also a popular choice on the evening, with Fifty Shades of Grey star Dakota Johnson donning a spaghetti strap scarlet gown with ruffles and a plunging neckline by Dior. 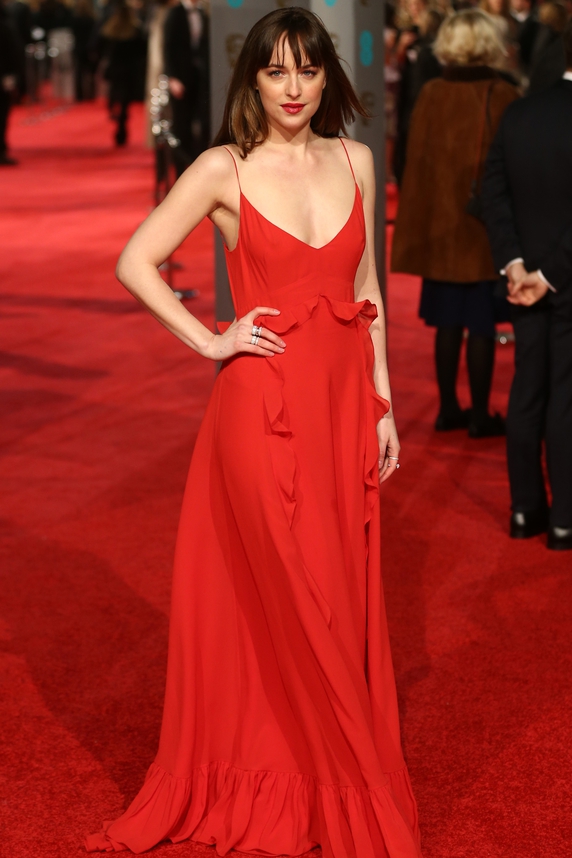 Game of Thrones' Emilia Clarke wowed in a similarly-hued frock which featured a low-V neck and cut-out detailing at the shoulders. 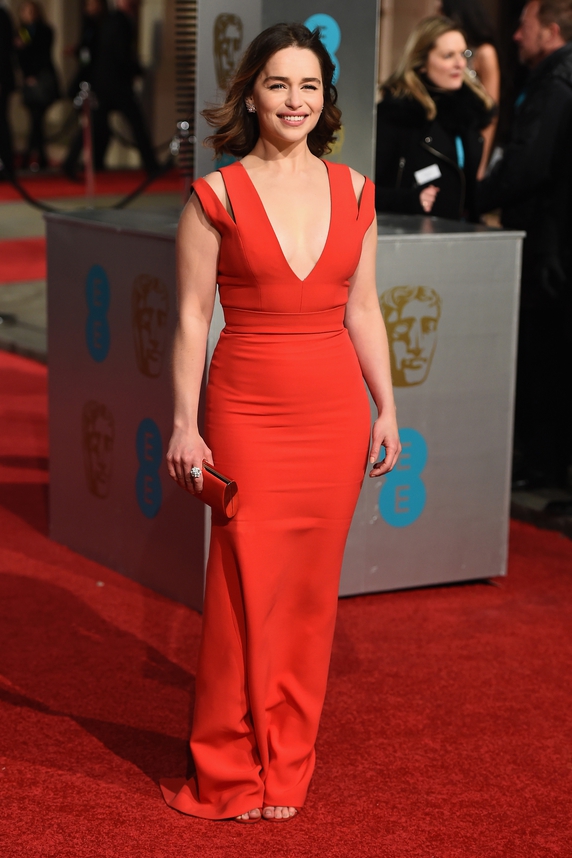 Hannah Bagshawe, Eddie Redmayne's wife, also opted for a red frock, this time with a gorgeous full-skirt and train. 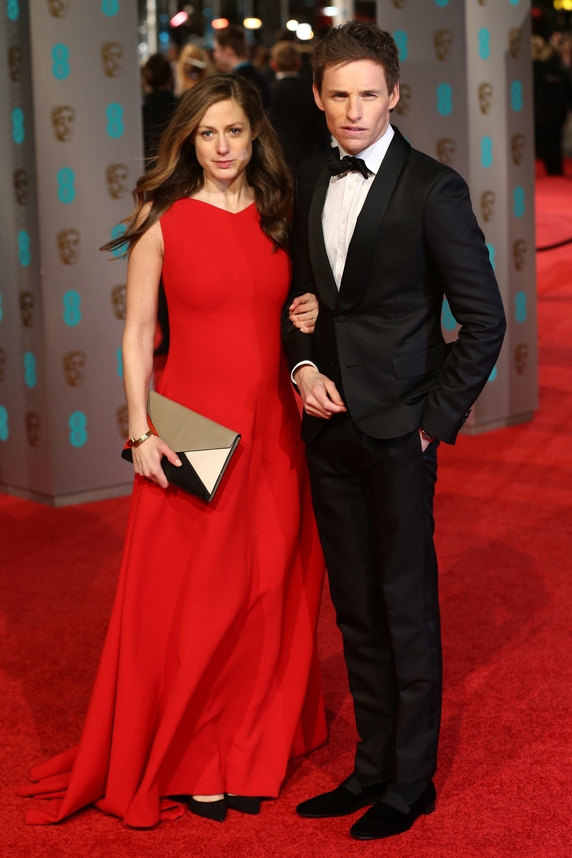 Bray-born presenter Laura Whitmore provided a refreshing pop of colour in a teal long-sleeve column gown, which had a dramatic cut-out at the bust and exaggerated shoulders. 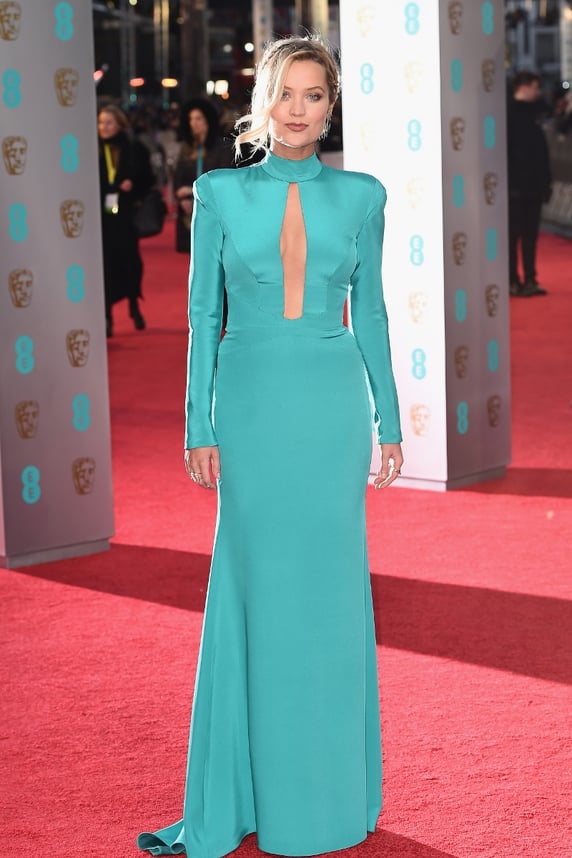