They haven't been seen in the same room for eight years, but last night all four members of ABBA were photographed on stage in Stockholm together. But sadly, there was no singing.

The group, made up of Agnetha Fältskog, Björn Ulvaeus, Benny Andersson, and Anni-Frid Lyngstad, once turned down the offer of $1billion to reunite, but all it took was a new entertainment venture, Mamma Mia! The Party, to bring them back together.

When asked by reporters at the opening of the restaurant about the chances of getting the band back together, Andersson insisted that it wasn't on the cards.

Ulvaeus added: "We are here to party!"

Tellingly the foursome arrived and left the event separately, which was held at the brand new Tyrol restaurant in Stockholm, which is based on the Greek tavern in the Mamma Mia! musical. 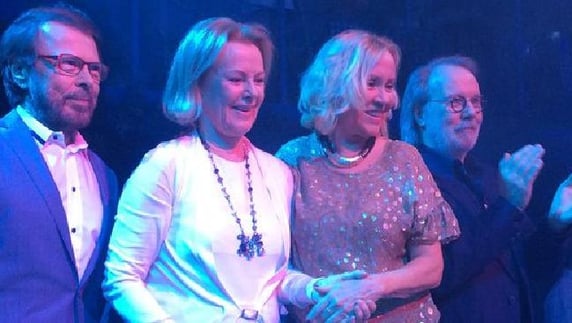 Inside the venue the quartet did pose side by side for a brief 20 seconds, long enough for fans and guests to snap a rare picture of the Swedish pop legends 'reunited' on stage together.

The four ABBA members had not appeared together since 2008 when they walked down red carpets in London and Stockholm for the film premieres of Mamma Mia!, but they were not pictured together.

They have not been been seen on a stage or singing together since ABBA's heyday more than 30 years ago.

ABBA has sold more than 380 million albums worldwide since the band's breakthrough at the 1974 Eurovision Song Contest.

Mamma Mia! the album was released in 1975, appeared on ABBA's third, self-titled album, and became one of ABBA's many timeless hits.

#ABBAReunion...but sadly there was no singing! https://t.co/zhgVCUtMwo Would you like to see ABBA tour again?

Following their appearance together on stage, Twitter erupted with fan photos of the momentous occasion.

Here's another #Abba reunion snap sent by a fan. Band didn't sing but did go on stage together! #MammaMiaTheParty pic.twitter.com/Lk594aGArv