Miley Cyrus has set social media alight after posting pictures to her Instagram account flaunting a diamond ring that looks suspiciously like the engagement ring Liam Hemsworth gave her in 2012. The couple ended their relationship in 2013.

After being photographed with her former beau and his family over the festive period, it looks like Miley Cyrus and Liam Hemsworth are making their reconnection a permanent affair.

Cyrus was spotted making her way through JFK Airport on Monday afternoon where she was seen flashing a massive diamond ring that is thought to be the same one that Liam proposed to her with.

She has since posted several pictures to her personal Instagram account which clearly shows the sparkler firmly in place on her left hand. Miley was also spotted moving her belongings back into Hemsworth's Malibu home.

23-year-old Cyrus first got together with 26-year-old Hemsworth in 2009 on the set of The Last Song, which they both starred in. At the time Cyrus stated that Hemsworth was her "first serious boyfriend".

After three years of having an on-again, off-again relationship, the couple announced their engagement in June 2012 but ended their relationship in September 2013.

Since they broke up, Cyrus' love life has remained under the spotlight with a number of high-profile relationships.

The Wrecking Ball singer dated Patrick Schwarzenegger until April 2014 and was then linked to Victoria's Secret model Stella Maxwell for a short time afterwards.

However, during those romances Miley never ruled out getting back with Hemsworth and in an interview with Barbara Walters revealed that their split occurred so that he could grow as an individual.

“I was so scared of ever being alone, and I think, conquering that fear, this year, was actually bigger than any other transition that I had, this entire year.

“I don’t ever want to have to need someone again, where you feel like, without them, you can’t be yourself.” 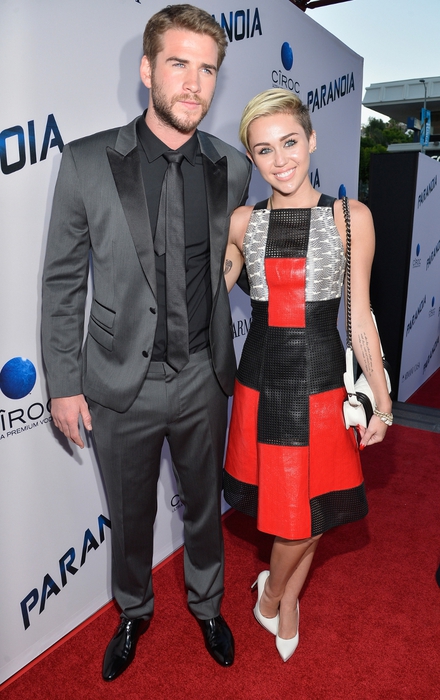