After last week's scene-setting opening episode, the second part of Rebellion was packed with action scenes as a divided Dublin dealt with the first stirrings of the Easter Rising. Read our review. Warning - spoiler alert!

The best line in the second episode of Rebellion came half way through when Frances, the near fanatical patriot who’s been touched by the hand of Pearse, encounters a bunch of looters ransacking the shops of Dublin as the Rising starts. “What are you doing with those shoes?” she demands of two young ones from the tenements. “They don’t even match!”

Earlier, a bunch of very polite Citizen Army men burst into British civil servant Charles Hammond and May’s bedroom in the Shelbourne and declared: “We’re going to hang the Starry Plough outside the front of this bastard William Martin Murphy’s imperial f***ing hotel.”

But laughs were few as the deadly serious business of overthrowing the British Empire finally got under way. Last week’s opening episode of Colin Teeven’s sumptuous five-parter was a scene setter in which we were introduced to the characters in this sprawling ensemble piece. Tonight they were isolated by their deeds as all hell broke loose across Dublin. 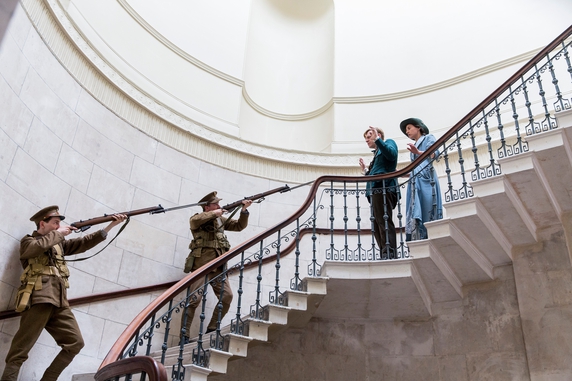 It started with the clank of a printing press churning out the Proclamation but Casement has been rumbled and the symbolism of striking on Easter Sunday has been lost. Things are about to change utterly but not till the following day. It all adds a fresh patina of grim determination to Ruth Bradley’s face. She is Rebellion’s fiery woman of action as she rushes about on her bone-shaker dispensing clichés and catch-alls. Her frightening fanaticism comes through when she says she is willing to shoot the citizenry if they get in the way of her vision for a new Republic. 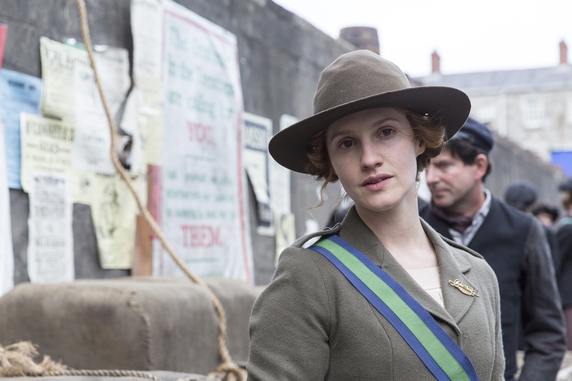 Frances may be the most outspoken character here but in many ways she is just a cipher. In the GPO she bridles at an order from Pearse (a magnetic Marcus Lamb) to go to the basement and asks him where such views would fit into a truly pluralistic Republic but Pearse, who at one point is transfixed by a crucifix as he leads the swearing of an oath, assures her that “we revere women more than men.” A reverence that the coming Free State didn’t share.

The female-lead cast continue to dominate proceedings. Sarah Greene is both fragile and doughty as May Lacey, the Castle secretary who is sleeping with the enemy and spying for the volunteers. We see her rolling in post-coital bliss with Hammond in the "b*****d William Martin Murphy’s imperial f***ing hotel" and dreaming about running away together to India. Meanwhile, Elizabeth Butler (the radiant Charlie Murphy) is checking her revolver on the morning of her marriage to Stephen Fallon Duffy, the officer in the British army who is holding out for Home Rule. 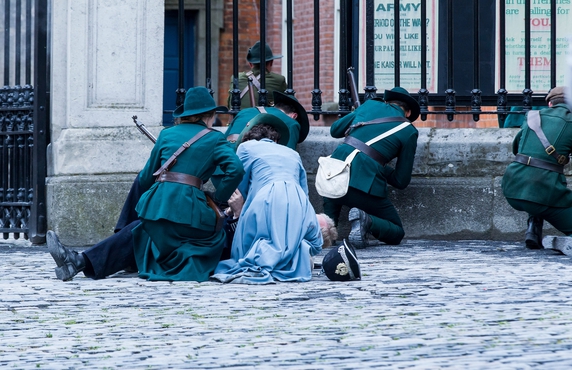 Scenes were filmed in the exact locations of historical events

In what has now become the new norm for bespoke Sunday night dramas, Dublin looks luminous and is bathed in the kind of beatific light that the messianic Pearse would surely have approved of. Of action there is plenty. The first shot fired hits an RIC constable standing his ground outside Dublin Castle (a scene filmed on the exact spot where it happened), Gatling guns rattle in the courtyard of Dublin Castle, and gunfire echoes across the city in most scenes.

Then there is the arrival of a waif from Belfast who may not know her way from the GPO to Trinity College but who may come to have an important role to play in coming episodes. She asks her soldier boyfriend (good to see Notes on a Scandal star Andrew Simpson making an appearance) what the rebels are fighting against. “The British Empire.” he says. “But we’re British.” she replies in bewilderment.

Elizabeth’s idiot champagne Charlie brother is also proving to be good value. He gets sozzled (again) after sis absconds to the GPO with working class rebel Jimmy (a very good Brian Gleeson): “Wedding’s off,” the hooray Henry says. “Seems like we’re having a rebellion instead.” 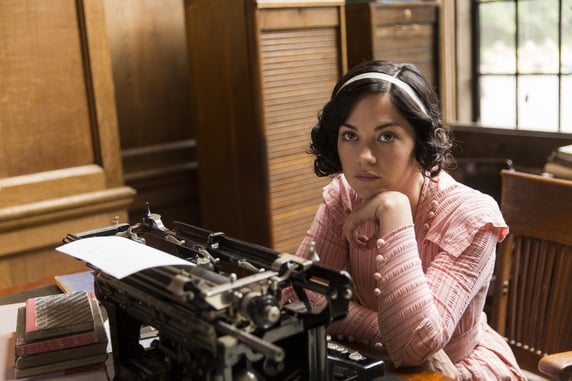 When Pearse reads the Proclamation outside the GPO, we don’t quite hear the old dears calling on the insurgents to go home to their mammies but in a telling scene we do hear one woman being held back by the RIC: “But I want to see the show.” she cries.

From the tenements of the city to the fine houses of Dalkey, history is being given a push. Rebellion is mixing love, hate, drama and death to become a very handsome-looking and very gripping story. What this second instalment did very well was impart the sense of confusion and fear mixed with patriotic zeal that fuelled Easter Monday 100 years ago. Elizabeth’s face betrays real terror and sorrow as she sees the bodies mount up and the bullets ricochet off the granite balustrades of City Hall.

It ends with prayers for the dying being murmured in the half light of the GPO and the tramp of British army boots on cobblestones. The empire is about to strike back. 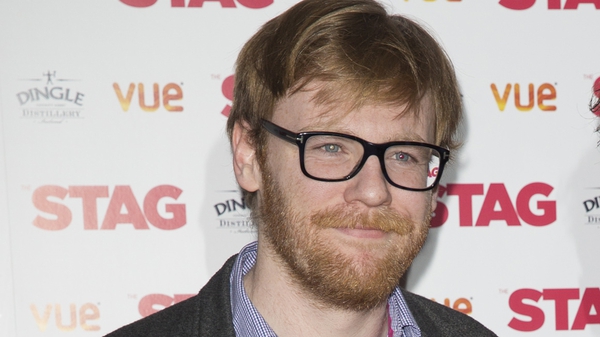