Northside - just across the river to the Southside...

Once and for all, the theory has been blown to pieces: size doesn't matter. U2 squeezed the iNNOCENCE + eXPERIENCE stage set-up into their old North Wall stomping ground and no thrills or memories were lost in the process. Their pride at being back in Dublin, mind, would have required a venue roughly the size of the island to properly house it.

As the band emerged onto the stage to the strains of Patti Smith's People Have the Power, the lumps in the throats of the faithful were in direct proportion to the amount of smartphones a blazing. And sure enough, difficulties in swallowing and battery anxiety were regular features for many over the next two-and-a-half hours as the moments kept on coming.

"Do you know what?" said Bono at the end of opener The Miracle (of Joey Ramone). "We have spent the last nine months travelling the world trying to explain what the Northside of Dublin is and we don't have to do that tonight because we're here!

"This is a great feeling for us to be home. Home."

Suddenly everything felt even cosier. 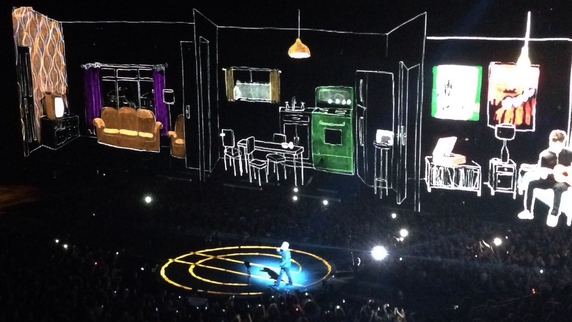 Now, perhaps because it's November, it did take a while for the people up in the seats to really warm up, but the punters below had no such inhibitions. The intimacy of the venue made the tracks from the Dublin-centric Songs of Innocence all the more special as Iris (Hold Me Close), Cedarwood Road, Song for Someone, Raised by Wolves and Every Breaking Wave ("I'm very blessed that my first love ended up my last love" said Bono by way of an introduction – just one of the many references to family throughout) took on new lives back where it all began. They also showed that their place in between the favourites from the previous three decades is more than justified.

And what favourites – the soundtracks to scenes in so many lives. Even Better Than the Real Thing lived up to its title; Bullet the Blue Sky was crushingly heavy and Mysterious Ways featured Josie from California being plucked from the crowd and showing off moves that suggested a nixer for the rest of the gigs may be in the offing. The triple whammy of Where the Streets Have No Name, Pride (in the Name of Love) and With or Without You would've been one awesome finale, but there was still a stunning City of Blinding Lights, a Paris-saluting Beautiful Day and the crowd-led One to come. 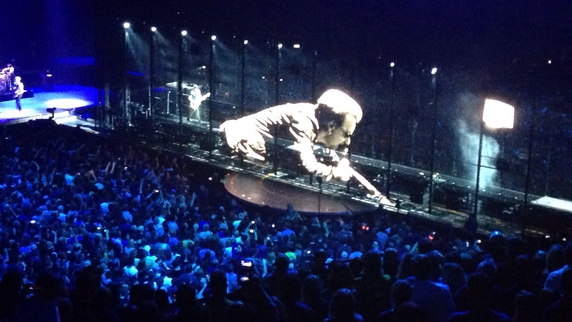 Yes, the visuals, lights and walkway were superb (and lost nothing in the move from bigger venues, according to those who had seen other shows on the tour), but, really, they could've done the whole set with the amps up on the beer crates from those bygone McGonagle's and Baggot Inn days and two 60-watts and the results would have been as special. The message brilliantly conveyed to fans, critics and young pretenders everywhere on Monday night was the one about not going quietly. After this masterclass Edge's priceless quote in the book U2 by U2, about how he still feels they are "four chancers from North Dublin", seemed in some strange way like the most heartfelt of compliments you could offer in return.

"Oíche mhaith," said Bono by way of a sign-off, and a man not famed for understatements had just delivered one of the biggest of his career. For those with tickets for Tuesday, Friday or Saturday, it looks like the best is yet to come.