U2 have announced they will return to Paris next month to play the two concerts which were postponed in the wake of the terrorist attacks on the city earlier this month.

The rescheduled shows will take place at the Accorhotels Arena in Bercy on December 6 and December 7.

U2 cancelled the gigs in the French capital after the terrorist attacks on the city on November 13 which left 130 dead and many more injured.

Speaking in Dublin today ahead of U2's first of four gigs at the 3Arena, Bono said, "So much that was taken from Paris on the tragic night of November 13th is irreplaceable.For one night, the killers took lives, took music, took peace of mind - but they couldn't steal the spirit of that city.

"It's a spirit our band knows well and will try to serve when we return for the postponed shows on December 6th and 7th. We’re going to put on our best for Paris."

Dozens of victims were held hostage and later killed at the Bataclan theatre, roughly three miles from the Bercy Arena where the U2 concert was due to take place on the two following nights. 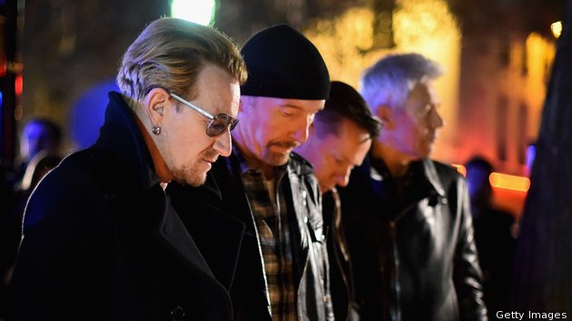 The day after the attacks, Bono, The Edge, Adam Clayton and Larry Mullen Jr placed a series of wreaths and floral tributes close to the scene of the Bataclan, where some 87 people lost their lives.

In an interview with 2fm's Dave Fanning, the band confirmed that they had to cancel their Paris but Bono insisted that the band would return to Paris as soon as possible.

He stated that those are behind the attacks "are not going to change us," and added that it was "up to the French authorities and the city of Paris" to determine when the rescheduled concerts would take place.

U2 tour promoter‎ and tour producer Arthur Fogel said today: "The band wanted us to reschedule as soon as possible so that they could honour the commitment to their audience."