Forget about Storm Barney - Storm Bono howled through Belfast last night. He also cajoled, pleaded, charmed and played the consummate frontman. U2's first Irish show of their iNNOCENCE + eXPERIENCE tour - and, amazingly, their first gig in Belfast since 1997 - was a triumph of pure rock theatre.

It was also the band's first gig since last week's horrors in Paris that saw U2 cancel their two dates in the city. The Bataclan massacre was a direct attack on freedom and it was also a direct attack on rock 'n' roll and U2, forever the peaceniks, came out fighting in Belfast with an opening salvo that reaffirmed their almost peerless live status. 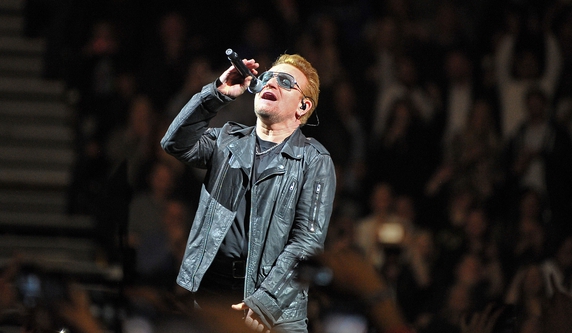 Under a bare light bulb suspended from high up in the SSE's rafters, The Miracle of Joey Ramone sounds big and raw in the live arena and followed by the exhilarating drama of Electric Co, it was the sound of a band immediately playing like their reputation depended on it. Followed by late-career wonder Vertigo, it was the start of a near two-and-a half-hour set that cherry picked from nearly the complete range of U2's 35-year back catalogue.

But the fast-beating heart of the iNNOCENCE + eXPERIENCE tour is very much in the present. The show revolves around an innovative stage design that serves the band and audience very well indeed. The multi-purpose big screen running down the centre of the walkway resembles an upside down toaster and it first becomes the centre of attention as haunting images of Bono's mother are beamed out for Iris (Hold Me Close) and the show's centrepiece - Cedarwood Road. 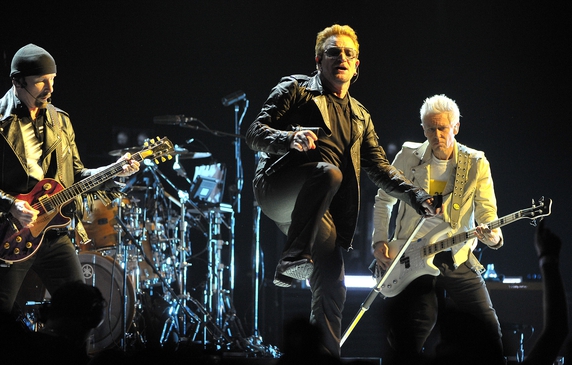 Here, the band take a journey into their suburban past, darkly. Bono takes a walk on the northside and that giant screen becomes a teenage diary of dreams and fears and also a pretty shameless act of self-mythology; just when you thought U2 couldn't get any bigger, Bono is superimposed onto a graphic rendering of the road he grew up on, cherry blossoms float in the wind, 18-hole Doc Martens stand on the street, and B&W footage of Bowie on TOTPs peeks between the houses. It is slightly cheesey but it also visually impressive.

Ever keen on reinvention, now U2 reinvent their own back catalogue. Sunday Bloody Sunday has been stripped down to bare bones as Larry Mullen leads the band down the runway, beating a lonely tattoo on a single drum. It's a mournful take on a U2 live staple, accompanied by visuals of murals on Derry's gable walls that represent both traditions. You may miss the visceral fury of the original but Sunday Bloody Sunday is now a call to honour the dead on both sides in what are, thankfully, changed times. 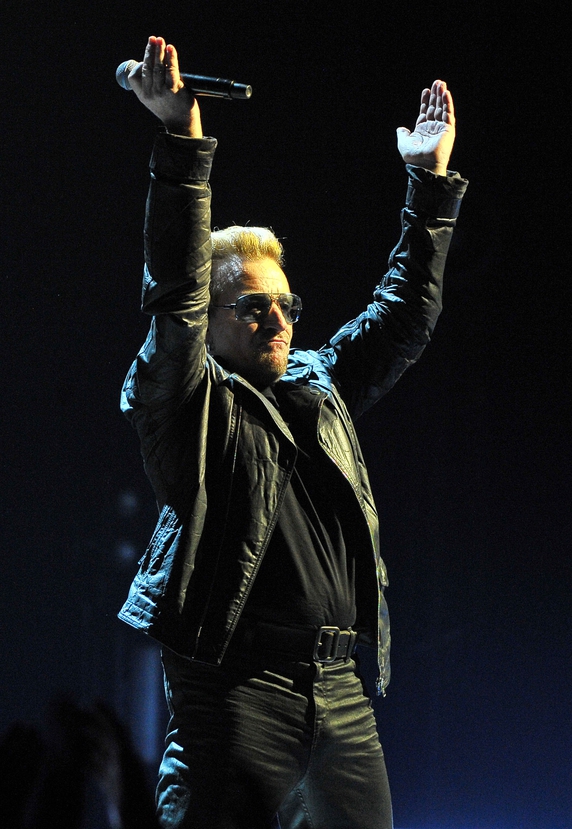 In contrast, Raised by Wolves, U2's song about the Dublin bombings of 1974, plays it straight, erupting from a cacophony of original news reports of the atrocity, it is by far the most effective of the new songs live. A smattering of Achtung Baby moments comes with a coruscating Until The End of The World and a radical reworking of The Fly, which thrums along on an industrial bass rumble and drum syncopation.

The band start the show in a tight attack formation playing like they're huddled onto the stage of a tiny club, giving it a bit of The Clash as they refire the passion that got them into a band in the first place but throughout the night they make full use of the set, running down the runway and at one point during a limber reading of Mysterious Ways inviting one audience member (one Teresa of Italy) on to the stage to take selfies and livestream the song on twitter. 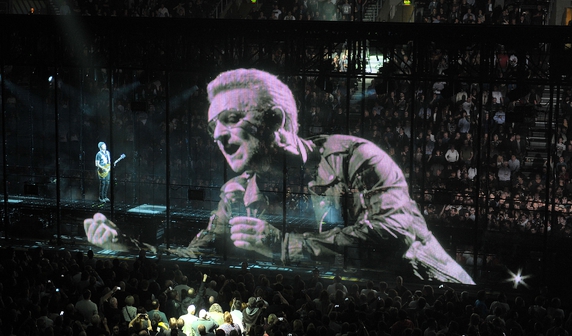 It's a typically U2 moment of universality. This most un-rock `n' roll band have never stopped trying to throw their arms around the world.

Perhaps the most moving and thrilling section of the night is the final set of songs. Bono sings a touching October on a bare stage to piano accompaniment from The Edge as a prelude to U2's "Power Set" of Bullet The Blue Sky, Streets, and Pride. Bullet blasts into life with aerial footage of the devastation wrought on the Syrian town of Kobanî. Bono changes the verse and turns the song into a rueful story of self-reproof in which his preaching has become, as he suggests, part of the problem and not the solution. However, he misses - or diplomatically avoids a trick. As images of the refugee crisis take over the giant screen, Bullet's last line is not changed to "... into the arms of Europe." 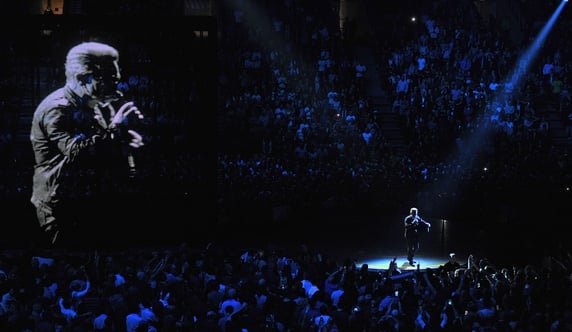 The encore is deft and deeply felt. To a dazzling visual display of Paris at night, U2 perform a shimmering City of Blinding Lights for the City of Light.

Urgent, political and still hungry after all these years, this latest incarnation of the U2 live show is never less than gripping.