The stars of Strictly Come Dancing have paid emotional tributes to Daniel O'Donnell following his elimination from the show, with professional dancer Anton Du Beke going as far as to say he's "a little bit in love" with the singer.

O'Donnell and professional partner Kristina Rihanoff lost out in the dance-off to TV presenter Kirsty Gallacher and partner Brendan Cole at the weekend, with all four judges choosing to save Gallacher and Cole.

After O'Donnell's goodbye dance with Rihanoff, the reality of life on the show without the Donegal man set in for the remaining contestants.

Call the Midwife star Helen George described O'Donnell as "The Godfather" of the show.

"He's brilliant, and such a gentleman and wonderful and kind. It's really sad," she said.

"People talk about the warmth of the Irish, and he exudes that in so many different ways," said TV chef Ainsley Harriott. "He's kind, he's considerate; he's the one that always puts the arm around you in the back [stage area]. He's so generous."

Peter Andre's professional dance partner, Janette Manrara, added: "He's just such a lovely man. He has not one mean bone in his body. He's always so pleasant, so friendly, so easy to talk to."

After his elimination, O'Donnell took the opportunity to salute everyone he had met and worked with on the show.

"Whatever I have given I have received ten-fold," he said.

As Rihanoff fought back tears, O'Donnell was somewhat lost for words when paying tribute to his friend and teacher.

"Kristina has been absolutely... Honestly, if people knew what this girl is really like." 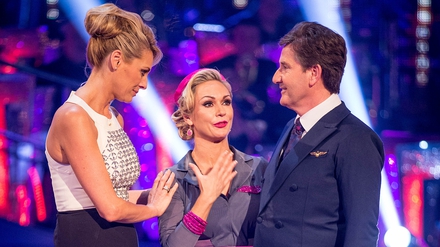 "It was such a joy to work with you," she replied. "Honestly, you are the most wonderful guy. So easy to work with, always there with a smile, always wanted to learn. It was actually an absolutely wonderful experience for me, so thank you so much."

"I want to say thank you to all the people that voted," O'Donnell added. "And everybody in Strictly, I hope you're going for 50 more years."

Can't find words to express my appreciation for your kind words for Daniel &I. So glad I got an opportunity to get to know a great person