Denis Villeneuve's nervy thriller about the US war on drugs runs on pure adrenalin. It’s set in a moral abyss where nothing or no one is as they seem

We’re back in the familiar cinematic territory of the badlands of the Mexican/US border in Denis Villeneuve's masterful thriller about the US war on drugs. But even more so than Ridley Scott and Cormac McCarthy’s fatally flawed and deeply pretentious The Counsellor or the Coen’s No Country For Old Men, Sicario trades in an even darker and more disturbing world of brute force and moral ambivalence.

The screen fades up with a explanation of the title: Sicario is Mexican for hit man. In the blunt shock of the opening scene, a macabre discovery is made by an FBI drugs team in the wall linings of a Cartel safe house in Arizona. Before we can catch breath, there is another eruption of savagery. From there, we are in doubt that we are in a very, very bad place with some very bad people. The drip, drip sense of dread never stops.

Emily Blunt gives a career-making performance as Kate Macer, an FBI operative with a touch of Clarice Starling’s idealism but who is also gripped with the gradual and terrible realisation that just like so many US foreign escapades, the war on drugs she is fighting is unwinnable. The Cartel’s tentacles are creeping into the southern states but cut one off, and three grow in their place. Kate is still young but her face is a haunted study in terror. How long can she keep this up? Her days are spent in a flak jacket and with an assault weapon; her nights alone in her stark and unwelcoming apartment.

When she is asked to join a covert taskforce determined to nail the men who are ultimately responsible for the carnage, Kate sees it as a last chance but her scepticism sets in early. This elite drug enforcement agency is never quite who or what they seem. Who they actually work for is never made clear either or, indeed, whether they have government sanction at all. What is clear is that they are committed to using extraordinary measures and sharp practices to combat the feudal drug lords of Mexico and their designs on American suburbia. 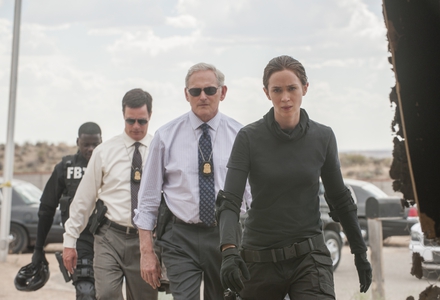 A game of crack smoke and mirrors

They are led by Matt Graver, a wonderfully arrogant Josh Brolin, who takes high-level meetings wearing a Hawaiian shirt and flip flops. He is a man who grins as the dance of death whirls around him but he seems like the only halfway straight character in a movie populated by sinister figures. But everything is dominated by the quiet presence of Benico Del Toro as Alejandro. He is an enigmatic free agent of sorts who doesn’t have much to say and whose very presence remains a mystery for the most of Sicario. Alejandro is the polar opposite of the good cop Javier Rodriguez in Steven Soderbergh's drug epic Traffic.

We are in a moral abyss and everything is lost in the fog of the drug war. Kate is more than just out of her depth - she is sinking into a quagmire of ambiguity and brute violence. The acting is superlative and the action is some of the best in recent cinema. In one of tensest sequences, the team have to negotiate a cross-border tunnel in the dead of night and Villeneuve - perhaps taking a cue from Zero Dark Thirty -shoots through the frazzle and glare of night vision goggles. A showdown at a border crossing choked with traffic leads to a hair-trigger and haywire shoot-out with innocents as collateral damage

Villeneuve, who has already impressed with Enemy and Prisoners and who is also attached to the upcoming Blade Runner reboot, has a lean and taut approach to filmmaking. There are aerial shots of parched deserts and mountains with the shadows of military aircraft high overhead rippling over the vast terrain below; moments later, cinematographer Roger Deakins’ camera is trained for long seconds on dust motes drifting in shafts of light. It’s all backed by an incredibly effective and nervy orchestral score from composer Jóhann Jóhannson.

Faces are studied in severe close-up and Blunt’s journey from confusion to anger and ultimately fear is shown in slow reveal. It is a great performance. Sicario just never lets up. Right to its terrible and traumatic ending, it is a masterpiece of low-key but powerful film-making with a menacing heart. Watching it is like being on a knife edge that slowly cuts into you.