Taylor Swift and Calvin Harris are spending the 4th of July weekend with a gang of their celebrity friends and have been sharing some rather loved-up snaps together online - see them here!

After flying in to Ireland to cheer on Swift during her two sold-out shows at Dublin's 3Arena earlier this week, Harris is now stateside with Taylor and the couple just can't help but share their love with the world.

Yesterday Harris posted a picture of Tay Tay rustling up a BBQ with the caption, "She cooks too."

Tay then shared an Insta of her getting a piggy-back from the Scottish DJ posting, "Friendly relations between Scotland and America."

The couple are joined for the holiday weekend by model Gigi Hadid and her boyfriend Joe Jonas, Haim, Bad Blood music video stars Martha Hunt and Serayah, and Tay's close friend Britt, among others.

Superstar DJ Harris and superstar Tay Tay began their romance after meeting at this year's Brit Awards in February. 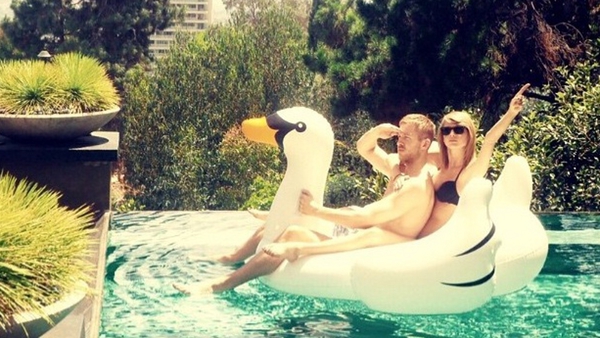