Tom Hardy is more mumbling than Mad in this unhinged and enjoyable reboot. Read our review

You can really smell the petrol in the air and feel the heat on your skin in George Miller’s bravado reboot of his 1979 classic of punk film making, Mad Max. Armed with a far bigger budget and a new cast, Miller lets loose in an unhinged actioner that really never lets up.

To borrow a phrase from the inestimable Julian Cope, this is the kind of carmageddon that will leave the kids from Fast and Furious gasping in its putrid wake.

Like its beloved predecessor, Mad Max: Fury Road combines eco parable with dystopian future - the human race has gone feral as water and petrol run low but where the new Mad Max is really very different is in Tom Hardy's portrayal as Max Rockatansky. In the opening seconds, he may gobble down a two-headed lizard but if Mel Gibson's Max was prone to demented unpredictability, this 21st century Max is darker and more haunted. He doesn't say very much either. He is mumbling Max.

As Hardy intones in his petrol-guzzling growl, “I was a cop searching for a righteous course.” Now he’s prey for demented land pirates in souped-up motors and satanic-looking 18-wheelers. They drag him back to the canyon citadel of the prosaically named Joe, a monstrous quasi-religious leader who keeps his ragged subjects at bay by cruelly rationing the water supply and keeping what’s left of the good earth to himself.

Meanwhile, Cherlize Theron channels her inner Ripley as Imperator Furiosa, a prized and respected warrior who goes rogue in a bid to escape the citadel and make her way back to the idyll of her childhood home. She’s brought along Joe’s harem of young brides, each glorying in names such as Fragile and Splendid, and possessed of beauty and purity (well, almost) in a world gone very ugly indeed.

From there, Mad Max: Fury Road essentially becomes one long multi-vehicle chase movie. It zigzags crazily across the charred landscape with Max, now allied with Furiosa, encountering or dodging his diabolical pursuers.

All the while, black smoke belches into the dead air and heavy metal collides under the searing sun. Close up, it sure is claustrophobic, grimy and oppressive but when Miller lets his camera open up, John Ford would be proud. The tiny actors are dwarfed by the beautiful landscape and the ultraviolet sky and, just like the posse who pursue Butch and Sundance, Max's fast approaching enemies can often be spied off in the far, far distance - black malignant dots coming ever closer amid a furious dust cloud.

In the down time between the industrial carnage, the cast spout mumbo-jumbo about the ``old world’’ and ``the green place’’. The plot here is secondary and the dialogue is minimal but there is much to savour visually. One war rig is fronted by a demonic guitarist who churns out speed metal on his multi-headed axe as we thunder across the desert. Six sets of massive drums are pounded relentlessly and it all put me in mind of the marauding Uruk-hai in Peter Jackson’s Lord of The Rings.

But like that blasted landscape, what Mad Max: Fury Road lacks is a real centre. It also replays variations on the same on-road carnage over and over. Despite those vast distances travelled, it doesn’t really go anywhere.

Neither is Hardy’s taciturn Steve McQueen act mad enough. However, for sheer spectacle and satisfying metal-crunch, it’s worth a trip down Fury Road. 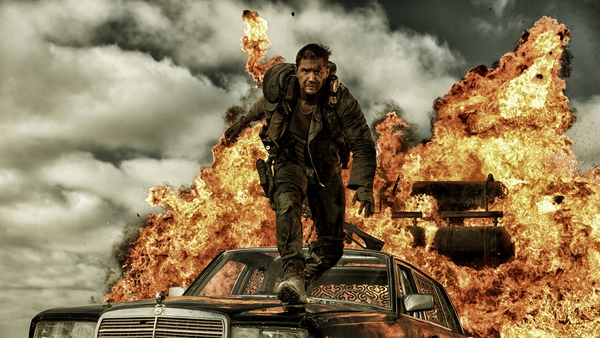