From one type of fall to another - Madonna has said that her tumble on stage while performing at the Brit Awards was the "most embarrassing moment" of her life and she's also revealed she's a big fan of TV thriller The Fall.

The singer told US Weekly: "The most embarrassing moment of my life was falling off stage - let me rephrase that, being choked off the stage by two little Japanese girls - at the 2015 Brit Awards. Extremely embarrassing!"

Madonna also spoke about her TV watching habits, saying The Fall is one of her favourite shows.

She said: "I don’t really watch TV. I only like two shows - True Detective and an Irish series called The Fall - and I’m not embarrassed about them. Many people say, 'The Fall with Jamie Dornan,' but I say, 'The Fall with Gillian Anderson.' She’s so good."

Madonna also revealed the person she would most like to meet. "The person I most want to meet is President Obama. When the heck am I going to meet him? He just needs to invite me to the White House already.

"He probably thinks I’m too shocking to be there. I’m serious. If I was a little bit more demure . . . or if I was just married to Jay Z. Hey, if Jay would only take me as his second wife, then I’d score an invitation." 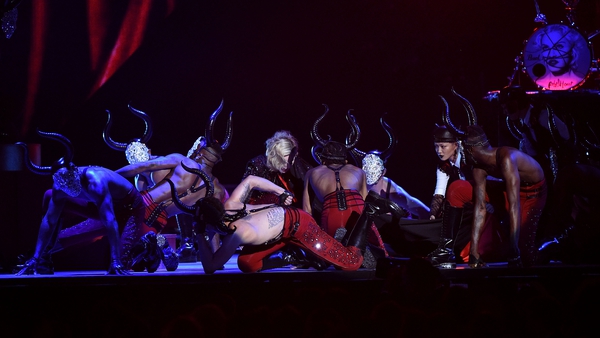 Madonna "fine" after fall at Brits