Julia Roberts has been unveiled as the new face of Givenchy's spring 2015 campaign.

The brand's creative director Riccardo Tisci has revealed that they chose the actress to represent the brand as she represents a "more mature" woman, and is not a "paparazzi or a blog monster".

Tisci told Yahoo Style: "A lot of people see Givenchy as only 'haute couture,' or only 'street and urban. For me, Julia is many things. She has this strength as an actress, but she's also this beautiful American woman.

"She's a big star, but she's not a paparazzi or a blog monster. It's going to be my tenth year at Givenchy in March, so I wanted to represent the woman who is more mature, beautiful, talented, but also unpretentious. "

Roberts stuns in the black and white images for the campaign, which show her wearing a series of stylish, androgynous pieces.

Tisci said of shooting the actress: "She was very professional. Sometimes you shoot someone who’s so popular, you try to make it glam, but I really wanted her the way she arrived: black jacket, men’s shirt, jeans, which is really what we have in common. No hair, no makeup.

"I said to her, 'Because your smile is so beautiful and everybody knows you for that, I think it should be no smile,' and she was really cool. She said we should go for it. We did it, and there we are, I’m very happy. It’s a powerful picture." 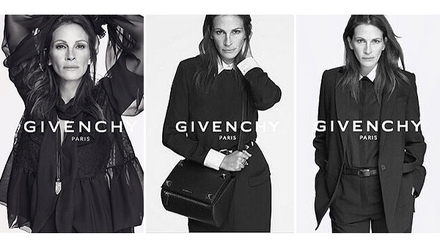