With Nightcrawler in cinemas from Friday October 31, writer-director Dan Gilroy talks about working with Jake Gyllenhaal on the acclaimed thriller about the nocturnal world of freelance news reporters.

Where did you first get the idea for Nightcrawler?
Dan Gilroy: A number of years ago I was very interested in a crime photographer from the 1930s and 40s named Weegee (the pseudonym for Ascher Fellig). He's actually become collectible among people who collect photography. He was the first guy to put a police scanner in his car, in New York City. This was, like, 1940. He would drive around and get to crime scenes before anyone. He was a wonderful photographer, but I couldn't figure out a way to do a period film, and so I put the idea aside and I moved to Los Angeles.

A few years ago I heard about these people called 'night-crawlers' who drive around Los Angeles at night at 100mph, with these scanners going. As a screenwriter, I thought, 'That's a really interesting world', but I didn't exactly know what to do with it. It was part of an idea. For me, ideas come piecemeal; they don't come fully formed. That was a part of the idea, and I didn't know what to do with it until I thought of the character to plug into it, which was Lou (Jake Gyllenhaal).

Once that character plugged into the world, it was like two parts of an atom that fit together, and suddenly it just made total sense to me, and I knew what I wanted to do with the world and the character.

Did you meet some of the real night-crawlers?
Yes, Jake and I and Robert Elswit, our DP (Director of Photography), went out a couple of nights with a guy named Howard Raishbrook, who was our technical advisor, and it was bloodcurdling. The first call we went to was a horrific car crash, in which three girls had been ejected from a car after hitting a wall head-on. I've got to be honest: I don't think I'll ever get that image out of my head. I think Jake and Robert and I were rather stunned, watching it, but the gentleman who filmed it very professionally got out of the car, shot the footage, edited the footage within five minutes, downloaded it, and sold it to four television stations.

Now, the gentleman who does this, I don't judge him, and actually he's become a friend of mine. He and the other people who do this very much see themselves as providing a service, and they legitimately are providing a service. In their minds, the stories that they're filming become the lead stories on local Los Angeles news, so if there's a demand to watch this, who am I to judge them? Or to say what they're doing is wrong?

Obviously, Jake's character crosses the line at certain points, and drifts into a world that's amoral, but I never wanted to portray them or the news media or even Jake's character in that way. I never wanted to put a moral label on it and say, 'This is wrong'. I think once a filmmaker applies immorality to something, it stops the viewers from being able to make a decision for themselves.

My morality might be very different from yours, and what I find important might be different from what your priorities are. We wanted to create as realistic a portrayal as possible of this little niche market and the Los Angeles media world, and let people decide for themselves who the villain is and what the issues are. 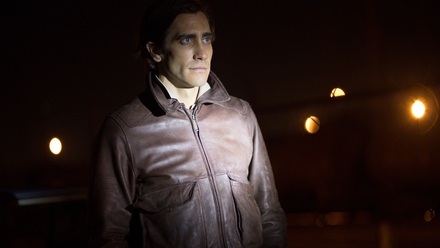 Did your own view on news change during the filming?
No. My view before I started the film and my view now is the same. I used to be a journalist. I used to work for Variety, a number of years ago, so I'm interested in journalism. But I'm aware that in the United States, a number of decades ago, networks decided that news departments had to make a profit, and historically they did not have to make a profit. I feel that once news departments are given the task of making a profit, news becomes entertainment, and I think we all lose something enormously important when that happened because rather than getting in-depth stories that educate us and inform us, we get narratives built to sell a product.

The narrative in Los Angeles, and I believe the narrative you'll find in most local TV news, and Michael Moore touched on this in Bowling for Columbine, is a narrative of fear. It's a very simple equation: if you're not watching the station you're in peril, because there are things outside that could kill you and your family, and if you don't watch this, through the commercials, you're not going to know about it. It's a very powerful formula, and it's very effective. That's what drives the whole equation. 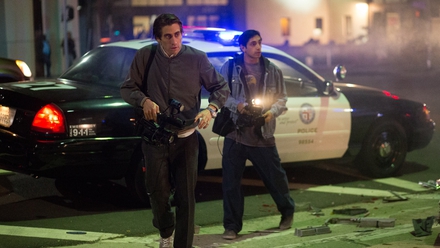 What should change?
It is such a big problem that there is no solution to it that I can really see. To be honest, I would not want to be the person to put any moral barrier to what could be shown. My only hope is that we should be self-aware.

As an example, when you drive down a freeway in Los Angeles and encounter a traffic jam, and you finally get to what happened, you suddenly realise that there's five dead people in a crash on the other lane, and everybody is slowing down to look at what's going on. I tell myself, 'Don't look. Don't become part of the problem'. Sometimes I succeed and sometimes I don't. I would hope that when people watch the movie, they think, and they become a little self-aware – 'Why do I watch this? Not that I shouldn't watch it or should watch it' – but just to be aware of the world that we live in is, I think, my biggest hope.

Jake Gyllenhaal's character Lou seems to represent millions of unemployed young people, who are increasingly asked to go further and further to prove their value.
You've absolutely nailed the genesis of the character. I'm very aware that there are tens of millions of young people around the world who are unemployed, whether it's globalisation or corporatisation, or whatever you want to call it. Young people just have very little hope of meaningful careers. It's internships that don't pan out, it's no health insurance, and I'm very aware of that.

I started with Lou as a character who desperately wanted work, and he gives a speech to the salvage yard owner early on, and in the self-help world of the unemployed, that's called an 'elevator speech'. The reason it's called that is, some day you may find yourself in an elevator with someone who can give you a job, so you should be able to sell yourself in 30 seconds.

Lou wanted the salvage yard job. That would have been a great job for him. He's not out to hurt people. He's just a desperate young man, and there are many desperate young people out there who are being forced, I think, to make decisions and take jobs that they normally wouldn't. 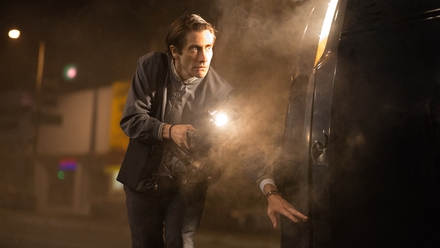 What were your conversations with Jake like?
Very intense and very deep. I flew to Atlanta when he was shooting Prisoners to discuss him doing the part. We had a dinner and we decided very early on that we were going to collaborate intensely, with a lot of rehearsal.

I'm sort of a degenerate gambler and I just like taking risks. Jake is just utterly fearless and he wanted to try things. He respected the script, and not one word of the script got changed.

He approached it like a play, so I was extraordinarily happy to work with him because he respected the work, and I wanted to respect his ability to come in and breathe life into it in a way that I was not capable of. As an example, the weight loss – that was Jake's idea.

How did he propose that to you?
We were talking a lot about the symbol of the character, and we thought of a coyote. There's never a fat coyote – they're always perpetually lean. They're just always hungry and they come down out of the hills at night to feed, so we thought of Lou as a nocturnal predator. Jake said, 'Coyotes are always lean. I'm thinking of getting a coyote look'. I said, 'Great'.

But to be honest, as a filmmaker, with people you're responsible for, it's a scary proposition. It all makes sense now, but believe me, when he lost 25 pounds and we started shooting dailies, it's scary. You start looking at it going, 'Oh my God, is this really what we're going to go with?' But it works perfectly. When you watch Prisoners, Jake created that persona, with the tattoos and the eye tick. That's terrifying to a filmmaker. But you have to go, 'That's a really interesting idea. Let's try that'.

Jake wants to try, and you get your best with Jake when you allow him to try. I think Jake and I got along so well because we were not afraid to try. There were moments when Jake would do something on set and even I wasn't sure. I was going, 'That's probably too far out there'. Then you're in the editing room, going, 'Damn it, man, that is definitely what you want to do'. It was just a joy working with him.

What was the biggest challenge in making this movie?
We had 80 locations, and only had 28 days to shoot it. There were many times that we moved two different times in a night. You're taking 100 people and a line of vehicles that stretches almost a quarter mile, moving from one location at 2 o'clock in the morning, and then you have to get to another location and shoot another three pages. The weird thing is, on most films, when you're shooting outside on a tight budget, it's usually when the sun goes down that you start to go, 'Oh, that's the end of the day'. For us, it was when the sun came up. Once the birds started chirping, it was, 'Oh, God! The sun is coming up. Just give us another five minutes of darkness'. That was the hardest part.

Have the real night-crawlers seen the film yet?
Oh yeah, Howard saw it with his brothers – he works with his two brothers – and they loved it. They loved it because it was accurate. It was very important to them that it was accurate. They'll say, 'We don't do that kind of stuff', but they wanted the police codes to be right, they wanted their jargon to be right. They said, 'If we're involved, it has to be real. You have to really show them what it's like'. It is utterly real.

How do you feel about the Oscar buzz that's surrounding your film?
It's very heartening that people put us in that sort of category, but it's nothing I think about or really try to pursue. I think it's dangerous to step out and wave your hand and go, 'Hey, here we are, look at us'. I think once you try to put yourself into the spotlight, it could backfire. I just want people to find the film, and see what develops from it. If it develops into that then it would be wonderful, but it's too early for me to think about it.