We have a fantastic prize to give away, 2 pairs of tickets to Shrek The Musical on October 22, which is a special VIP night at The Bord Gáis Energy Theatre.

To be in with a chance of winning, just send your answer to the following question, along with your name, address and phone number to tencompetitions@rte.ie

What is the princess' name that Shrek falls in love with?

You must be available to attend the show on October 22 as this prize is non-transferrable. Under 18s must be accompanied by an adult.

Closing date is Sunday, October 19, 2014. Winners will be notified the following day. Editor's decision is final.

Shrek The Musical comes to the Bord Gáis Energy Theatre from October 21 to November 9, 2014. Check out www.bordgaisenergytheatre.ie for tickets. 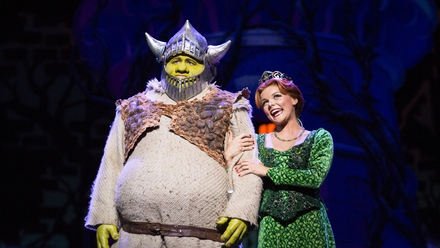 Speaking to RTÉ TEN ahead of his role as Shrek in the musical, Dean Chisnall, revealed that he's "so excited" to bring the show to Dublin.

He said: "I am so excited. I have so much love for this show and this character. I did it in London originally and bringing it on tour is just brilliant. It's very rare these days to bring an entire West End production on tour. It's just such an exciting thing to be part of.

"It will be our first time in Dublin. I've never been to Ireland. It's going to be a whole new experience. I hope, and we think, it's going to go big there. I'm looking forward to it." 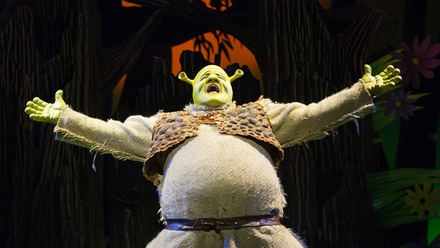 We, of course, had to ask Dean about the process involved in becoming the green ogre.

He added: "The process is quite extraordinary. The make-up takes two hours alone. I'm in the chair at about 3.30pm to 4pm for a 7pm performance. It's a big commitment but it's worth it because no expense is spared. It's all in the detail. I can't complain. It's all part of my job and I love it."

Click below to see how Dean is transformed into Shrek!