Nancy Birtwhistle has been chosen as the winner of The Great British Bake Off 2014.

Birtwhistle beat off competition from finalists Richard Burr and Luis Troyano to be crowned the winner of the coveted title.

The contestant impressed the judges with her Moulin Rouge-inspired Showstopper cake, which judge Paul Hollywood described as "beautiful", while Mary Berry said she "should be very proud" of her windmill effort.

Birstwhistle said of her win: "I don't know how I'm feeling really, absolutely overwhelmed and a bit emotional. Who could believe it that I could win?!"

Berry explained their decision to crown her the winner on Bake Off: An Extra Slice, saying: "She's a really good family cook. She's a perfectionist."

Hollywood went to praise the two runners-up, saying: "This has got nothing to do with the person themselves. Richard [Burr], never the less, and Luis [Troyano] are both unbelievable bakers." 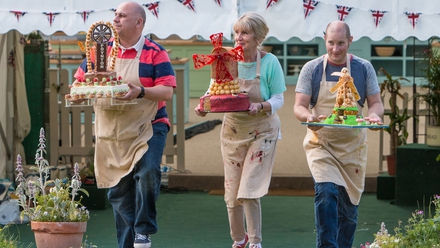 The three finalists with their showstopper cakes