Check out the pics from Brad Pitt and Angelina Jolie's nuptials below.

Finally the pictures fans has been waiting for - the wedding of Angelina Jolie and Brad Pitt. The A-list couple have always said they would marry when their children asked them to, so it comes as no surprise that they played a huge part in the ceremony.

For starters Jolie allowed Maddox, 13, Pax, 10, Zahara, 9, Shiloh, 8 and twins Vivienne and Knox, 6, decorate her wedding dress. Jolie walked down the aisle in white satin gown and long veil, both of which were adorned with colourful artwork by her children. 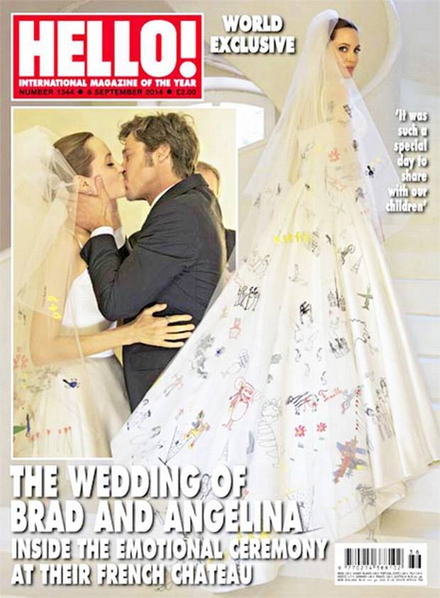 The dress was designed and made by Atelier Versace master tailor Luigi Massi who Jolie has described as family. Speaking to People and Hello! magazine, which features the wedding pictures, 39-year-old Jolie said: "Luigi is like family to me and I couldn't imagine anyone else making this dress.

"He knows and cares for the children and it was great fun putting it together."

Maddox and Pax walked their mum down the aisle wearing black suits, while Zahara, wore a dress designed by family friend Adama Kebe. She was flower girl alongside Vivienne who wore a white dress from her wardrobe. Shiloh and Knox were joint ring bearers, with Knox in a suit and Shiloh in black dress shorts and shoes, a white shirt, black tie and top hat. 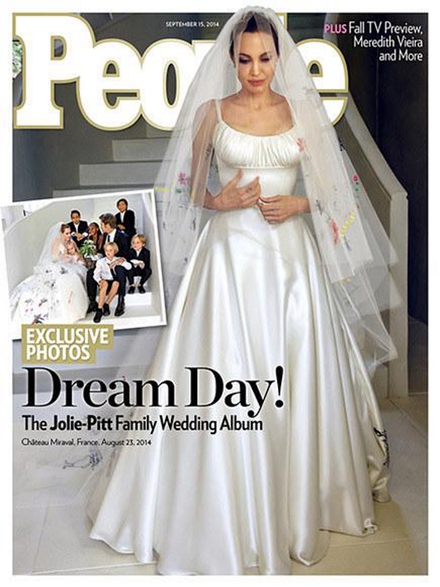 50-year-old Pitt chose a suit from his own designer closet and borrowed a tie from one of his sons.

Speaking to the publications the newlyweds said: "It was important to us that the day was relaxed and full of laughter.

"It was such a special day to share with our children and a very happy time for our family."

The intimate celebration feature in this week's People magazine, in conjunction with UK's Hello!.