Elbow frontman Guy Garvey has said the band smuggled "a case of Guinness, a case of lager, a load of spirits" backstage at the 2012 Olympics Closing Ceremony to beat an alcohol ban.

During an interview on BBC Radio 4's Desert Island Discs broadcast on Sunday, Garvey recalled: "We were told it was a dry backstage until 10 o'clock. No booze."

He continued: "And I was like, 'Alright, who's saying that? Who's 'they'?' And they were like, 'Well, the people producing the closing ceremony', and I was like, 'Yes, who are they? What gives them the authority?'

"I got really stroppy, which is not like me. So we ended up smuggling in a case of Guinness, a case of lager, a load of spirits."

Asked how the band had managed to get past security with the stash, Garvey replied: "I don't want to get anyone in trouble, but in Madness's flight cases. Them boys are great, I'm sure they wouldn't have minded - in fact, they partook, so there you go.

"But then it was amazing - word got round that Elbow had the booze and we had the great and the good... Brian May knocked on [the door] for a beer. Timothy Spall was my favourite."

Garvey added: "Me and Tim Spall, now, are really good buddies. I had a great night with him. He had Kate Moss coming up to him and all these wonderful beautiful models and he was still dressed as Churchill and we're well sozzled."

Listen to the interview at: http://www.bbc.co.uk/programmes/b006qnmr. 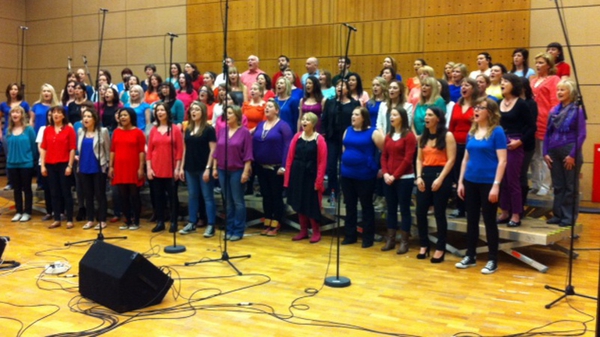 Watch: RTÉ choir sings Elbow's One Day Like This