In The Honourable Woman (9.30pm BBC Two),Nessa discovers a secret which Atika has kept from her, for which she feels a deep betrayal. Pet Island (7.00pm RTÉ One) is a new series on Irish pets and their owners, while Kids and Guns (10.00pm Channel 4) looks at a chronic situation in the USA, where parents insist that their children use firearms, despite the 3000 children plus who lose their lives accidentally each year.

Nessa discovers a secret which Atika has kept from her, for which she feels a deep betrayal. At a University in Israel which is heavily funded by the Stein family, a computer science professor uncovers a corrupt admissions policy whereby Arab students are being denied places on courses in favour of Israelis. Classy and gripping series starring Maggie Gyllenhaal as Nessa Stein, Andrew Buchan as Ephra Stein, Janet McTeer as Dame Julia Walsh; Stephen Rea  as Sir Hugh Hayden-Hoyle; Lindsay Duncan  as Anjelica Hayden-Hoyle. 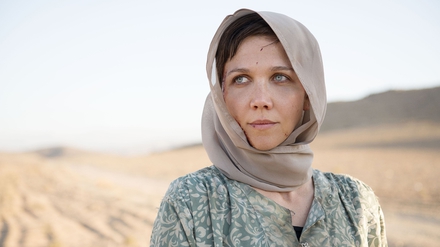 In episode one of this new series on pets, their owners and their oddities, meet Ireland’s most glamorous pet owners, Martin Bailey and his fianceé Jennifer Duggan. They live with six Maltese and an Old English Sheep Dog called Guapo who dreams of being crowned Best in Show in Ireland’s biggest dog show. In his way stands Cork Groomer Colm Hastings and his American born dog, Vicky. We also meet a group of cat ladies who agree to trial a product which claims to train your cat to use the loo. In other words, madcap adventures with Ireland’s most pampered pets and their besotted owners. Martin Bailey pictured with Guapo, below. 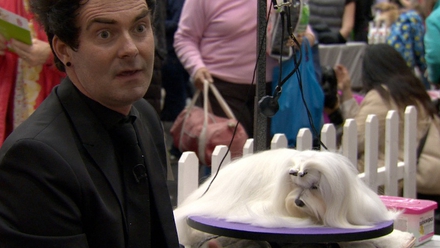 Some American parents consider teaching children to shoot a fun family experience. Yet more than 3000 children are accidentally shot each year. This documentary explores the world of child shooters, and meets the parents of children who have been killed by guns. Also featuring are parents who insist on showing their children how to use firearms, irrespective of how the children feel about this imposition.