Red Hot Chili Peppers have said that they had no choice about miming elements of their Super Bowl performance due to sound issues and they have no regrets about it.

Bassist Flea wrote about the band's half-time performance with Bruno Mars, on the RHCP official website: "We had given this a lot of thought before agreeing to do it, and besides many a long conversation amongst ourselves, I spoke with many musician friends for whom I have the utmost respect, and they all said they would do it if asked, that it was a wild trippy thing to do, what the hell.

"I am grateful to the NFL for having us. And I am grateful to Bruno, who is a super talented young man for inviting us to be a part of his gig. I would do it all the same way again."

He added that the NFL were worried about sound and time issues involved with setting up the show: "When we were asked by the NFL and Bruno to play our song Give It Away at the Super Bowl, it was made clear to us that the vocals would be live, but the bass, drums, and guitar would be pre-recorded.

"I understand the NFL's stance on this, given they only have a few minutes to set up the stage, there a zillion things that could go wrong and ruin the sound for the folks watching in the stadium and the TV viewers. There was not any room for argument on this, the NFL does not want to risk their show being botched by bad sound, period." 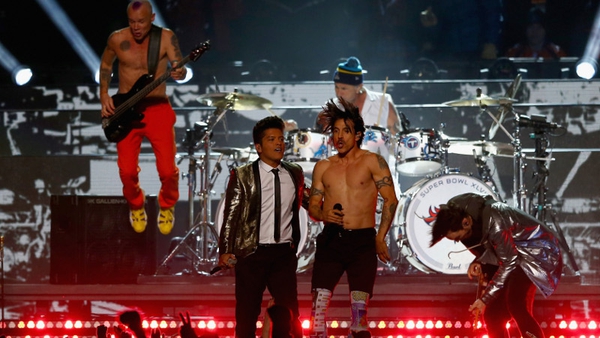