Ahead of Sunday's Golden Globes, 12 Years a Slave is now in Irish cinemas. Harry Guerin experiences it and talks to the director and star.

Cinema releases thrive on positive hyperbole, but a film like 12 Years a Slave really is that rare thing. Its director, Steve McQueen, has said that for all the depictions of American history on the big screen, fewer than 20 have been about slavery. His response to that damning statistic has been to make the definitive one; a searing indictment of people at their very worst, an inspirational true story of transcendence and, most importantly, a long overdue honouring of Solomon Northup, a man who McQueen rightly describes as "a real American hero".

The film is based (very faithfully) on Solomon Northup's (Chiwetel Ejiofor) brilliant, but largely unknown 1853 memoir of the same name. It chronicles how the free man of New York is conned, kidnapped and sold as a slave to two Louisiana plantation owners, first William Ford (Benedict Cumberbatch) and later Edwin Epps (Michael Fassbender). It's not a matter of Solomon revealing his true identity and going home: his papers have been destroyed, a crime has been committed and there would be no hesitation in someone murdering him to cover it up.

As in the book, just when you think things cannot get any worse for Solomon they do, with his time working for the conflicted Ford followed by over a decade in the service of Epps, a monster who sees him as a threat to his authority and, ultimately, his way of life. But by hiding his intelligence and background and going deeper into himself, Solomon finds a way to survive these killing fields, always looking out for the moment when an opportunity for freedom will arrive.

Watch interviews with Steve McQueen and Chiwetel Ejiofor by clicking the links above on your left or below.

This is a harrowing and heartbreaking watch, with some scenes of extreme physical violence and plenty of mental cruelty - white delusions ranging from following God's word to being 'kind'. But it's a story you have to see. Not since Schindler's List has an Oscar contender been so deserving of the widest audience possible and so important to hand down to future generations. How chilling to think that the issues it raises are still part of the lives of millions today.

From the sweaty cinematography to the constant tension to the powerhouse acting, Hunger and Shame director McQueen ensures that your immersion in this world is absolute - two hours where you're stuck to the seat, sad, angry and desperately waiting for any morsel of hope. It's hard to see past his work for Best Director and Best Picture at the Oscars. If he wins he will be the first black filmmaker to do so.

As for his stars, Ejiofor's promotion to the leading man ranks has been a long time coming, but he takes this opportunity with such intensity and depth that his Solomon is unforgettable. The flip side to the goodness and grace of his character is Fassbender's Epps, a performance so terrifying and unpredictable that the only comparison that comes to mind is Ralph Fiennes in Schindler's List. It may be just too out there for Oscar voters, but Fassbender would also be the worthiest of winners - as would co-star Lupita N'yongo, superb in her first major role as Patsey, the slave who endures the wrath and lust of Epps.

McQueen says that the one lesson he has taken from all his films is that the most important thing in this life is love. In the depths of hell here, love is what keeps Solomon going, and the audience willing him on.

Not even two weeks into January and already many people will have their film of the year. 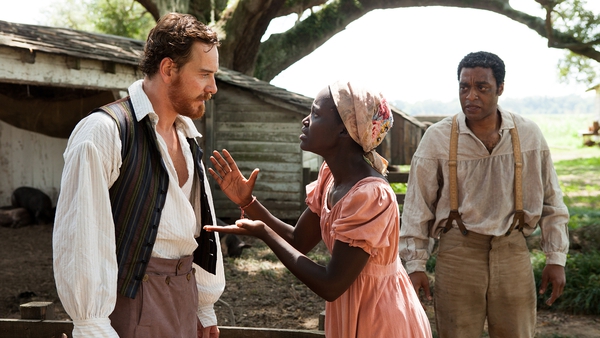