Christopher Walken delighted two of his fans by accepting their offer of a lift through New York when they spotted the star struggling to hail a taxi.

The two men were driving through Manhattan when they saw the Seven Psychopaths star trying to hail a taxi so they pulled in and offered him a ride.

One of the fans detailed the encounter via their Reddit account saying, "I was driving down Amsterdam Avenue on the Upper West Side with my friend Ash on Tuesday. Ash yelled 'Yo man, that was the king of New York (referring to his 1990 film of the same name).' I pulled over and backed up all the way down the block.

"Christopher Walken was hailing a cab. We told him we are huge fans and offered him a lift. He responded politely 'I don't want you guys to go out of your way. I am going straight downtown and you can leave me anywhere'. He got in the car and we went on talking about stories from growing up in the city. He is an incredibly nice person, the conversation was great and Mr. Walken thanked us again for the ride."

The fan, known by his Reddit username Zendouble, also posted a picture of Walken in the car with him and his friend with the caption, "This guy couldn't catch a cab in NYC so my friend gave him a ride." 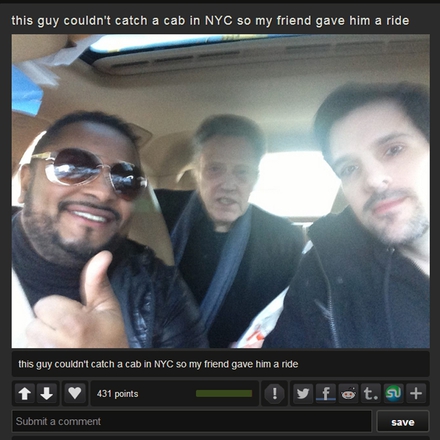