Candy singer Robbie Williams thought that Lily Allen was going to back out of their duet on his new album Swings Both Ways.

The 39-year-old former Take That star admitted that he thought Lily wasn't serious about teaming up with him to sing the 1931 classic Dream A Little Dream.

Speaking to his biographer Chris Heath on Facebook, Robbie said: ''Lily thought that Guy was the piano player for the Groucho club and she said: Do you know Dream A Little Dream? He played it, she sang it and he said ' I work with Robbie, do you want to come into the studio and sing It with him?' She said yes - then you'd think that maybe she'd wake up the next day and go, 'Oh did I say yes? I meant no,' but she didn't. She came in and sang it with me.''

He added: ''She opened her mouth and the moment the first note came out it was a beguiling sound and I don't know, I sort of took a sigh out when she started singing. It was beautiful. She's got a great voice.''

Olly Murs also collaborates with Robbie on his album for I Wanna Be Like You, and Robbie revealed that the pair became close when Murs supported him on his Take The Crown stadium tour earlier this year.

He further pitched in: ''I had a bond with Olly right from the beginning because I recognized a lot of me in him. He's a showman, there's not many around in the industry and he's very likeable and he sings really well too.'' 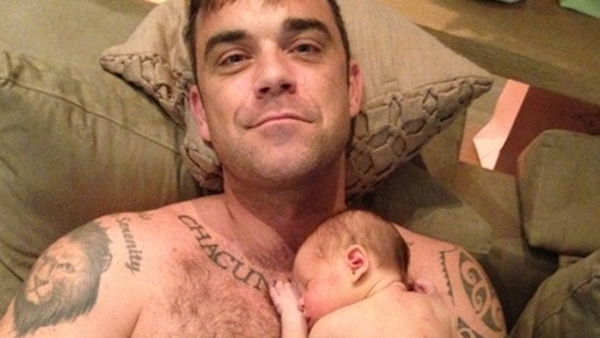 Robbie Williams fears for his daughter