Superhero sequel Thor: The Dark World is in cinemas now. Harry Guerin finds out whether it's Asgard as it gets.

With Kenneth Branagh bringing luvvie gravitas behind the camera, Chris Hemsworth doing his best Royal Shakespeare Company audition in front of it and the RADA-trained Tom Hiddleston stealing the show from all his co-stars, 2011's Avengers-primer Thor was classier knockabout fun than some of us had expected. $449m at the box office proved that there was a hunger for a fella with a hammer and The Dark World will rake in even more. However, it's not the classic it had the potential - cast, director - to be, or, indeed, that many expect for shelling out for every new Marvel movie.

In the first movie, Thor (Hemsworth) was an outcast, but, one year on from the events in The Avengers, The Dark World finds him as heir apparent and taking care of business in the name of Asgard. Trouble is he's still hankering for humanity, and in particular astrophysicist Jane Foster (Natalie Portman). Their paths cross when a McGuffin called the Aether is rediscovered and Dark Elf despot Malekith (Christopher Eccleston) awakes from his slumber to be reunited with it. The Nine Realms are once again in great danger, and only a combination of brawn and brains can save them.

While front-loaded with a fair chunk of Asgardian history and filled with enough stuff to make anyone who gave up science after the Inter Cert feel inadequate, The Dark World barrels along at yawn-banishing pace, adhering to Marvel's punch-ups and punchlines blueprint throughout. Like April's Iron Man 3, it's actually the banter and laughs that provide the most enjoyment - two brief worlds-clash gags in particular are better than all the battle scenes put together. There's a lesson there.

Along with the familiar superhero themes of sacrifice, moral dilemmas, envy etc, you will also find two problems that have dogged many a Marvel movie: an over-reliance on metropolis thrashing and dull villains. Greenwich in the UK is reduced to rubble here but it's no better a spectacle than what happened to New York in The Avengers. The Dark Elves, meanwhile, live in the same charisma vacuum as the Frost Giants from the first Thor adventure. Cast as their leader, Eccleston is a far better actor than what he is given to work with here – Ulster-Scots-after-six-shots-of-tequila dialogue and a look that puts him somewhere near the front of the stage at a Fields of The Nephilim show circa 1988. The fact that his minions' eyes recall the Tellytubbies' is also unfortunate.

No surprise, then, that Hiddleston is the best thing on screen once again as Loki, and it's the scenes involving him where director Alan Taylor is allowed to bring the dynamics of his regular Game of Thrones gig to the fore. Now, if only the two of them could work together more often...

The stick-around-for-the-credits epilogue ranks as Marvel's oddest to date, and, really, the film's actual cliffhanger would've worked far better in that slot. Another thing for the moguls to take into account or risk facing the greatest terror of all: a fall in profits. 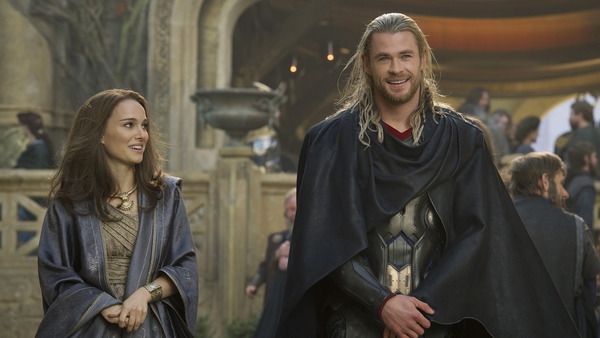