RTÉ's Big Music Week train will be touring the country from Monday September 30 to Saturday October 5, bringing the very best of home-grown musical talent and live performances to audiences across Ireland and all over the world.

During the first week of October, the RTÉ Big Music Week Train will visit some of Ireland’s best-loved venues and most-travelled stations, capturing the magic each day and bringing it to audiences through broadcasts on popular shows across RTÉ Radio 1, 2fm, lyric fm, RnaG, RTÉ One and RTÉ Two television, and of course right here on RTÉ Ten.

You will be able to catch a wealth of live performances by renowned artists like Christy Moore, Kodaline, Paul Brady, Damien Dempsey, Lumiere, Julie Feeney, the RTÉ Concert Orchestra and many, many more on radio, television, online and on mobile. 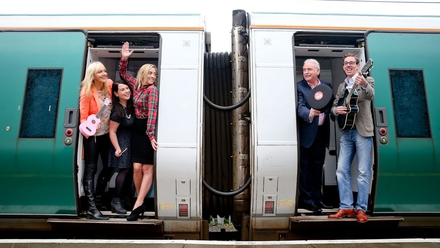 The John Murray Show on RTÉ Radio 1 will open celebrations on Monday morning, bringing a special live performance from Connolly Station with the RTÉ Concert Orchestra and top acts Kodaline, Damien Dempsey, Luka Bloom, the Artane Band and the Bugle Babes as well as a special one-off session with the incomparable Christy Moore later in the week.

The John Creedon Show, also on RTÉ Radio 1, will be live on Monday, Tuesday and Wednesday evenings, broadcasting concerts from the Theatre Royal in Waterford, the INEC in Killarney and Matt Molloy’s pub in Westport, Co Mayo, with exclusive performances from Eleanor McEvoy, Lumiere, Sharon Shannon and Mundy, to name just a few.

Wednesday morning sees 2fm’s Ryan Tubridy in Limerick for a live show with Hermitage Green, who stop by for a session in the station. Listen out too for lots more chats, interviews and live music on RTÉ Radio 1, RTÉ 2fm, RTÉ lyric fm and RTÉ Raidío na Gaeltachta.

Each evening on RTÉ One television, tune in for an update of the day’s events with a nightly recap and watch out also on RTÉjr, which will be taking to the tracks to check out the abundance of passion and talent that young Irish people have for music nationwide. RTÉ Big Music Week will also pop up on Nationwide and The Works during the week and, for the grand finale on Friday night, the Big Music Week Train will reach the end of the line with a special performance on the The Late Late Show, debuting a specially-commissioned Big Music Week song, written by Irish songwriter Brendan Graham and performed by some of Ireland’s best vocalists.

You can also stay up-to-the-minute on what is happening during RTÉ Big Music Week, through all RTÉ's digital platforms. RTÉ Ten and RTÉ YouTube will have all the latest Big Music Week videos and here at Ten we will also be brining you all the on board gossip each day. On Twitter, join in the conversation using #bigmusicweek with @rte.

Throughout Big Music Week, at each and every stop, there will be plenty of opportunity to be part of the excitement in your own town and details on how to win places on this very unique musical train journey, as well as how to buy tickets for any of the benefit gigs, can be found in the Event Schedule on www.rte.ie/bigmusicweek