The candidate fired by Alan Sugar on Tuesday night's The Apprentice on BBC One has said that their name will "go down in history".

Zeeshaan Shah was on the receiving end of the Sugar boot after the team he project managed, Team Endeavour, failed to win their task in Dubai, losing out by £90 to Team Evolve.

However, the experience did not dent his confidence and he said after his dismissal: "I have so much more to offer. The name Zeeshaan will go down in history. I'm not sure how exactly, why as yet, but it will."

This week's task involved sourcing items for the lowest price for a luxury hotel, with Shah's previous experience of living in Dubai failing to give his team the edge.

Sugar told him in the boardroom: "Zee, I think you put yourself forward as someone who knows it all, and clearly you don't know it all.

"Zee, your idea of coming into business with me is going to be with international trading in real estate and you've just demonstrated to me that you can't deal internationally. You are to blame for this task. It was out of control. Zee, you're fired."

Shah believes that Luisa Zissman will win the show. 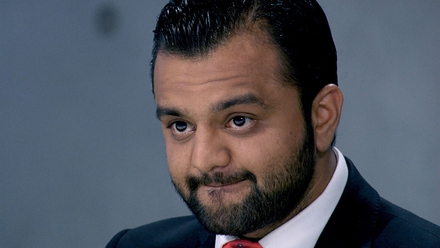