They have sung for President Obama and The Queen of England, scored a record-breaking run of No.1s, but now Westlife have called quits on their long career. “We’ll all cry at our farewell gig in Croke Park.” they tell Alan Corr

It is a few short weeks after Westlife announced their break up and one half of the band is sitting in a Dublin 4 hotel suite. This opulent establishment has been a home from home for the boyband over the past decade, the chosen HQ where they come to talk to the media and peddle the ultimate boyband dream.

But today is different; we aren’t here to hear Westlife polish up their promo speak but to listen to them relive their glory days and explain why they have decided to call it quits after 14 years at the top of the pop pile.

In case you’ve too been to busy watching Downton Abbey and Love/Hate over the last couple of months, Westlife have broken up. Not split up (too negative sounding, apparently) but they have decided to draw a glitzy veil on their frankly remarkable career as one of the world’s most successful boybands. Sitting in front of me are Kian Egan and Mark Feehily. Outside it’s a Grade A grey day but inside their hotel suite, the once and future (?) pop princelings exude nothing but good vibes and bonhomie. However, what they exude the most is a palpable sense of relief that it is all coming to an end.

Westlife don’t bow out for good until their farewell gig in Croke Park next June but already plans are being made for the future and they are getting used to talking about their band in the past tense. The relief is understandable. Think about it: since the age of 17, these boys have been on a demanding treadmill of recording, promotion and touring. Along with sitting on those stools for a living and staring meaningfully into the middle distance, that’s got to take its toll.

Kian and Mark are here to put on a united front but perhaps they betray different sides of the story of the Westlife break-up. Today Feehily, the band’s deep-thinking ‘quiet one’ has an almost serene poise while Egan is his usual garrulous self, despite the endless rounds of interviews and TV appearances since they announced their split last October, He looks and sounds like he’s been doing a lot of talking over the past few weeks and he’s clearly not talked out yet.

“The natural thing for people to think is that because Westlife have been around for so long that we’re all retiring”, he says, before I’ve even asked a question. “I’m 31 years old and so is Mark which is still very young. We’re not going off to rest on our wicker rocking chairs. That’s not going to happen. We’re all still very young and very driven.”

Mark is sitting a bit off to my right, half turned away, but still watchful and patient as his long-time bandmate does the majority of the talking like a company director winding down a long partnership. The whys, whens and hows of the break-up have been trotted out before so maybe we should first consider Westlife’s long career.

Say what you want about their music (and people always did), they handled the business of being in a pop band with real aplomb. As well as those 26 top ten hits including 14 number one singles and 11 top five albums with total sales of 44 million globally. All in their early 30s, they are made for life and they’re more than having the last laugh at the people who dubbed them ‘Shelf life’. In fact, in terms of longevity Westlife are The Rolling Stones of the boyband world. “We lasted 14 years. You can’t compare it to anyone else”, says Kian. “There is no other act in the world that has done what we’ve done. We’ve done 11 albums in 14 years.”

“Is this our 12th or 13th album?” asks Mark of their farewell best of compilation. “This is out 12th”, says Kian. “In the space of time we’ve been around I’d like to know if there is another act that has put out that many albums”, says Mark. “I think we’re kind of freakish in boyband land to have done what we’ve done and in a way I’ve no idea how the hell we did, but we enjoyed doing it.”
The first outward signs of a break-up came last March when they parted with Simon Cowell and his Syco label saying they felt “unloved” as the music mogul concentrated on the area where the real money is in the music industry these days – reality TV shows.

Unlike most splits (sorry, break-ups) in music, Westlife’s was a carefully orchestrated; they had mulled over it for many years but if you looked beyond those videos and image, the cracks were showing.

“Over the past few years we kinda had to fly the plane ourselves”, says Mark. “Louis Walsh is a massive consultant in Westlife land but he wouldn’t want to nor does he control every decision we make. At the very beginning, we were surrounded by people who advised us and maybe told us what to do and over the years our careers developed and we ended up in the end running our own careers. We’re clever enough to realise that if we kept doing that we could end up spoiling something very special. We thought, let’s leave it and be able to look back and remember it as still magical instead of letting the stress age us, wreck us, wreck the band. Stress can ruin lives.”

But who first mooted the break up? “I don’t think anybody actually did”, says Kian. “It’s very tough. I think we all mentioned it over the years. We always kind of knew in the last two to three years that it was coming. It always got spoke about when we had a few drinks. We’d throw it around as a bit of a laugh and then recently when we talked about doing the greatest hits and we were offered a renegotiation from the record label, that’s when it got serious. We had a chat and it snowballed from there. I think it’s very important that we say that not one person said ‘I don’t want to do this any more’ so therefore the other three have followed. It has been a big decision made by all four members of the band.”

“The beauty is that we have so much time left in Westlife. It’s not like we announced it and then we’re gone”, says Mark. “But I think it hasn’t hit me yet. I can be quite a deep person. I think it’s important for me to prepare for the end and important to prepare other things to do and to start structuring things so I don’t just fall off the edge of a cliff and be left with nothing.”

“We did a TV show in London the other night and we were singing Queen of My Heart and I started getting emotional because I thought we’re singing Queen of My Heart on our last TV show and I started thinking of the lyrics and the chorus – ‘I’ll always look back as I walk away’ – and I was saying to myself, ‘Jesus, Kian! Calm down! This isn’t the last time you’re going to sing this song’, so there’s no debate we’re all going to be floods of tears at the last gig.”

When I ask them what they’ll miss after their finally lay down their microphones at Croke Park next June, Kian is quick to answer. “The concerts”, he says. “For me that will be the thing I’ll watch the most when I’m sat at home twiddling my thumbs. I’ll pull out the DVDs. We just did a tour of Asia for four weeks and we all knew this was coming, that we were coming home and breaking up. But it was probably the best tour we’ve ever done because it was just the four of us on the road together having the best laugh. We videoed an awful lot of stuff which is just for us when we’re drunk and falling around the place.”

In the end, it was the stress what did for Westlife. Kian talks in great flurries of words explaining the motivation behind the break-up, almost as if he’s trying to convince himself and he keeps mentioning the stress of it all. “The worry and the stress of ‘are we going to manage to do this?’” he says. “We have been extremely stressed out trying to keep Westlife going for the last few years. It hasn’t been an easy task, it’s been sitting up at night having three, four-hour conversations worrying about the right song, the right thing, the right that . . .

"Ringing up Shane and Mark and saying, ‘Oh please do this and please do that and they really want us to do this’ . . . I think that’s the thing I’ll miss the least!”

It’s likely that Nicky will go into politics (joke), or at least TV, Kian has his position as a judge on The Voice of Ireland in the New Year, Shane’s business empire has taken a bit of a pounding this year so he’ll be busy, and Mark has already hinted that he would like to launch a solo career. “For me, I’d feel a bit robbed if people think I’m not going to become a songwriter”, he says. “I think it’s an all-round creative level I want to be on. Songwriting is one of them but there’s a lot more to me that I want to do.”

But really you want to go solo? “He should”, says Kian. “No listen”, says Mark firmly. “One of the things I’ve definitely wanted to do is make music, it’s gonna be a natural thing for me to do”, says Mark. “The day Westlife finishes, I’m still gonna want to do that. I want to focus on making music but instead of saying it’s this big solo career or deal, I want to focus on just doing what I love and hopefully that can become something a successful career.”

They’re looking forward to their last Christmas as members of Westlife but six months after that, they will face the final curtain and that fateful final night in Croke Park. It may be the third time they will play the venue but this is different. This, they keep repeating, will be the last time Westlife will play together.

“Yes we will cry”, says Mark. “A lot.” “Playing Croke Park the first two times was definitely the highlight of our careers”, says Kian. “When I got the crowd to sing happy birthday to my late father and then the second year doing my speech and mentioning my dad and looking up to the gods and talking to dad with 85,000 people around me . . . I think the last time we play Croker will be all of that and so much more.” 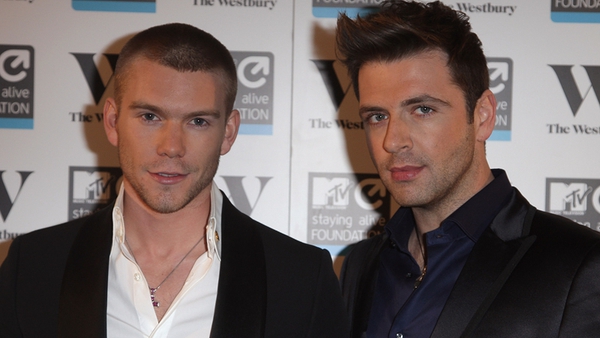