Bono says U2 are under more pressure to make a good album now than they were when they recorded the career-defining Achtung Baby 20 years ago.

Echoing his "we need to dream it all up again" words when U2 played Dublin's Point Theatre on New Year's Eve in 1989, he told The Irish Times: “It’s actually worse for us now than it was when we went to Berlin. We can play the big music in big places. But whether we can play the small music, meaning for the small speakers of the radio or clubs, where people are living, remains to be seen. I think we have to go to that place again if we’re to survive.

“There are so many U2 albums out there. We need a reason for another one. The whole point of being in U2 is that we’re not here to be an art-house band. Our job, as we see it, is to bring the art house to the mainstream; our job is to puncture the mainstream.”

The singer says he sees the future of the music industry in new technology and new formats. “Our last album was the first album to be made available as an app with BlackBerry devices, but it didn’t work: the functionality was not what it could have been,” he says.

“New formats are going to happen. I’m always banging on about this. The app format brings you back to that world of gatefold sleeves, of being able to read lyrics – and being able to play the album at home on your plasma TV.”

Bono also defended the sales performance of the band’s 2009 album, No Line on the Horizon. ”We’re just about to come to five million sales on No Line on The Horizon, and that, these days, is the equivalent of selling 12 million records,” he says. “You can actually do the figures on that. So when you look at it like that, it has the same sales as All That You Can’t Leave Behind.

“People say Get on Your Boots was the wrong single, but it’s great live. Unfortunately in the last few weeks of finishing the album, we didn’t have the objectivity. We figured out Get on Your Boots later, when we were on the road and it became a much better song. I think Unknown Caller is a classic, as is Moment of Surrender.”

U2 release the 20th anniversary edition of Achtung Baby next week. 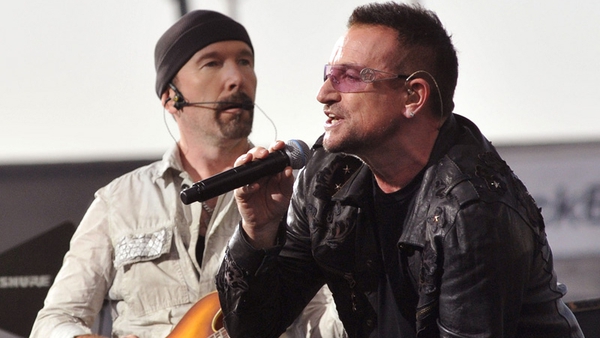 Bono: "Macca slid down our banisters."