On her return to Cong, Co Mayo to mark the 60th anniversary of the making of The Quiet Man, Irish screen great Maureen O'Hara gave an extended interview to RTÉ News' Western Editor Jim Fahy, and you can watch it on RTÉ TEN.

"You have no idea what the film means in the whole world," she tells Fahy. "But you can go to China, you go to Japan, you go to South America, you go to Argentina in particular - where everybody thinks they're Irish - and all they talk about is, 'Oh the film The Quiet Man. Oh tell us this, tell us that, tell us the other'. It was the dream of our life to make it."

O'Hara is then asked if she had a sense that The Quiet Man was a classic when she saw the script, and replies: "We were so thrilled and so excited to be doing a movie in Ireland about Ireland... I couldn't tell you our pride, and also our fear that it wouldn't be shown as we remembered and as we wanted our native land to be shown."

As feisty as ever at 91, she remembers The Quiet Man director John Ford as "an old divil", but describes the filmmaker and co-star John Wayne as "wonderful to work with".

She says the film was, for Ford, "his life" and "what he wanted to leave when he kicked the bucket".

Asked if there was ever a sense that the film was stage Irish or if anything embarrassed her about the film, she replies: "No! Because it wasn't! Where did you get that rubbish?! Honest to God! That it was stage Irish?! Are you going to answer me? No. No, ok? Well, then, I won't nag you anymore."

However, she still refuses to divulge what she said to John Wayne during the famous kissing scene, but adds: "If you had to confess it in confession then you'd never go to confession again!"

You can watch the interview by clicking the link above left. 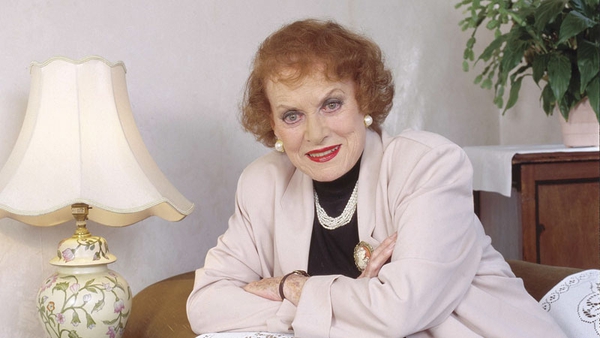