Duo Ell and Nikki won with their song, ‘Running on Scared’ which scored 221 points to win. Their romantic ballad was mentioned as a strong contender but emerged as a surprise winner on the night. The country has competed in the competition since 2008 and this is their first time to win the competition.

In second place was Italy who had a late surge of votes and Sweden came third. Ireland’s Jeward came in a very respectable eight with their song ‘Lipstick’. This was Ireland’s strongest result in the competition in years.

23.20 It's all over and guess what Azerbaijan have won it!

23.17 Just downloaded pics of Azerbaijan and remembered who they are - big hair and all dressed in white looking a bit like Katie Price and Peter Andre back when they were Katie and Peter

23.12 Ah it's Derek Mooney. Good to know I am not the only person in the building! I haven't seen anyone in our little office since 7pm.

23.10 Guess I better go looking for a picture of Azerbaijan hadn't I?

23.09 There is no way this thing is over at 11.20pm. Guess I will be sticking around a bit longer. Am wondering who will be the person delivering the Irish votes?

23.08 Just got six from Portugal which puts us on 93 (perfectly respectable position really)

23.07 I love Malta, actually visited there once on holidays and now will go back!

23.06 Sorry nodded off their briefly, did I miss any votes for Ireland?

23.02 Don't reckon we'll do much better with the Croatians

23.01 Getting annoyed now as are the audience as Marty just pointed out

23.00 Not that kind apparently

22.59 OMG the Georgians are not even pretending

22.57 Ah my French friend finally gets some votes, weren't we told he was one of the favourites?

22.56 The guy from Turkey looks like he should be reading the news

22.48 San Marino is not a place I will be visiting. Anyway I don't know where it is!

22.46 Polish woman is really annoying - you get two minutes on screen and that's your lot love

22.42 Alex Jones is taking a break from The One Show - hopefully to give us some votes

22.41 I take that back - it's fabulous because she gave us eight points

22.40 An unfortunate dress on the lady from Slovakia

22.40 We like the lady from Iceland she gave us some votes, but what has she got on her head?

22.38 A spot of political voting there I reckon and it's not going down well with the locals

22.37 Okay so we are not going to win so now it's all about a respectable mid-table performance so come on the Jeds

22.29 Is it too early to call it? Apparently Blue are big in Bulgaria

22.27 So we will know pretty quickly here I reckon, you always get a sense of it with the first few countries

22.26 Must say using a football stadium was inspired the set is incredible

22.25 We get it - you are multi-talented, you sing, you speak, you lift women. You are an all-around top bloke.

22.24 Alright lads it looks like we are getting to the main action of the night. Come on the boys!

22.16 Must admit I much preferred the interval act from Thursday's semi-final

22.15 It's interval time and the act is some lad called Jan Delay, must admit I have never heard of him and it looks like he has borrowed Dino's jacket from earlier

22.12 We are officially in last chance saloon. Goodnight and good luck!

22.11 Hadn't realised first time round just how much Kim Kardashian hair was on display tonight

22.08 Go on please vote they are lovely lads and yeah they are not the best singers but they can jump really, really high especially John!

22.08 Are they really showing us all the acts again? Come on Europe vote for us to win please!

22.06 One of our commentors has just said the Google predictor is not looking good for us to win! EEK it has Lena way ahead of everyone else with the Jeds in second place miles behind. Say it isn't so!!

22.02 Finest cup of tea I ever had and turns out I'm doing my bit for all things European with my choice of biscuits which it turns out come from Germany - Choco Leibniz and they are damn fine too!

21.56 I may have to revise that fashion non-award to your woman

21.56 I think I really need that cup of tea now. I actually brought a flask which is a flashback to 1988 and I hope it lives up to expectations.

21.54 Okay fashion fail of the night goes to Georgia. Can't hear the song just mesmerised by the dress!

21.50 Actually I must have been distracted by the outfits first time out. It's not great really is it?

21.48 Next up is Serbia and this is a perky tune if memory serves. A little retro but okay 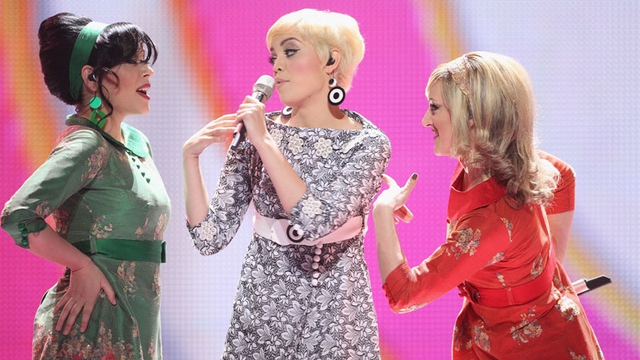 21.47 At least it is a distraction from the song which is like a dirge I'm afraid. I think the hunger is getting to me!

21.46 She is clearly paying homage to Jedward with her extra large shoulders - their's go up, her's go out

21.46 Nearly there now! This is the Ukraine and Mika

21.41 Yup definitely hadn't heard it as I wouldn't forget that and for all the wrong reasons.

21.39 Although I can't resist having a go at their outfits - they all look like Gary Barlow wanntabees!

21.37 Who picked me for this gig? I realise I have absolutely no musical taste, I actually like this one!

21.36 Sad story here as the songwriter had passed away and his friends are singiing the song in memory of him

21.34 That is the most unforgiving frock of the night. The song is a bit predictable but not awful.

21.31 It's Slovenia. Okay what is happening with her dress? 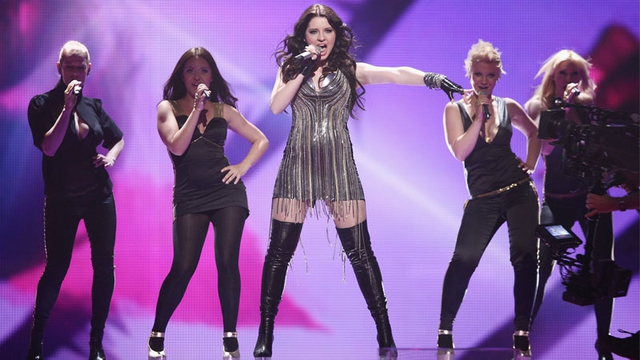 Here's one we took earlier

21.31 It got a fairly good reaction from the crowd so maybe I am missing something.

21.30 That rain will play havoc with their hair

21.28 False alarm it's actually Azerbaijan although you could be mistaken for thinking it is an advert for Daz whiteness!

21.26 Thanks to Sue and Leah in Norway. Great to know someone is reading!

21.23 We're at song 18 already and it's Austria. She looks like she just stepped off from stage from Chicago. There I go with the musical references again!

21.22 This sounds like a Billy Joel track from twenty years ago. Can't see it doing the business.

21.21 Do those women intend doing something with the trumpets? At least I think they are trumpets they won't stand still long enough for me to get a proper look

21.20 It's Romania and those trousers are a punchline in search of a joke

21.12 It's Moldova and they appear to be wearing cones on their head. Sounds like a group of garden gnomes delcaring their independence and perhaps a bid for world domination. Remind me how this qualified from the semis

21.10 I haven't heard this before so maybe it grows on second hearing but for me it was fairly bland

21.09 Add to that the fact that they seem to shop in the same place as Mr France and I am not lovin' their work 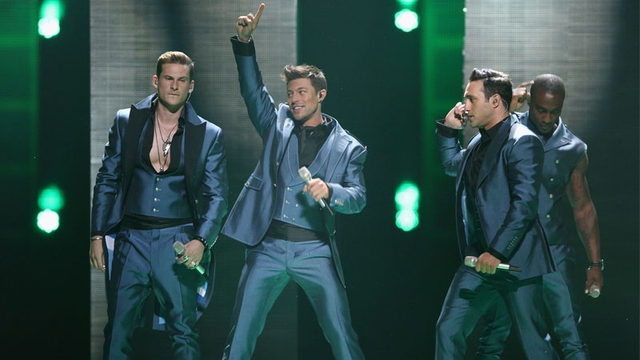 21.08 This time it really is Blue. Have mixed feelings about these lads as they haven't been very nice to those nice boys from Lucan.

21.05 Not a bad tune actually and the graphics is the background are great. She could feature in top five

21.03 Anna from Switzerland is up next

21.03 I'm glad Dino admitted his jacket was a little on the dated side

21.01 Maybe I was a bit harsh, that was a fairly impressive final note!

20.58 Actually not interesting at all, somebody just rang and the local Radisson want their lounge singer back

20.57 The Italians are up next and we haven't seen them in years so this should be interesting

20.56 OMG I feel like standing up and waving a flag but that would be ridiculous as I am alone is a very dark office. My inner-musical fan is awakening!

20.54 Have to say though the outfit makes him look like someone in a crowd scene from Les Miserable! Bring him home....

20.53 Watch out for this guy from France - he's one of the favourites! And he can actually sing which is always an advantage.

20.49 The Russians are up next and this guy is a movie star at home. Graham says he is changing his name to Alex Sparrow to launch himself on an unsuspecting world! And if Graham says it, it must be true.

20.47 Now somebody else is singing, do you think they have been introduced?

20.47 I think this lad thinks he's in another competition

20.45 The cardboard cut-outs look like she did them herself just after she stuck that dress together

20.42 Okay a totally ridiculous outfit and my mother was her curtain tie back please! 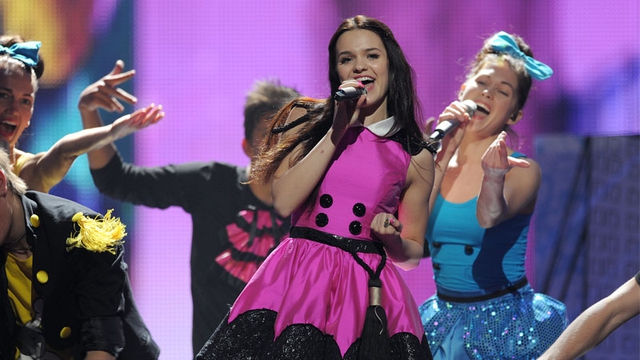 20.41 He's called Eric and he wants to be popular. Not working with me

20.39 Somebody else is singing now. Don't really care that much!

20.37 I do worry for John occasionally as he tends to really lose himself to the music! Sign of a true artist. I have finally learned how to tell the two apart and it turns out John has a slightly wonky front tooth and an ear like an elf. That is according to the pair themselves and I am sure he is even more charming for those two slight blemishes. 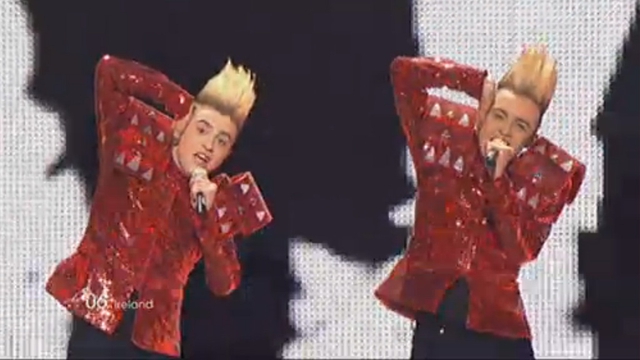 A bit fuzzy but you get the picture!

20.33 Graham reckons they will make you smile so go on try not to!

20.29 Hungary next and this one is apparently poptastic and Graham tells me is Duncan from Blue's favourite. Not sure of his pedigree as an arbiter of taste

20.28 Totally forgettable tune I'm afraid Evelina but the crowd in the room seemed to like it

20.26 It's Lithuania and only two to go until Jedtime! Spent the last two minutes trying to find BBC One on this TV as I thought I'd check in with Graham and see how he is doing!

20.21 It's Denmark next and this is the guy who stole Jedward's hairstyle if memory serves! 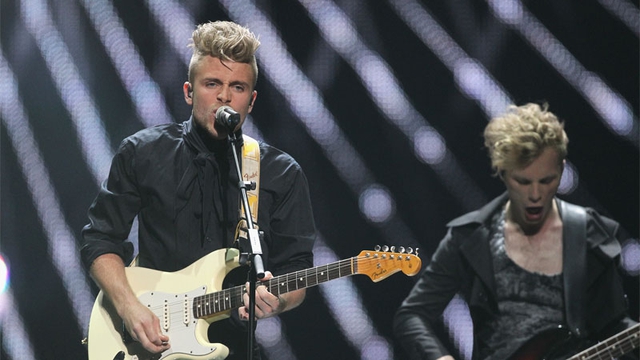 20.18 Next up is Dino for Bosnia & Herzegovina with Love in rewind. Very folksy and think the jacket was a brave choice. As for her dress well let's not go there.

20.16 A great roar from the crowd. Not a bad opener and Marty seems happy!

20.13 First up is Finland. One man and his guitar. Did he borrow his mammy's blouse?

20.11 So the voting lines are open and we cannot vote for ourselves. Everything crossed everyone!

20.07 We are totally opposed to any activity that might give an advantage to another country so off the stage Lena

20.06 Correct me if I'm wrong but the girls may have been miming!

20.03 Have we crashed in on The X Factor auditions here? Somebody should have shouted no don't do it!

20.01 The lad and lasses are all dressed up for the occasion. Not sure about the red frock, she looks like she cannot move.

20.00 And they're off. Oh joy Marty's dulcet tones and tonight he doesn't sound like he is talking to us from a cave.

19.50 I do love seeing people spin that wheel but I wish they would get a move on.

19.45 Just 15 minutes to go now to kick-off and we reckon Marty and Graham are doing their vocal warm-ups as we speak. Personally I have been practising my typing all day and am poised for action. Bring it on! 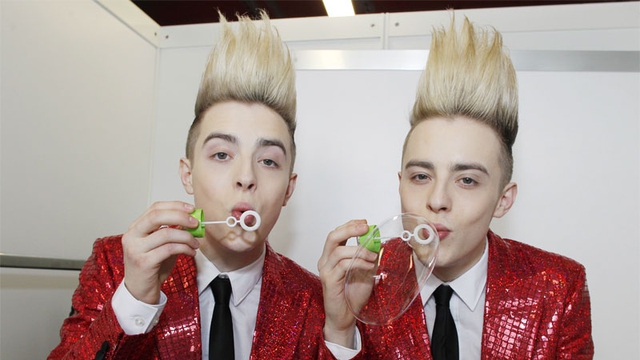 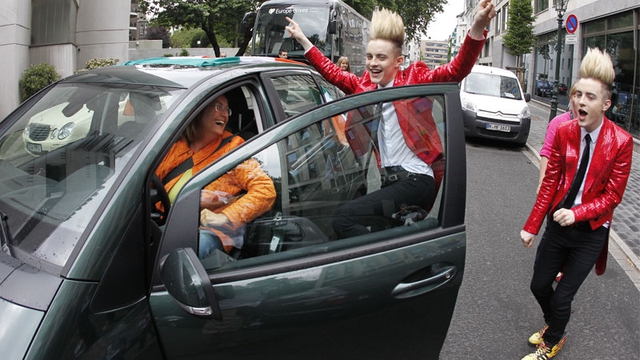