When Pierce Brosnan became an ambassador for the new National Academy of Dramatic Art, he was championing two loves in his life: Ireland and acting. Donal O'Donogue spoke to him

“Prayer helped me in those moments in time”, says Pierce Brosnan. “It helped me with the loss of my wife to cancer and with a child who had fallen on tough times. Now prayer helps me to be a father, to be an actor and to be a man. It always helps to have a bit of prayer in your back pocket. At the end of the day, you have to have something and for me that is God, Jesus, my Catholic upbringing, my faith. You have to be as kind as you can be to yourself and to other people. And you have to live life as boldly as you can.”

Brosnan is at his home in Malibu, overlooking the Pacific Ocean, where he lives with his wife Keely. “It’s glorious here”, he says in his distinctive breathy, cut-glass accent. In the background, the birds are singing. In the foreground, a glass clinks as the actor sips a pre-lunch drink. It’s the first day of the 31st Dáil and the Navan man is curious about the old sod. “It’s historic but they have a historical problem on their hands too”, he says. “But there is one thing that the people of Ireland know how to do and that is to survive. You have to keep your faith and stay optimistic.”

Brosnan could be describing his own life and career. The bullet points are bold: born in Navan, raised in London, famous on TV for Remington Steele, famous everywhere else for James Bond, and defying easy categorisation with his roles in The Matador (Brosnan jokes!), Mamma Mia! (Brosnan sings!) and Seraphim Falls (Brosnan slices open a guy’s belly!). “You are constantly reconstructing yourself”, he says. “In a way it all leads back to a little boy in Navan, my home town on the banks of the Boyne. Sometimes, it has been painted in melodramatic tones but it was a fantastic way to be brought up. The Catholicism and the Christian brothers, those are deep-rooted images and the foundation for a person of some acting skill.”

Brosnan can be a mannered interviewee, as if reading from some prepared script. It probably didn’t help that a list of questions was requested in advance. His people also mailed an image: a portrait of the actor as a very sexy man, looking incredibly fresh for his 57 years. But when the actor loosens up – as he does when talking about the time he and Quentin Tarantino discussed making a Bond movie together – he’s effortlessly warm. If at times his talk of the old country sounds like a barrel of blarney, Brosnan puts his money where his mouth is.

Recently, he became the first high-profile figure to support The Lir, Ireland’s National Academy of Dramatic Art, which opens its doors this autumn in Trinity College. “I was honoured first of all and it was a win-win situation”, he says of the request to become an ambassador and patron. “I have travelled far and wide and made my home in America but I bring Ireland with me and this is a way of having it closer. I also believe that when you have an academy like this it will foster only good things. From harsh times we sometimes get the best art.”

Pierce Brosnan was 12 years old when he first arrived in London to be with his mother, May (his father left when he was 2). That was August 12, 1964, the same day that Ian Fleming, creator of James Bond, died. In another twist of fate – or myth-making – the first movie that Brosnan saw in London was Goldfinger. Movies became a refuge: “a keyhole into another life.” He idolised the marquee stars like Marlon Brando and Spencer Tracy, and read Hemingway and Steinbeck. “I remember when I first discovered those writers because the education was so fecking miserable”, he says.

School was a monstrous comprehensive in Putney. Of the 2,000 or so students, Brosnan reckons he was the only Irish kid. So he was picked on. But he fought back. “I found my own uniqueness there through fighting against those that picked on me”, he says. “But fighting can get really tiring.” He abandoned school at 16. “I was free of the lot of them”, he says. “Free of that crazy madhouse of a school.” With a lean education, he set out to become a commercial artist. “I left school with a little cardboard folder that had all my drawings and paintings”, he says. “That was my passport out. I found a little studio in Putney. I made cups of tea, watered the spider plants and drew straight lines and circles for a couple of years. Then I found the Oval House Theatre.”

He attended workshops there. “I was so naïve that I thought this meant carpentry or wallpapering”, he says. He learned his craft, formed his own theatre company and called himself an actor. “But I really didn’t own it until I went to the Drama Centre and trained”, he says. He was cast in a Tennessee Williams play where his acting impressed the legendary playwright. He sent me a telegram. It said: ‘Thank God for you dear boy, love Tennessee Williams’.” That framed telegram now hangs proudly in his Malibu home. He met and fell in love with Cassie Harris, who was to become his muse and wife and mother to his first child, Sean. When she died in 1991 of ovarian cancer, he was grief-stricken but found solace in his faith.

By then, Brosnan had made his name as TV’s Remington Steele, a character so smooth he didn’t need a personality. Steele was the small screen James Bond: debonair, dashing and someone who always got his man, and his woman. Back then, with Roger Moore running out of eyebrows to raise, it seemed inevitable that Brosnan would get the 007 licence. In 1986, he screen-tested for the part but Remington Steele reclaimed him for six more shows. He eventually became Bond with Goldeneye (1995) and reprised the role three times.

He downplays the producers’ decision that ended his days as Bond. “Barbara [Broccoli] and Michael [G Wilson], bless their hearts, have their own way of doing it”, he says. “At the end of the day, what they say, goes.” But he had plans for a fifth Bond. He and Quentin Tarantino discussed the idea in a Beverly Hills hotel over cocktails. Lots of them. “I couldn’t find my feet afterwards and could just about get out of the hotel”, he says. “Quentin had spent the day celebrating Kill Bill 2. So when he arrived he just waxed lyrical about the movies and what he wanted to do with Bond. Luckily I had a driver. Even more luckily it wasn’t Quentin! But nothing came of it.”

After Bond, Brosnan confounded his critics with a virtuoso performance as a foul-mouthed, washed-out hit-man in The Matador (his tipsy waddle through a hotel lobby wearing nothing but a pair of black underpants and boots is an irreverent hoot). “Little gems like that don’t come around that often”, he says. But he hit pay-dirt again with the allegorical western, Seraphim Falls and delivered another powerful performance as a slippery ex-Prime Minister in The Ghost Writer, “(Director) Polanski was wonderful to work for”, he says of the latter. “It’s electric when you’re with him. And he has his own way of barking so you have to be thick-skinned. But if you give as good as you get and you have your reasons for doing something, it’s OK.”

Despite the Christian Brothers in Navan, Brosnan never let go of his religion. “God has been good to me”, he says. “My faith has been good to me in the moments of deepest suffering, doubt and fear. It is a constant, the language of prayer. It teaches you tolerance of the person that you are and tolerance of the situation that you are in. You try to rise to higher ground. I might not have got my sums right from the Christian Brothers or might not have got the greatest learning of literature from them but I certainly got a strapping amount of faith.”

A few years back, his son Sean was involved in a horrific crash on the Pacific Coast Highway. He remembers that time vividly: the late-night phone call, the frantic dash down the same highway. “I thank God to this day that Sean is still with me and still healthy and still writing his poetry”, he says. He counts himself a lucky man. “I still love acting and I’m still lucky to be at the table.” He still paints, bright swirling canvases with more than a nod in the direction of Matisse (“I steal from him” he admits). Painting gives him peace and he regularly works while on location, the canvas bridging the distance to his home and his family.

Last St Patrick’s Day, Brosnan participated in an Irish event at UCLA where he read WB Yeats’ politically-charged poem, Easter 1916. “Why did you say ‘interesting’, when I mentioned that poem?” he asks. Curious. He has a number of projects simmering with his company, Irish Dream Time, including the film St Vincent, in which he plays a hit-man who becomes a priest. “You have to stay hungry and that goes right through to the age of 57”, he says. “You can’t be complacent about what you do and even more so as a middle-aged man. I remember one time six years ago when I was with Stephen Rea and nursing a pint of Guinness in Vancouver. We were just sitting there, quietly, not a word. And Rea, with that face of his and that delivery, goes: ‘Well . . . this is what we do’.”

* For further information on The Lir go to www.thelir.ie 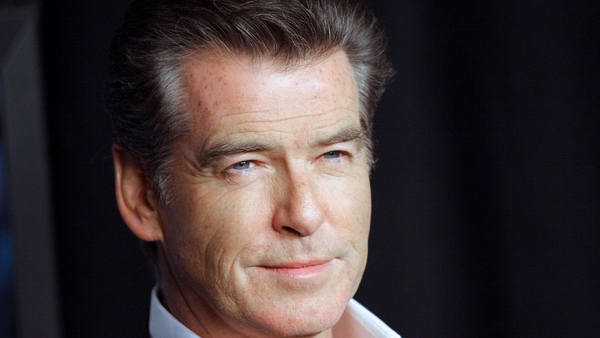