'Grey's Anatomy' star Katherine Heigl wowed film audiences in 'Knocked Up'. She talks about new feature '27 Dresses', her plans for the future, and the wisdom of Dr Phil...

Click here for a chance to win '27 Dresses' merchandise.

Q: What appealed to you about Jane, your character in '27 Dresses'?
Katherine Heigl: What I like about Jane is that she is the sort of woman whom everybody identifies with, in the sense that she's always taking care of everybody and putting their lives before her own but at the same time, she still has a lot of edgy, witty humor and can see the fun in all kinds of situations.

The banter that goes on between her and Kevin (Jimmy Marsden) reinforces the idea that this woman has a lot of intelligence even though she's a bit of a "yes ma'am" kind of girl. She is still really clever and funny and interesting. She is very quick-witted which is interesting because you don't expect it from her at first.

Q: Can you talk about the story and what happens?
KH: To the audience, she will come across as a girl who’s not going out there and grabbing the life that she wants or even getting close to approaching it. She has been madly in love with this man from afar for years and has also been catering to her family since her mother died and there is a real innocence to Jane.

She allows people to take advantage of her, but she willingly puts herself in that position. You would think that she would be a doormat or more of a wallflower, but she's actually not. She's, funny and strong and likeable in her own right.

Q: So how do you portray her?
KH: She is full of contradictions and so is interesting to portray. We flashback to a wedding scene in the beginning, in which she's a young girl and suddenly her true calling comes to light; she's very good at being a bridesmaid. And she's always been rewarded with praise and love and attention because of the fact that she's great at taking care of things and taking care of people.

Q: How real is she to you?
KH: There are so many people like Jane, who put themselves in a position in which people can override them and expect them to take care of everything. At first it looks as though Jane is a victim but she's actually not at all. She has inadvertently orchestrated this whole thing.

She is responsible for the way that people are treating her, and to quote the great guru Dr Phil, you teach people how to treat you!

Q: What was it like working with Ed Burns, who plays George, (object of Jane's affections but who falls for her sister Tess)?

KH: I am a huge admirer and he’s been amazing to work with. He's just got a very down-to-earth, laid back personality and he's one of the easiest people to be around, as far as actors go. I think we all get used to the more neurotic, self-conscious, cerebral actors and he's not like that at all. He's just Ed. He is funny and charming and wonderful, and my fiancé loves him too, so he has become a new close friend.

Q: And what about James Marsden, who plays Kevin (the cynical journalist who sees a good news story in Jane's life)?
KH: Jimmy's got the kind of sense of humor I love. He's just really quick-witted, smart, and really, really funny. And it's just a joy to be around him, you are literally laughing every five seconds and he's perfect for this part, because there is a lot of Jimmy in the character I think.

Q: So, are you a romantic yourself like Jane?
KH: I am, but I think Kevin’s cynical approach to weddings and romance is quite common these days. People say "What’s the point, when there is so much divorce? What’s important about the actual marriage license?"

I think marriage is great because of the idea of committing to somebody in front of all the people you love most in the world and celebrating the love you have for one another. I like the idea of tradition and the party and the idea that two people are willing to take that chance on one another. So, I think it's a fairly emotional thing.

Q: What is it like working with Malin Akerman as your sister?
KH: Malin is a dream. There's always a little bit of hesitation when you're walking onto a set with another female actress, because this is an industry that breeds a lot of competition and a lot of sort of resentment and jealousy and all of those things. But it was fantastic with Malin. She was immediately delightful and charming and mellow and you could sense that she wasn't putting on an act. She is just who she is - accepting and loving towards everyone and she’s got a great sense of humor.

Q: Can you discuss your specific on screen relationship with Tess and how it evolved?
KH: I think that when she looks at Tess, Jane sees that little girl whose mother died when she was just a kid. She makes excuses and allowances for her sister, who doesn’t have realistic view on how the world works and thinks everything should revolve around her. Jane has a lot of patience and compassion and that's why Tess is the way she is. I mean, the reality is that Jane is culpable for her own situation. She lacks courage to stand up for herself.  I don’t think Tess is mean-spirited, she just doesn't know any better.

Q: You are doing a lot of comedy at the moment – Knocked Up and now 27 Dresses - is this your forte?

KH: I enjoy comedy but I think I am funnier in this film than in 'Knocked Up' actually. I was more of the straight guy in that film. This is a real opportunity for me to unleash a new side of myself and my comedy, that I haven't really done much of before. I have a tendency to get a little 'shticky' and to go a bit too far, because I love it and it's really fun for me to ham it up and really hit the comedic moments hard.

I have to watch it a little bit and rein myself in and pull back into a realm of realistic humor. That is my challenge and I love it; I have to really imagine putting myself in Jane’s position. But I have always, always loved comedy - this is a dream come true for me. I have been waiting, I'd say, 17 years, to play a role like this.”

Q: 17 years? So you wanted to do this as a child.....
KH: I did - even when I was little, all I wanted to do was make romantic comedies. I wanted to be 'that girl', the central character in a 'rom com' and be given the opportunity to be funny in a film with a happy ending and the whole thing. Those are the movies I go and see. I don’t really enjoy the very intense dramas because they depress me for months. I just want to laugh and have a good time at the movies. Give me the chance and I will be doing pratfalls and falling into pies and slipping on banana peels.

I've had moments here and there on 'Grey's Anatomy', every once and a while we get those sort of scenes where we get to banter and the same is true of 'Knocked Up'; there were good comedic moments where I got the chance to unleash it. But this is it for me on this movie. I love it: being funny 24/7 in every scene. It's pretty exciting.

Q: What are the dresses that you have to wear like?

KH: Well, when I first saw them I thought, 'You guys are taking it too far'. I really didn’t believe that anybody would ask their bridesmaids to wear dresses like this! Then they told me that these are real bridesmaids' dresses. I was shocked and appalled! The one time that I was in a wedding for one of my really good friends, I loved my bridesmaid's dress. It was just simple and navy blue. Delightful. But on this film, the dresses are really outrageous: crazy, ugly, hideous dresses!

They told me that, "yes, these weddings do happen". They have seen pictures and have heard about underwater weddings.

Q: How thrilling is it for you to be considered a leading comic actress of your generation? There are comparisons to Cameron Diaz and Sandra Bullock?
KH: I'm terrified! I can’t think about that sort of thing, it is pretty hard to wrap my brain around compliments like that. There are so many wonderful actresses right now who are really talented comedically. I don’t feel a lot of pressure and I just enjoy it all, it is exciting. Also I have been acting for a long time. I feel like I have just been doing this forever. I am just glad I am working, because I have had times when I have not worked.

I love what I do for a living. Everything about it is so familiar to me, showing up on a set, all the cables on the ground, the camera crews, the lighting, you know, the hair and makeup. It is so much a part of my world that I don't really step back at all and think, "wow, this is an amazing time in my life". It just seems normal.

Q: How do you take care of yourself?
KH: In the last year, I got really committed to a workout regime and diet and eating well. But I have to tell you that my trainer Harvey Pasternak keeps telling me that the program I follow is not a diet. It's just a way of eating healthily, a way of life. I follow his 5-Factor Diet.

The producers introduced me to him on 'Knocked Up' and he’s just an unbelievably cool guy; he makes the programme pretty easy. I can't do anything that's too extreme though; I would never stick to a diet. I love food, I love to go out for great dinners and I hate working out. I really hate it. So, the most I'll do is about 45 minutes in the gym, three times a week.”

Q: What are your goals?
KH: I really want to get into producing. I read a lot of novels and I feel like there are so many amazing stories to tell. And I'd love to be there at the inception of a project, right from the beginning. So we’ll see. I want to stay in the moment and enjoy the great things that are happening in my life and hope it continues this way. That would be nice. 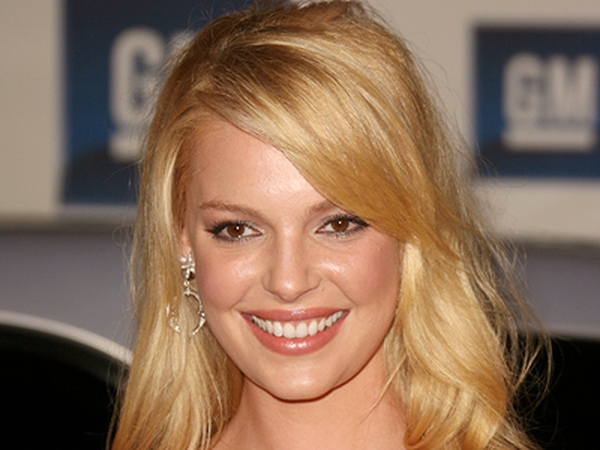