Analysis: The last British General Election, prior to 1918, had been fought in 1910. But this one was significantly different.

The voting had failed to produce a clear majority, and the Liberals ruled with the support of the Irish Parliamentary Party. While John Redmond supported Herbert Asquith’s social reform legislation, the return was the successful passage of the Irish Home Rule Bill. The 1910 election, or so it seemed, had ushered in a new era of Anglo-Irish relations that would see Ireland establish itself as an independent state.

Events, however, changed everything.

The outbreak of the First World War, which began in 1914, would lead to the suspension of Home Rule. Added to that the outbreak of rebellion in Dublin in 1916, and it appeared that any resolution of the Irish Question was as far away as it had ever been.

With the ending of hostilities against Germany on 11 November 1918, the British Parliament was quickly dissolved to allow for a fresh General Election. It was announced that the parliament, which had sat since 1910, would be ended on 25 November and elections held on 14 December.

The General Election of 1918 offered millions of men and women the first opportunity of their lives to vote. Prior to the election, and as a recognition of the efforts and sufferings of the population during the war, the Representation of the People Act had been passed. This meant that Britain’s restrictive franchise for men was ended. All men over 21, irrespective of their wealth or property ownership, were eligible to vote. Additionally, all women over the age of 30, residing in property with a rateable value of over £5, were also eligible to vote. The net result of these changes was that the electorate grew from 5 million to 21 million people. 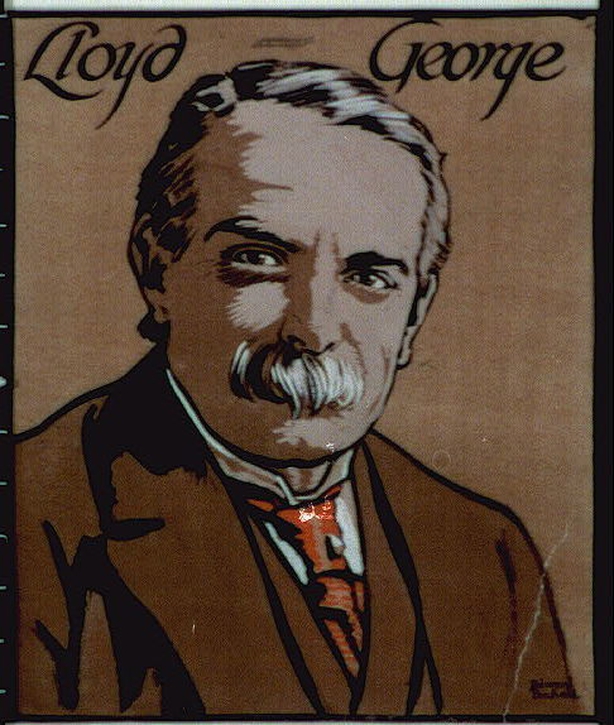 The new voters were not offered a straightforward electoral choice between either a Liberal or Conservative government.

The Liberal party had split on the issue of leadership in 1915.

While David Lloyd George was the incumbent Prime Minister, who had led Britain through the second half of the war, he was not the leader of the party.

In essence the Liberal party had split into two wings in 1915. The first, led by Lloyd George, had partnered with the Conservative party to govern the country, while the remainder, led by Asquith had chosen to sit on the opposition benches. This split was replicated in the 1918 election.

Lloyd George’s Liberals and Bonar Law’s Conservative party formed a pre-election coalition where they agreed to support each other’s candidates in the election.

The system meant that the wartime coalition won a massive majority.

The Conservatives took 382 seats (including 35 Unionists) and Lloyd George’s Liberals 127. The scale of the victory was signified by the fact, although revolutionary in Irish political terms, the third biggest party returned to parliament was Sinn Fein with 73 seats. The Labour Party polled fourth with 57 seats, while the Asquith led Liberals were effectively destroyed managing to hold only 36 seats.

The result, despite the wider franchise in 1918 was not, with the exception of the Sinn Fein result in Ireland, a radical swing to the left or the centre (as would happen after the end of World War Two). It was, in the British case, a vote for a continuation of the wartime coalition: Lloyd George as its mercurial Prime Minister, but in numbers at least, a solidly Conservative government.

So, what did the results in the election mean for Ireland?

In the rush from armistice to election in the late months of 1918 it is clear from campaign speeches that the question of what to do about Ireland and the stalled Home Rule question was not central to Lloyd George’s thinking. Rebuilding Britain and honouring wartime sacrifices were key to his agenda.

But would the scale of the Sinn Fein victory and the annihilation of the Irish Parliamentary party force the Irish question back onto the table?

It appeared from an Irish perspective, given Sinn Fein’s rhetoric and their abstentionist approach to the London parliament, that a simple revisiting of the Home Rule Act would not be suffice. However, given the scale of the Conservative victory in terms of seats in 1918, which included the Unionists, there was no way in which the latter party would allow any Republican driven clean break for Ireland.

In his book Irish War of Independence, the historian Michael Hopkinson defined the British government’s attitude toward Ireland, despite the scale of the Sinn Fein gains, as ‘rudderless and confused’.

London was too overly concerned with settling the map of Europe and the scale of reparations it would receive from Germany at the Paris Peace Conference to be focused on Ireland. The demands of tens of thousands of returning troops from the Western Front, plus the reorganisation of the British economy back to a peace time footing also meant that Irish issues seemed at best a distraction rather than a pressing concern.

Lloyd George in particular, given the cost of World War One in terms of the dead and injured, was motivated to change society to benefit those who had paid the highest cost in fighting Germany. His government oversaw radical legislation in the areas of education, house building, wage controls, health expenditure and access to health insurance, and a doubling of the old age pension.

In many ways the government of 1918-22 was the most innovative, in terms of social welfare legislation, of any British government prior to that of Clement Atlee from 1945. But, despite this reform programme that dominated Lloyd George’s thinking, as well as foreign policy distractions such as war in post-revolutionary Russia, as his government was dominated by Unionist supporting Conservatives, there was little in the way of a fresh perspective (or indeed attention paid) as to the next step forward for Ireland.

In effect the 1918 election result in Britain meant that no matter the political colouring of the Prime Minister, Sinn Fein and its aspirations for the establishment of an Irish Republic was facing an intractable government. As a whole that government was little changed in personnel from the War years of total government, and policy innovation on Irish matters would not be forthcoming.

The Irish voices in government were the voices of Unionism. Despite the opening of Dáil Eireann in Dublin in early 1919, and the start of military hostilities between the British and Irish, it would take until the late months of 1919 before the British government made a legislative move in the realm of Irish affairs.

The 1918 election was in so many ways, in terms of who could vote and how they voted in Ireland, revolutionary.

What it meant for Ireland, given Lloyd George’s bigger social policy agenda and the demands of the Paris Peace Conference, was a side-lined place in British government thinking. This would mean, once more, that it would be events in Ireland that would come to dictate British responses rather than an engaged and planned policy managed from London.