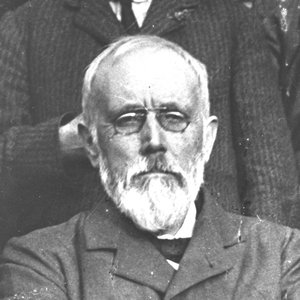 Profile: John Dillon led a party heading for electoral oblivion between March and December 1918. Home Rulers were among the biggest losers in the 1918 General Election.

Having taken approximately three-quarters of the Irish seats at every Westminster election going back to 1885, the Irish Parliamentary Party (IPP) were the dominant force in Irish politics going into the elections. John Redmond led the IPP for eighteen years but he died suddenly and unexpectedly on 6 March 1918 following an operation for gallstones.

John Dillon, who had in many ways always been the power behind Redmond’s throne, took over the leadership of the Party.

Dillon’s background and outlook were fundamentally different from Redmond’s on many issues.
Dillon’s father, John Blake Dillon, was a leading Young Irelander and the young John Dillon was tutored in his youth by James Stephens later founder of the Fenian Brotherhood.

In 1880, John Mallon, Ireland’s most famed detective believed that Dillon was ‘really a cool Fenian, trusted by the American branch’.  Dillon was no stranger to prison throughout the land agitation of the 1880s and beyond. A former chief secretary later referred to Dillon as ‘a pure Agrarian sore-head’ and even his wife once complained that her husband’s policy was to ‘"fill up the gaols" – but he does not explain what is to happen after that.’

On the First World War, John Dillon’s biographer notes how he was ‘entirely unmoved by war hysteria’.
Dillon’s views on the origins of the war differed profoundly from those of Redmond. To his close friend and party colleague T. P. O’Connor, he wrote on 5 August 1914 that ‘the world is now reaping the bitter harvest of the Triple Entente and Grey’s foreign policy which for years I have denounced to deaf ears.’ Dillon did not throw himself into recruiting with the enthusiasm shown by Redmond and others.

Skipping forward to the 1916 Rising, while Redmond took a softly-softly approach in interceding with the Prime Minister, Dillon precariously stuck his neck out in the House of Commons showing just how far he stood from Redmond in his attitude towards the rebels. Dillon evoked cries of ‘shame’ when he told a hostile chamber:

"I declare most solemnly, and I am not ashamed to say it in the House of Commons, that I am proud of these men. They were foolish; they were misled ... I say I am proud of their courage, and, if you were not so dense and so stupid, as some of you English people are, you could have had these men fighting for you, and they are men worth having."

By June 1916, Robert Cecil, then Minister for Blockade, reflected in a private memorandum that ‘Mr Dillon remains in my judgement what he has always been – a convicted enemy of this country.’

One overlooked issue in the period between Rising and General Election is that five of the ten by-elections held in Ireland were won by the IPP.

In response to the attempted imposition of conscription in Ireland in April 1918, Dillon briefly joined a pan-nationalist alliance with, among others, Sinn Féin and even copied the Sinn Féin tactic of abstention, pulling his party out of the House of Commons until July in protest at the government’s abortive Irish conscription policy.

When it came to the General Election in December 1918, a partial electoral pact between Sinn Féin and the IPP in Ulster can be seen to account for some of the very few contests won by the IPP.
Brokered by Bishop McHugh of Derry the pact ensured that key seats did not go to Unionists through the splitting of the nationalist vote.

When the pact was mooted in November, Joseph Devlin admitted to Dillon that, without it, ‘I am quite certain we will not win a single seat in the North, except West Belfast.’

Sinn Féin fielded some of its star candidates in multiple constituencies in the 1918 General Election.
Most notably, de Valera stood in four different contests.

In Clare East he ran unopposed as the incumbent who had trounced the IPP candidate with more than two-thirds of the vote in the July 1917 by-election. Meanwhile, as the senior surviving commandant of the Rising, he was pitted against both Dillon in Mayo East and Devlin in the newly redrawn constituency of Belfast Falls (previously Belfast West). In Belfast, de Valera suffered a crushing defeat to Devlin (8488 to 3245).
However, in Mayo East, the IPP leader lost his seat to de Valera 8975 to 4514. Dillon’s loss cannot just be blamed on a new and expanded electorate. In Mayo East there had only been one electoral contest (in 1892) since John Dillon had first taken the seat unopposed in 1885.

It should not be forgotten that the scale of the IPP’s 1918 defeat was exaggerated by the first past the post system.

More than one in five votes went to an IPP candidate. In nationwide result was 46.9% for Sinn Féin, 25.3% for Unionists, and 21.7% for the IPP. However, behind this statistic is the damning fact that Dillon’s party did not even field a candidate in twenty-five of Ireland’s 103 constituencies.

Dillon, the radical constitutionalist, presided over an inglorious end to the once dominant party and observed from the sidelines the various political developments in Ireland in the subsequent decade up to his death in 1927.

Dr Conor Mulvagh is Lecturer in Irish History at UCD

Dr Conor Mulvagh is Lecturer in Irish History at UCD