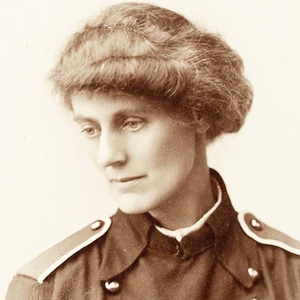 Analysis: Dr. Leanne Lane examines the extraordinary political trajectory of Constance Markievicz, a revolutionary woman in every sense of the word.

Women were permitted to stand for election under the Parliament (Qualification of Women) Act which was granted royal assent on 21 November 1918, a week after the general election was called.

Of the seventeen women candidates who campaigned across the United Kingdom only Countess Constance Markievicz was successfully elected.

Markievicz was decisively elected as the Sinn Féin candidate for the St Patrick’s Ward in Dublin, defeating the Irish Parliamentary candidate, William Field, by 7,835 votes to 3,752.

Analysing the results of the election, a number of papers noted the lack of time that women faced to be ‘formally acknowledged and to establish themselves with the electors’. However, Irish women campaigned in a very different environment to women elsewhere in the United Kingdom and from June 1918 Cumann na d’Teachtaire, the Sinn Féin League of Female Delegates, were planning for future local government and parliamentary elections.

Markeivicz was in Holloway prison during the election campaign, having been arrested, along with other key figures of Sinn Féin, on 17 May 1918 on the government-manufactured allegation of conspiring with the German enemy. This round-up of Sinn Féin leaders followed the failed attempt to introduce conscription in Ireland in April of that year.

As an internee Markievicz faced the issue of censorship of mail in and out of the prison. However, she did not see this as hindering her campaign. On 5 December 1918 the Irish Independent paraphrased a letter she wrote to Jennie Wyse Power in which she stated ‘that it did not matter that she was not able to write to the people of Dublin as they knew her so well’. Indeed, she declared her prison address ‘will make an excellent election address’.

Markievicz, as the first woman elected to the House of Commons, had the advantage of a strong republican pedigree.

Born into the Gore-Booth family with a landed estate at Lissadell House in County Sligo, Markievicz in many respects transcended her family background and the politics associated with that class. A member of the Irish Citizen Army, she was second in command to Michael Mallin in Stephen’s Green in 1916.  She was sentenced to death along with the other officers of the rebellion, her sentence commuted to life imprisonment consequent on her gender. Her bona-fide republican credentials were augmented by jail time.

After 1916 she was incarcerated in Kilmainham and Mountjoy before being transferred to Aylesbury prison in England. Moreover, her work during the 1913 Lockout on behalf of the families of striking workers had endeared her to many. In short, she had that visibility that other female candidates for the most part lacked. Even Christabel Pankhurst, one of the founding members of the militant suffrage society the Women’s Social and Political Union failed to get elected.

Markievcz operated in an Irish political climate that after the 1916 rising witnessed a whole-scale shift in public opinion in favour of a republican solution to the Irish national question. Such a political environment, coupled with her own republican profile, created a set of unique circumstances allowing her to triumph. Meg Connery, writing to the Irish Independent on behalf of the Irish Women’s Franchise League, described Markievicz as ‘one of the most truly beloved and revered figures of contemporary Ireland’.

From RTÉ Radio 1's History Show, Lindie Naughton on Markievicz: A Most Outrageous Rebel, her biography of the first woman elected to the British parliament

By contrast, Winifred Carney’s programme for a workers’ republic found no traction in Belfast. Sinn Féin was not interested in proposing female candidates and Cumann na Teachtaire encountered much opposition from its male leadership.

Markievicz, as a parliamentary candidate for Sinn Féin, pledged not to take her seat in the House of Commons.

When the first Dáil Éireann met on 19 January 1919 she, still in prison, was elected Minister for Labour.

Yet, despite being the first woman in the United Kingdom to be elected and to hold cabinet status, albeit in what the British government declared an illegal assembly, Markievcz operated in a political climate which deemed her lesser or politically suspect on the basis of her gender.

Her election was open to a questioning and a scrutiny that was not meted out to the successful male Sinn Féin candidates.

There was criticism of her success in newspapers such as the Irish Independent. Her election, her detractors stated, further placed ‘her on a pedestal’. This gendered treatment of Markievicz’s election to parliament provoked a venomous defence from Connery. She asked whether the paper was ‘so serenely satisfied’ with the ‘mental balance’ of the newly elected male Sinn Féin MPs that it could go ‘out of its way to subject the solitary woman’ to its ‘journalistic microscope’.

Or was this attack on Marckievcz, Connery wrote’, ‘the old anti-feminist virus cropping up in a new form’.

Dr Leeann Lane is a lecturer in the School of History and Geography, Dublin City University

Dr Leeann Lane is a lecturer in the School of History and Geography, Dublin City University