Many in Ireland enjoyed a warm and pleasant Easter Bank Holiday weekend with maximum temperatures reaching into the twenties across much of the country.

But what caused the warm weather and can we expect more warm Easters into the future?

As we know we get very changeable weather in Ireland. Because of the way the sun heats our planet, combined with the rotation of the Earth, global weather patterns are established. As a result Ireland finds its weather predominately influenced by Atlantic systems moving in from the West, South-West, which leads to our highly variable weather.

(A video of these global circulation patterns can be found here. Notice the number of weather systems Ireland experiences compared to other parts of the world.)

A meteorological analysis of the Easter weekend would tell us that "a high pressure system centred over Scandinavia, kept a complex area of low pressure in the mid-Atlantic at bay and was also the source of the slack mild airflow over Ireland". But in short, it was largely just the luck of the draw that the sunny weather happened to land on the Bank Holiday weekend. 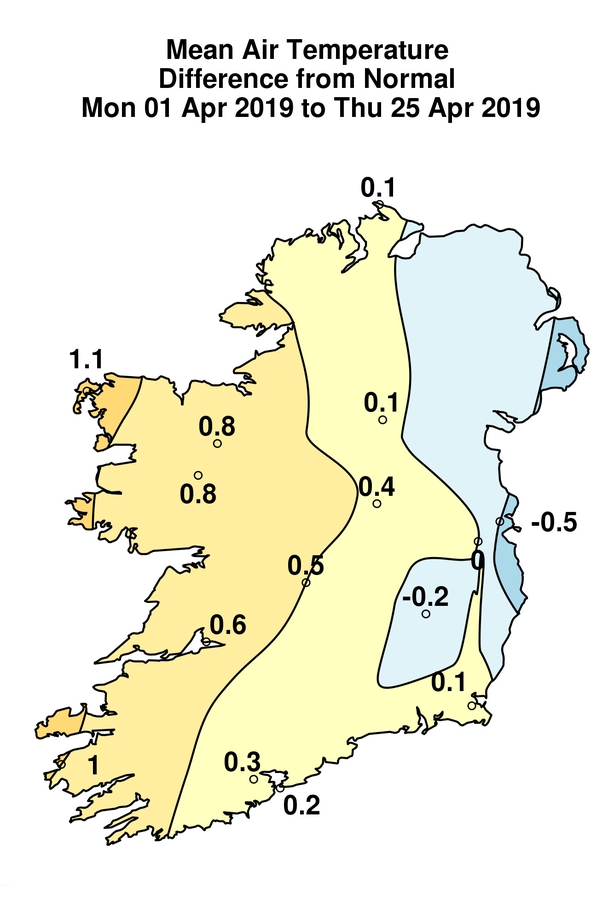 But was this Easter much warmer than normal? Well to answer this we have to understand what Met Éireann and other weather and climate organisations around the world mean by ‘normal’. If ‘weather’ is the current behaviour of the atmosphere and ‘climate’ is the average of weather of a place over a period of many years, the longer the better, then ‘normal’ is the average of the weather over a fixed period of time, usually the last three decades. So when Met Éireann talk about normal conditions it typically means the average weather conditions of the 30 years between 1981 to 2010. So when we compare the Easter Bank Holiday weekend (Friday 19 – Monday 22 April) temperatures in this context, we see that temperatures were of the order of 2-5oC above normal for mid-April.

However, when you combine these warm temperatures along with the other colder temperatures experienced in April to date, there isn’t anything remarkable about the month. This again highlights the significant variability in Irish weather. 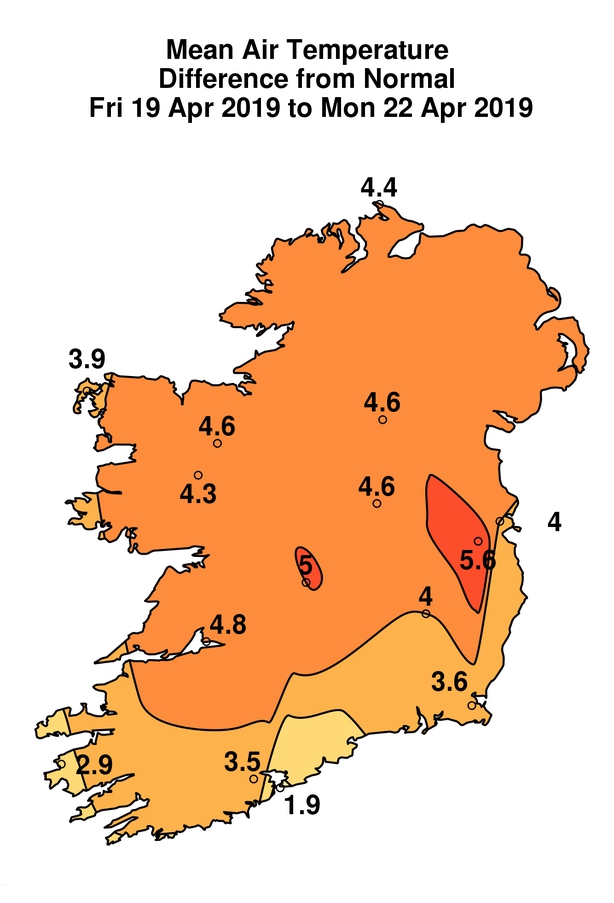 Leading world organisations including the World Meteorological Organisation (WMO) and the Intergovernmental Panel on Climate Change (IPCC), among others, continuously publish reports updating us on the state of global climate. At the global level the planet has warmed about 1oC above pre-industrial levels, with the last four years being the warmest on record (2016 was the warmest). Met Éireann’s weather measurements, taken by dedicated observers for well over hundred years, show a similar warming trend for Ireland. 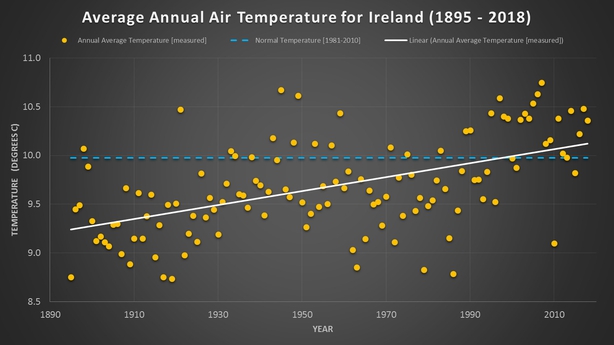 This scientific graphic shows the average annual temperatures for Ireland (orange circles). Notice the significant variation in temperatures each year.

The white line shows that the trend in temperature is increasing over this time period (1895 – 2018). If we compare the start and end of the white trend line, we can see that the average temperature for Ireland has increased by about 1oC, which is similar to that experienced globally.

It is this knowledge of the past climate that helps climatologists predict our likely future climate.

To gain more insight into how our climate is likely to change further, Met Éireann and its partners at home and abroad, are involved in running climate projection models. These complex models, which take huge computer resources to run, combine the dynamics of the atmosphere along with possible greenhouse gas emission scenarios, to try and predict the most likely changes to our climate. When localising these climate models to Ireland we see trends that suggest the observed warming will continue. Climatologists can study different 30 year normal periods in the past as well as the future and can measure the difference, or change, between them, i.e. the ‘Climate Change’.

So returning to the question of future Easters, while the warming trend in Ireland’s climate is expected to continue, our weather will remain hugely variable. So with regard to future Easter Bank Holiday weekends, (also taking into account that Easter falls on a different day every year), it is expected that we will see a combination of warm, cold and normal Easters temperatures over the near future

Weather Live is on RTÉ 1 every night at 7pm on Tuesday 30th April, Wednesday 1st May and Thursday 2nd May.